Stocks on Wall Street ended sharply higher on Friday, driven by a combination of upbeat earnings, strong economic data, as well as receding fears of a 100-basis point interest rate hike by the Federal Reserve.

Despite Friday’s rally, Wall Street’s major averages closed out the week with losses. The blue-chip Dow Jones Industrials Average dipped about 0.2% while the benchmark S&P 500 and the tech-heavy Nasdaq Composite dropped 0.9% and 1.6%, respectively.

On the economic calendar, the focus turns to housing with the latest updates on housing starts , building permits , and existing home sales for the month of June.

The Philadelphia Fed manufacturing survey and latest PMI prints will also be released.

Regardless of which direction the market goes, below we highlight one stock likely to be in demand and another which could see further downside.

Remember though, our timeframe is just for the upcoming week.

Johnson & Johnson (NYSE: JNJ ) could see increased buying activity in the days ahead as the healthcare conglomerate is expected to deliver a beat on earnings and revenue growth when it releases its latest financial results ahead of the U.S. market open on Tuesday, July 19.

Consensus calls for the New Brunswick, New Jersey-based company to post earnings per share of $2.55 for the second quarter, improving 2.8% from EPS of $2.48 in the year-ago period.

JNJ has topped Wall Street’s profit expectations in every quarter dating back to at least Q1 2013, as per InvestingPro+, highlighting the strength and resilience of its business.

Meanwhile, revenue is forecast to climb 2.3% year-over-year to $23.8 billion, benefitting from strong growth in its pharmaceuticals business, medical devices division, as well as its consumer staples health segment, which it plans to split into a new publicly-traded company next year. 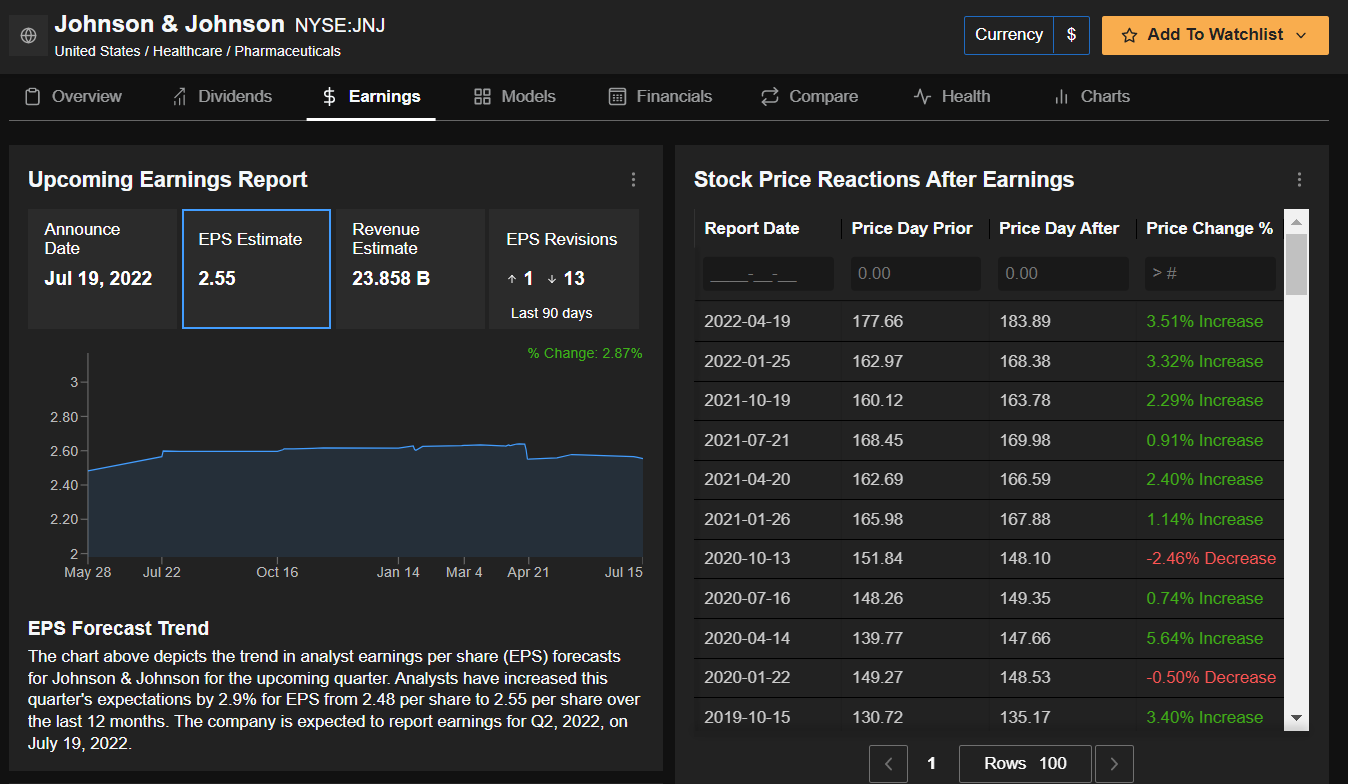 Beyond the top-and-bottom line, JNJ’s outlook for the for the rest of the year will be in focus as the company deals with several headwinds, including a stronger dollar resulting from foreign exchange currency rate fluctuations, an uncertain demand outlook for its Covid-19 vaccine, as well as ongoing supply chain disruptions, and higher costs.

Commentary from executives regarding the health of the economy will also be in focus amid a macro backdrop of accelerating inflation, rising interest rates, and mounting concerns about a possible recession.

At current valuations, Johnson & Johnson - whose shares are up 4.2% year-to-date - has a market cap of roughly $469 billion, making it one of the most valuable pharmaceutical companies in the world.

The diversified healthcare juggernaut - best known for its numerous household names of medications, first aid supplies, and consumer products - has been a relatively bright spot in an otherwise challenging market in 2022, as investors seek high quality defensive-minded blue-chip stocks with reasonable valuations and a strong dividend.

Snap Inc (NYSE: SNAP ), which has seen its shares steadily collapse to their lowest level in more than two years in recent sessions, is anticipated to suffer another challenging week as the parent company of social media messaging app Snapchat prepares to release Q2 earnings after the market closes on Thursday, July 21.

Consensus calls for a loss of $0.02 per share, narrowing from a loss per share of $0.10 from the same quarter a year earlier.

Revenue is forecast to rise 17.1% year-over-year to $1.15 billion, as corporations and small businesses cut back on digital advertising spending amid the current operating environment.

If confirmed, that would mark the slowest pace of annualized sales growth since the second quarter of 2020, according to InvestingPro+, when the coronavirus health crisis disrupted economic activity. 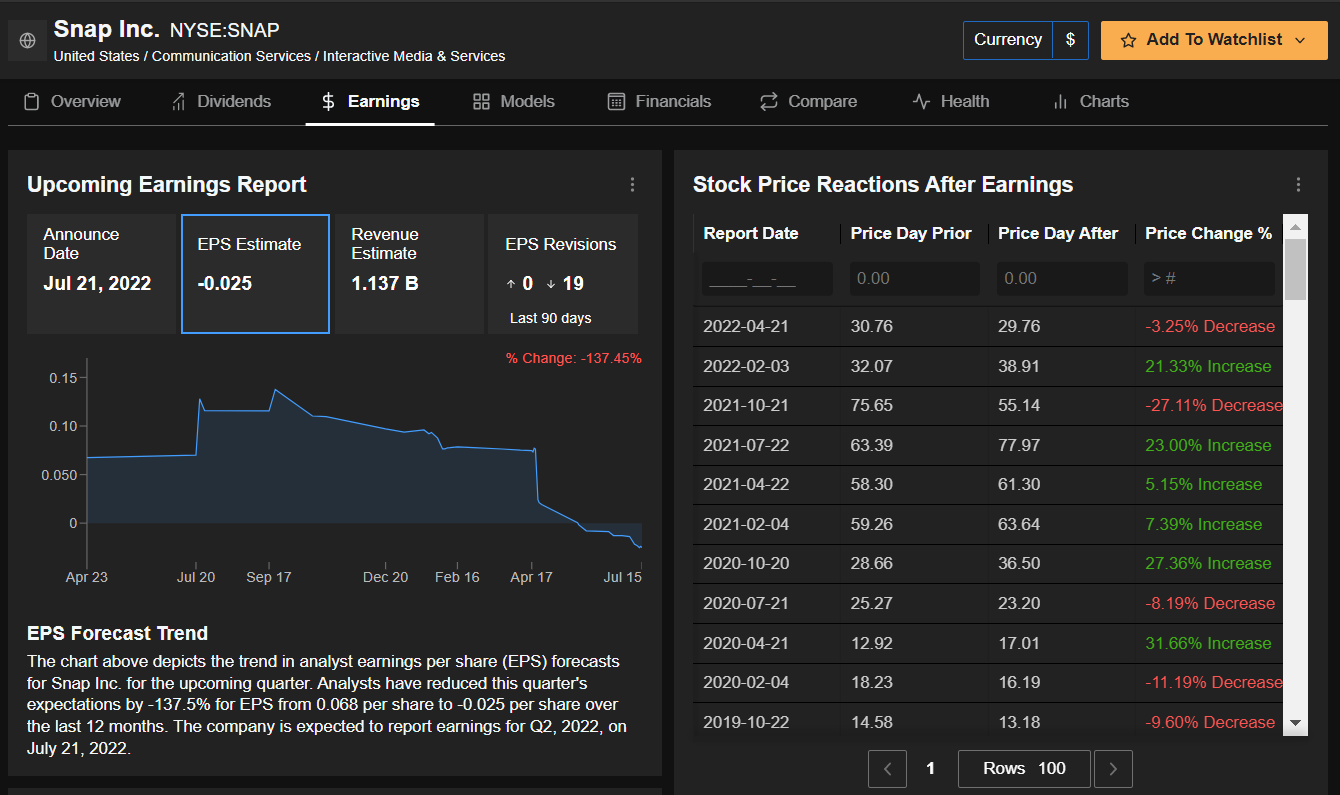 The ad-reliant social media company badly missed profit and sales growth expectations when it released Q1 results in April, due to a weak performance in its core ads business, resulting from privacy changes in Apple’s iOS and growing competition from Chinese video-sharing app TikTok.

Snap then followed that up with an announcement a few weeks later, in which it sounded cautious on its June quarter results, warning that the macroeconomic environment deteriorated “further and faster” than it expected.

Snap, which was one of the big pandemic winners, has seen its stock struggle mightily in the last several months as the Federal Reserve’s rate hike plan led to an aggressive reset in valuations across the frothy tech space.

Snap shares have since staged a modest rebound, closing at $13.65 on Friday, but they still stand roughly 84% below their all-time peak. At current levels, the Santa Monica, California-based tech firm has a market cap of $22.4 billion.

Overall, higher yields and expectations of tighter Fed policy tend to weigh heavily on high-growth tech companies with lofty valuations, as it makes their future cash flows less valuable and hinders their ability to fund their growth.

Disclosure: I have no positions in any stocks mentioned, but I do own shares of the Health Care Select Sector SPDR Fund (XLV), of which JNJ is a top holding.