Cybersecurity stocks have been struggling in recent months amid a general sell-off in tech shares triggered by fears surrounding the Federal Reserve’s plans to tighten monetary policy.

However, the beaten-down sector has managed to stage a mild rebound. Renewed movement into the space received a major push, as Russia's opening salvo in its invasion of Ukraine was a reported malware attack on Ukrainian government sites, as well as on a couple of financial institutions.

First Trust NASDAQ Cybersecurity ETF (NASDAQ: CIBR ) is a prime example of the sector's recent upward trajectory. While the ETF is down 4.4% since the start of 2022, it is significantly outperforming the NASDAQ 100 , which has lost 14.2% over the same timeframe.

The Russia-Ukraine conflict continues to escalate. And as the U.S. and European allies hit back at Russia with a slew of major economic sanctions, the potential for an increase in cyberattacks is growing.

Given the recent spotlight shown on these types of attacks—and our vulnerability to them—we've highlighted three cybersecurity leaders well worth considering as the rampant increase in cyberwarfare fuels demand for innovative solutions.

The tech company looks to be one of the main beneficiaries of the anticipated surge in global cyber spending from corporations and governments worldwide as they respond to digital security threats amid the current geopolitical environment.

The information security specialist has been involved in investigations of several high-profile cyberattacks in the past, including uncovering the activities of a hacker group connected to the Russian Federation that conducted intelligence operations against global targets, primarily in the energy sector.

Not surprisingly, 27 out of the 31 analysts surveyed by Investing.com are optimistic on CRWD stock, forecasting a gain of almost 40% over the next 12 months to $276.47/share. 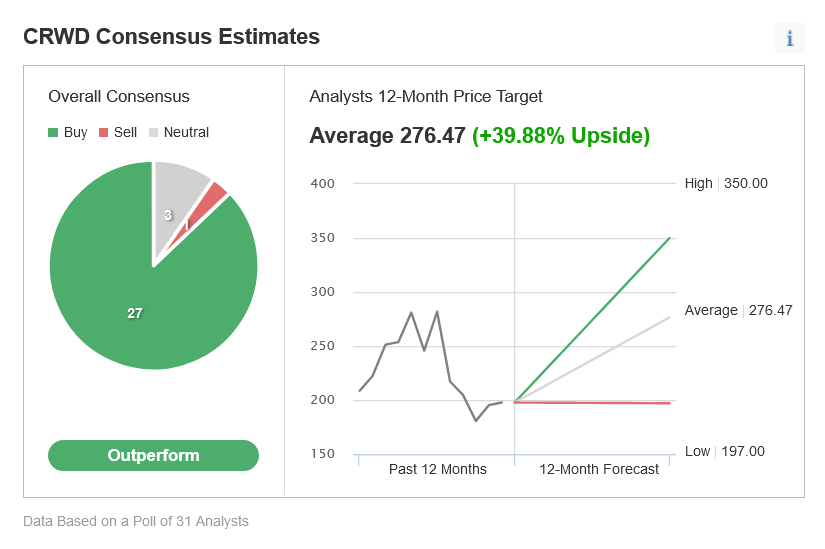 CrowdStrike counts nearly half of the Fortune 100 companies as clients. It has seen its shares endure some turbulence lately amid a sharp reset in valuations across the frothy tech space. After rallying to a record high of $298.48 in November 2021, CRWD—which is down 3.5% year-to-date —tumbled rapidly to a low of $150.02 on Jan. 24.

The Company's shares have since clawed back some losses, closing at $197.64 on Tuesday, but they still stand roughly 34% below their recent all-time peak. At current levels, the endpoint security leader, which recently moved its headquarters location from Sunnyvale, California to Austin, Texas, has a market cap of $45.3 billion.

CrowdStrike is scheduled to report fourth quarter financial results on Wednesday, Mar. 9, after the U.S. market close. Consensus calls for earnings of $0.20 per share, an improvement of 53.8% from the year-ago period, while revenue is expected to surge 55% Y-o-Y to $410.9 million.

Widely considered the leader in the fast-growing identity and access management space, Okta, Inc. (NASDAQ: OKTA ) helps businesses and organizations around the world manage and secure user authentication. It provides cloud software that helps companies manage and secure user authentication into applications, and for developers to build identity controls into applications, websites, web services, and devices.

As such, we believe that the San Francisco, California-based tech firm is a solid pick going forward, considering the anticipated spike in demand for its security tools and products amid elevated threats of cyberattacks related to the Russia-Ukraine crisis.

After seeing its stock surge during the COVID-19 pandemic, thanks to robust demand for its cybersecurity platform, Okta shares are down nearly 18% year-to-date as investor sentiment cooled on high-growth tech shares with sky-high valuations.

Okta, which easily beat expectations for earnings and revenue for its last quarter in early December, is slated to deliver fourth quarter financial results after the U.S. market closes on Wednesday, Mar. 2.

As well, 24 out of 31 analysts surveyed by Investing.com rate OKTA as "outperform," implying nearly 47% upside from current levels to $271.13/share. 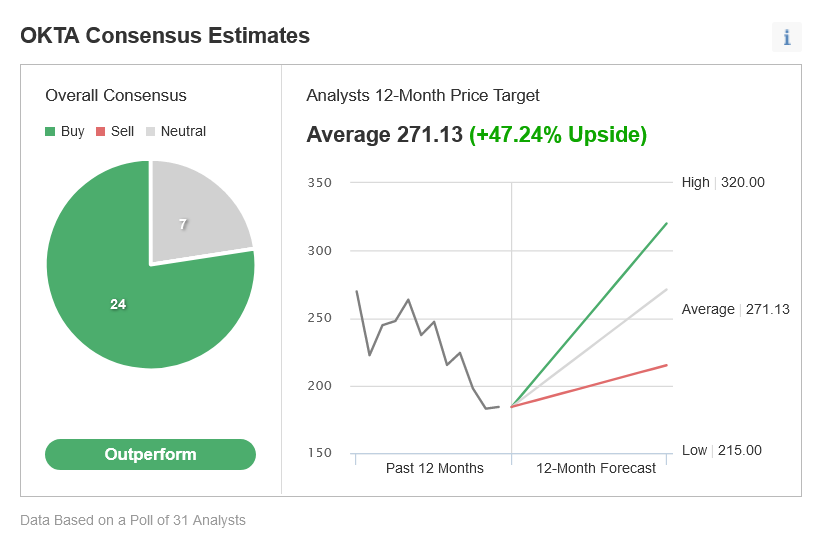 SentinelOne, Inc. (NYSE: S ), which became the highest valued cybersecurity IPO in history after making its trading debut in June 2021, is primed to outperform in the months ahead, as it reaps the benefits of increased cybersecurity spending amid the rampant surge in cyberattacks.

The tech firm made a name for itself when its autonomous endpoint security helped protect its clients, such as AT&T (NYSE: T ) and JetBlue Airways (NASDAQ: JBLU ), from the massive hack that originated at network management software provider SolarWinds (NYSE: SWI ) back in December 2020.

Still, after scoring impressive gains following its initial public offering, SentinelOne has gotten off to a rough start to 2022, with shares of the Mountain View, California-based cybersecurity firm sliding below their IPO price of $35.00 last week for the first time ever in its brief history.

SentinelOne is scheduled to report earnings for the third time as a public company after the closing bell on Tuesday, Mar. 15. As such, it faces no year-over-year comparisons. Consensus estimates call for a loss of $0.18 per share for the fourth quarter, while revenue is forecast to clock in at $60.7 million.

S stock tumbled following its last earnings report released in early December despite delivering results that beat expectations on both the top and bottom lines. The shares fell victim to the broad selloff in highly valued software stocks, especially those that are unprofitable or have lofty price-to-earnings ratios.

Nevertheless, according to Investing.com polling, the average stock analyst price target is around $64.00, representing an upside of approximately 52% from current levels over the next 12 months. 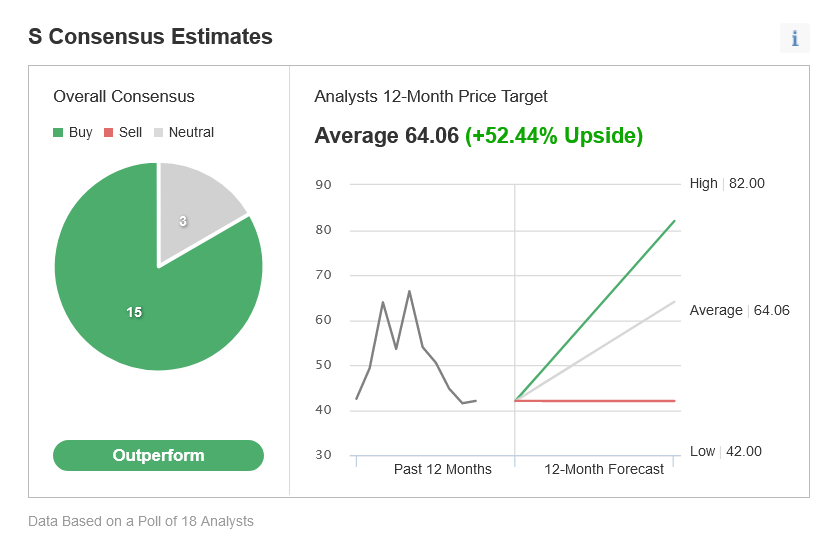