Investors in construction and agricultural machinery heavyweight Deere & Company (NYSE: DE ) have seen their shares gain 26.6% year-to-date and hit a multi-year high of $400.34 on May 10. 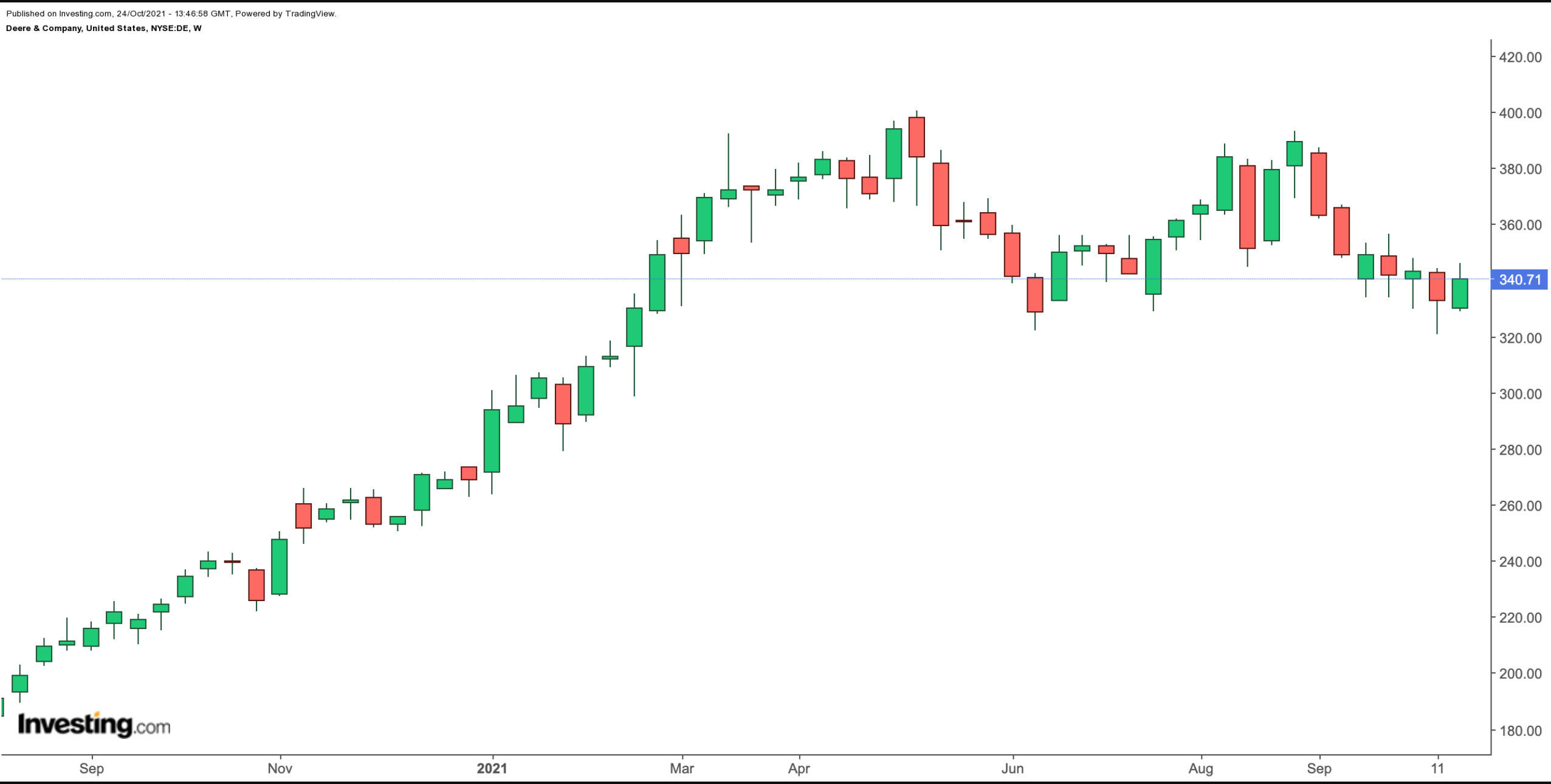 Headquartered in Moline, Illinois, Deere is one of the most important global manufacturers of heavy machinery. Readers are likely to be aware of at least some of the company's machines, which include bulldozers, commercial mowers, generators, tech-heavy tractors and utility vehicles.

On the results, CEO John C. May said:

“We also made strategic investments in the quarter aligned with our smart industrial strategy. They will further our efforts to help our customers achieve improved profitability, productivity, and sustainability through the effective use of technology.”

The company's products are part of daily farming operations domestically as well as internationally. Thus, DE stock has been benefitting from the growth of the agriculture industry. Meanwhile, management has been making acquisitions and investing heavily in technology.

For example, Wall Street is paying close attention to Deere’s autonomous tractors. They represent how disruptive automation technologies might make stocks like DE an important part of the fourth industrial revolution (4IR), which , according to Salesforce.com is:

“A fusion of advances in artificial intelligence (AI), robotics, the Internet of Things (IoT), genetic engineering, quantum computing, and more.”

Prior to the release of Q3 results, shares of the agricultural bellwether were around $365. Since then, they have been volatile and come under pressure, especially since early September. Wall Street expects Deere to release Q4 metrics on Nov. 24.

What To Expect From Deere Stock

Among 23 analysts polled via Investing.com, the stock has an 'outperform' rating. 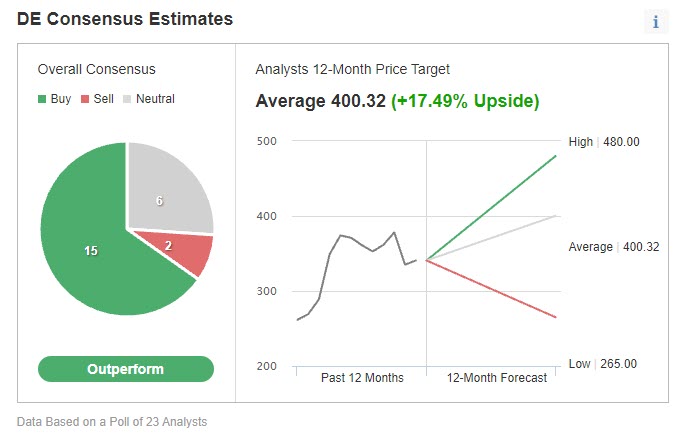 Readers who watch technical charts might be interested to know that a number of DE's short- and intermediate-term oscillators are still flashing caution signals. However, the long-term uptrend remains intact.

As part of the short-term sentiment analysis, it would be important to look at the implied volatility levels for Deere stock options which typically shows traders the market's opinion of potential moves in a security. However, it does not forecast the direction of the move.

DE’s current implied volatility is 24.8, which is lower than the 20-day moving average of 26.0. In other words, implied volatility is trending lower, which might mean that options markets are not expecting big moves in the coming days. However, we might see increased choppiness around the earnings result of Nov. 24.

Our first expectation is for a potential pullback toward the $325 level, after which shares would likely trade sideways while it establishes a new base. In case of such a decline, long-term investors would then find better value.

Investors who are not concerned with daily moves in price and who believe in the long-term potential of the company could consider investing in Deere stock now.

On Oct. 22, DE stock closed at $340.71. Buy-and-hold investors should expect to keep this long position for several months while the stock makes an attempt toward $400, a level which matches analysts’ estimates as well as the recent multi-year high. Such an up move would mean a return of over 17% from the current level.

Readers who plan to invest soon but are concerned about large declines might also consider placing a stop-loss at about 3-5% below their entry point.

2. Buy An ETF With DE As A Main Holding

Many readers are familiar with the fact that we regularly cover exchange-traded funds (ETFs) that might be suitable for buy-and-hold investors. Thus, readers who do not want to commit capital to Deere stock but would still like to have substantial exposure to the shares could consider researching a fund that holds the company as a top holding.

Examples of such ETFs include:

Our third trade is diagonal debit spread on Deere using LEAPS options, where both the profit potential and risk are limited. We have provided numerous examples (for example, here and here) of this type of options strategy that is also know as a "poor person's covered call" on a given stock.

The call options for the underlying stock have different strikes and different expiration dates. The trader goes long one option and shorts the other to make a diagonal spread.

Most traders entering such a strategy would be mildly bullish on the underlying security. Instead of buying 100 shares of Deere, the trader would buy a deep-in-the-money LEAPS call option, where that LEAPS call acts as a “surrogate” for owning the stock.

The delta of this option is close to 80. Delta shows the amount an option’s price is expected to move based on a $1 change in the underlying security.

If DE stock goes up $1 to $341.71, the current option price of $112.05 would be expected to increase by approximately 80 cents, based on a delta of 80. However, the actual change might be slightly more or less depending on several other factors that are beyond the scope of this article.

For the second leg of this strategy, the trader sells a slightly out-of-the-money (OTM) short-term call, like the DE Dec. 17 350-strike call option. This option’s current premium is $10.45. The option seller would receive $1,045, excluding trading commissions.

There are two expiration dates in the strategy, making it quite difficult to give an exact formula for a break-even point in this trade. Different brokers might offer “profit-and-loss calculators” for such a trade setup.

Here, the maximum return, in theory, would be about $1,656 at a price of $350 at expiry, excluding trading commissions and costs. (We arrived at this value using an options profit-and-loss calculator).

By not investing $34,071 initially in 100 shares of Deere, the trader’s potential return is leveraged.

Ideally, the trader hopes the short call will expire out-of-the money (worthless). Then, the trader can sell one call after the other, until the long LEAPS call expires in over two years.