While most of the focus was on those names, a variety of cloud-computing and software companies—which have regained their footing following a sector-wide selloff earlier this year—are still due to report.

We examine three pummeled tech companies worth considering ahead of their upcoming quarterly earnings next week as the sector attempts to rebound from its recent selloff.

Palantir Technologies (NYSE: PLTR ), which provides data analytics software and services to government agencies and large corporations globally, has seen its valuation crumble in the last several months as it fell out of favor

Shares of the data-mining specialist have underperformed the broader market by a wide margin in 2022 as a toxic combination of higher interest rates, accelerating inflation, and slowing economic growth sparked an aggressive reset in valuations across the tech space.

Palantir reported mixed results in the preceding quarter and gave weak revenue guidance. Consensus estimates are for revenue to increase 26% year-over-year (yoy) to a record high of $471.7 million, due to an increase in sales of its data analytics tools and services. But EPS is forecast to fall 25% yoy to $0.03.

Investors will pay close attention to Palantir’s core government business, which accounts for more than half of its total sales. Palantir's technology is used for intelligence gathering and military purposes and, in Q1, revenue in this segment slightly missed expectations, increasing just 16% yoy.

Total commercial revenue, which outperformed, increasing 54% in Q1 will also be closely watched as Palantir has been trying to diversify its customer base and expand into the health care, energy, and manufacturing sectors. The customer count will also be of interest as it surged 86% yoy in Q1.

Watch out for comment from management on future sales, as there are concerns that it will not hit its goal of generating top-line growth of 30% or more through 2025. 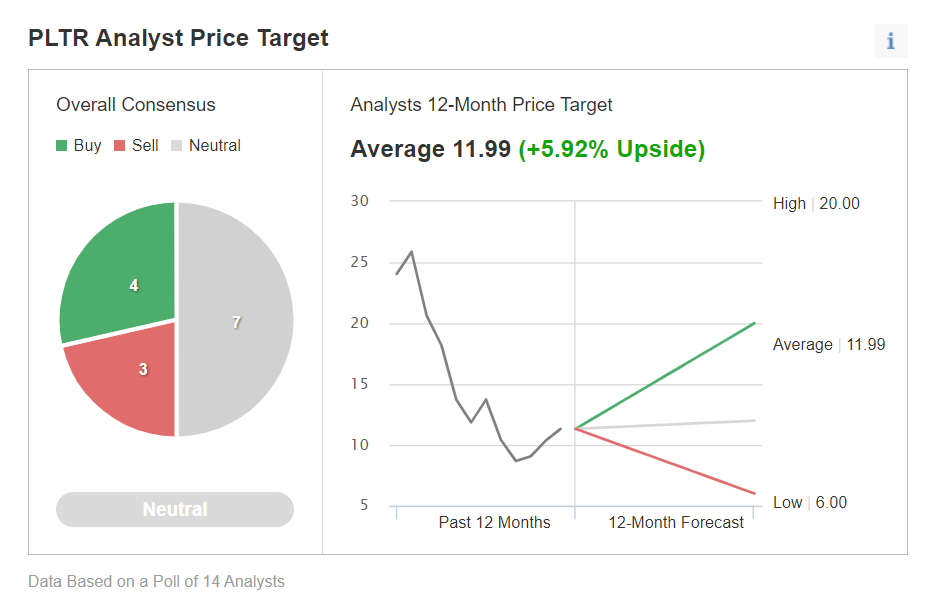 Most analysts remain generally bullish on Palantir’s stock, as per an Investing.com survey.

After soaring in 2021, Upstart Holdings (NASDAQ: UPST ), which uses artificial intelligence tools to evaluate personal loan applications for banks, has seen its stock struggle this year.

Upstart blew past analyst expectations in the previous quarter but lowered future guidance which fell far short of estimates. Consensus estimates are for a 21% yoy increase in revenue to $235.3 million due to increased demand from small banks and credit unions. But EPS is forecast to tumble 86% to $0.07. 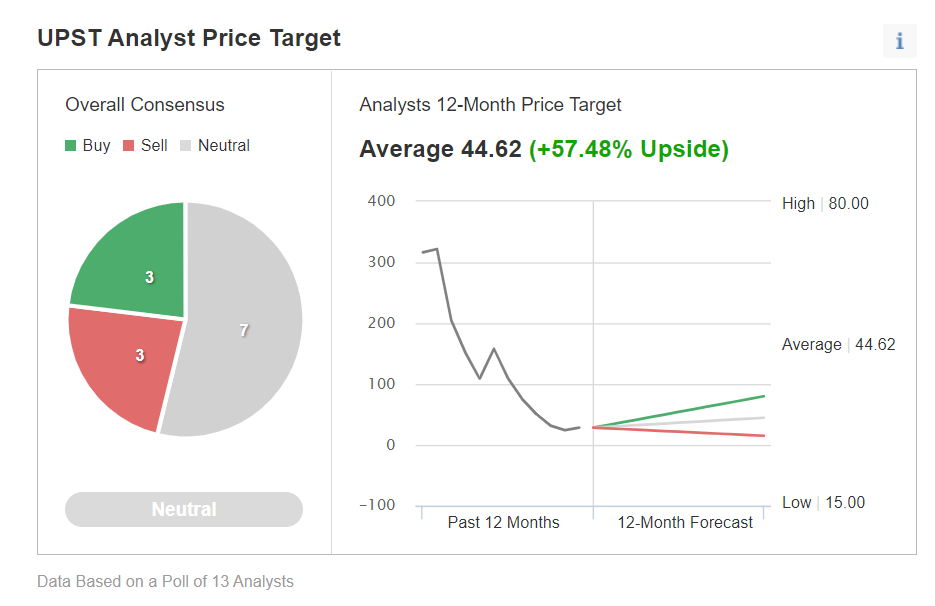 Despite its sharp year-to-date decline, most analysts surveyed by Investing.com rate Upstart’s stock either as ‘outperform’ or ‘hold’.

The average fair value for Upstart’s stock on InvestingPro is $39.95, a potential 41% upside. 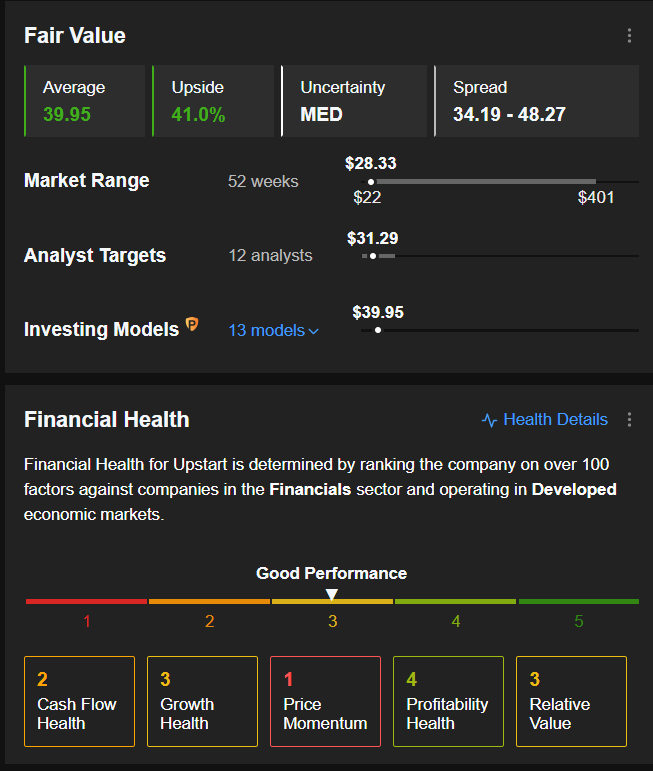 Coinbase Global (NASDAQ: COIN ), which is widely considered as the leading cryptocurrency exchange for buying and selling Bitcoin , has fallen out of favor with investors this year.

The shares soared to an all-time high of $429.54 on its first day of trade in April 2021 but are now down about 65% ytd. But the shares have since shown signs of bottoming, rebounding by 117% in the last four weeks.

Coinbase reported disappointing revenue in Q1. Q2 consensus expectations call for a Q2 loss per share of $1.21 due to higher operating expenses and increased spending.

Investors will focus on Coinbase’s update regarding monthly transaction users (MTUs) which fell to 9.2 million in the last quarter, slightly missing expectations. Total trading volume will also be eyed after declining 8% yoy to $309 billion in Q1.

Comments from Coinbase’s management on future revenue and user growth for the remainder of the year will be of interest. 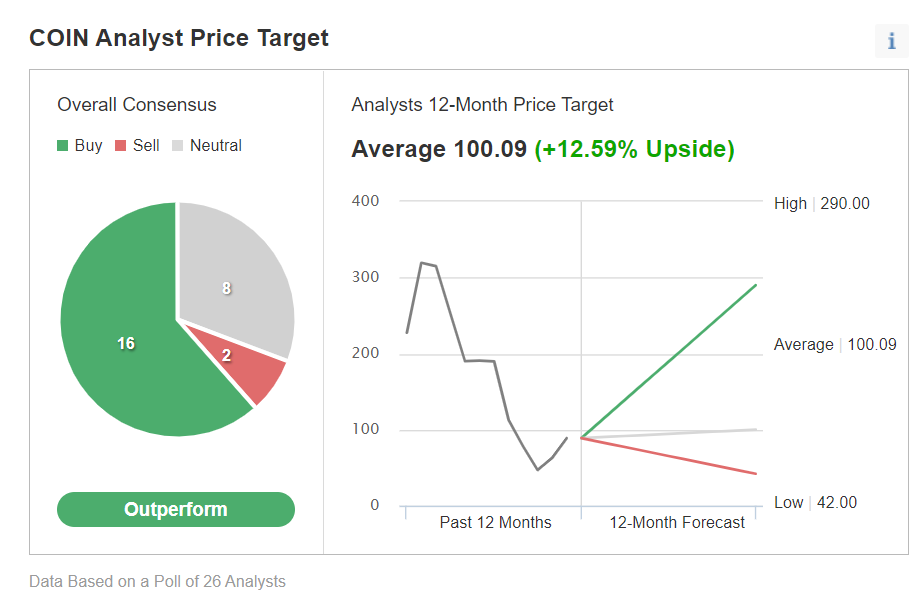 The consensus recommendation according to an Investing.com survey is ‘outperform’ with fairly high conviction.

Disclaimer: At the time of writing, Jesse had a position in COIN shares. The views discussed in this article are solely the opinion of the author and should not be taken as investment advice.