I began my career in markets in 1977 when I took a summer job at the world’s leading commodity merchant company in those days, Philipp Brothers. I came to the business at a fortuitous time in my teens, with inflation gripping the global economy, pushing raw material prices to record highs. In 1980, the crude oil and precious metals trading departments contributed enough profits to purchase Salomon Brothers, a Wall Street boutique bond trading company expanding into other sectors of the financial markets.

The markets changed in the 1980s as financial markets boomed and commodities sank. Philipp Brothers may have bought Salomon, but the management shifted, and the financial firm dominated the relationship. Both companies are long gone. Each profited from incredible bull markets in the asset classes where they were experts and groundbreakers.

During my forty-year career, I have seen bull markets and bear markets, but I have never seen anything quite like the cryptocurrency market. The turbo bull asset class has risen from obscurity in 2010 to a variety of financial market instruments that become more mainstream each day.

Whatever you think of cryptos, you have to admire the head-spinning price action. And since traders and speculators embrace volatility because it creates a paradise of opportunities, cryptocurrency has been the Garden of Eden.

Bitcoin and Ethereum are the digital currency leaders, but they are very different. Even though Bitcoin continues to lead with a market cap nearly double Ethereum’s, the second-leading crypto out of an asset class with over 15,550 members is growing faster than Bitcoin and may eventually overtake the leader.

Another set of new highs and corrections

On Nov. 10, Bitcoin and Ethereum reached their most recent record highs. 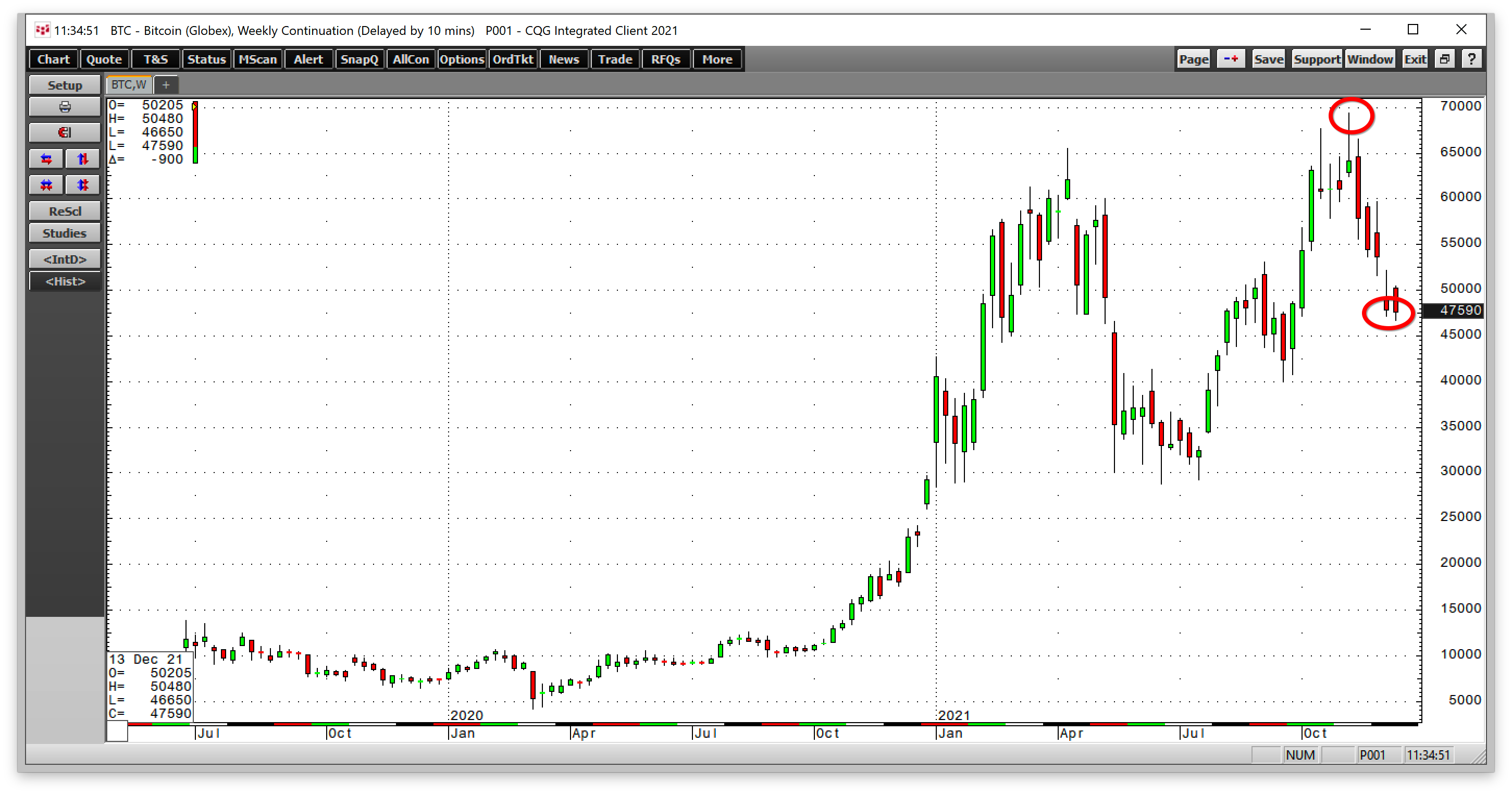 The weekly chart shows the rise of nearby Bitcoin futures that took the price to a high of $69,355. 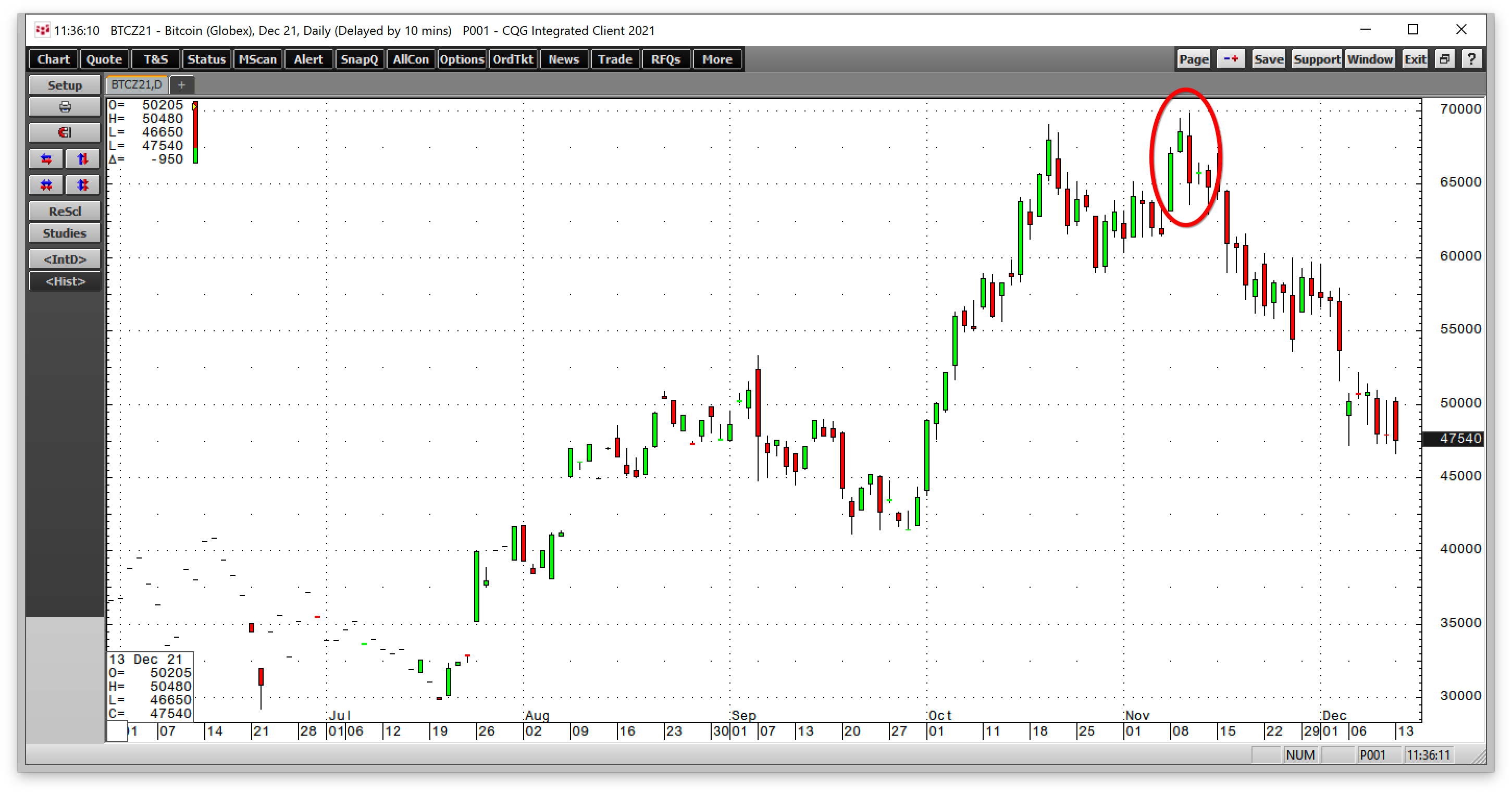 The daily chart shows the bearish key reversal trading pattern on Nov. 10 as Bitcoin made a new record high and settled the session below the previous day’s low. At Bitcoin's most recent low of $46,650 on Dec. 13, the price corrected by 32.7%. 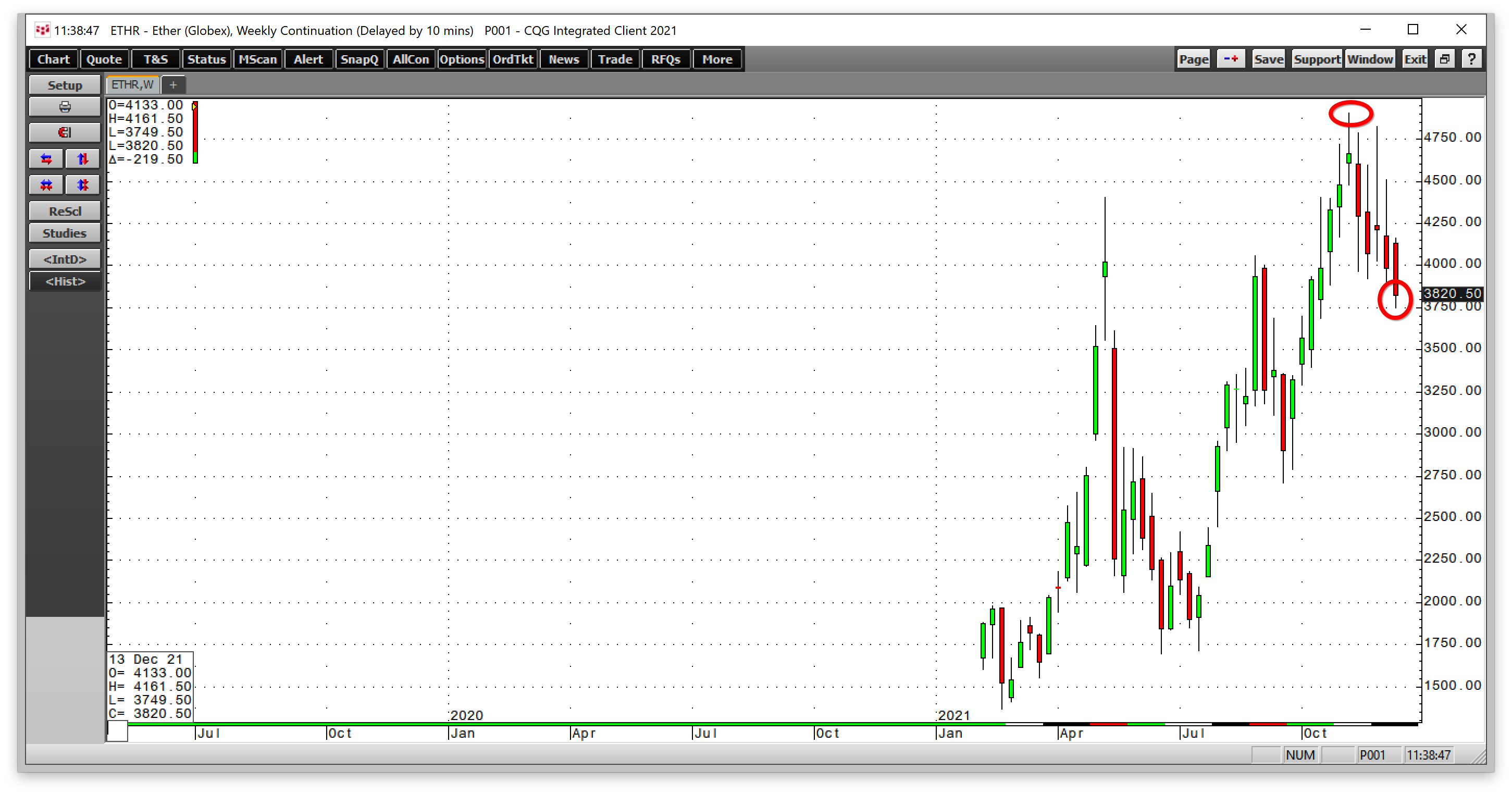 The weekly Ethereum futures chart shows the second-leading cryptocurrency rose to a new high at $4902.75 on Nov. 10. 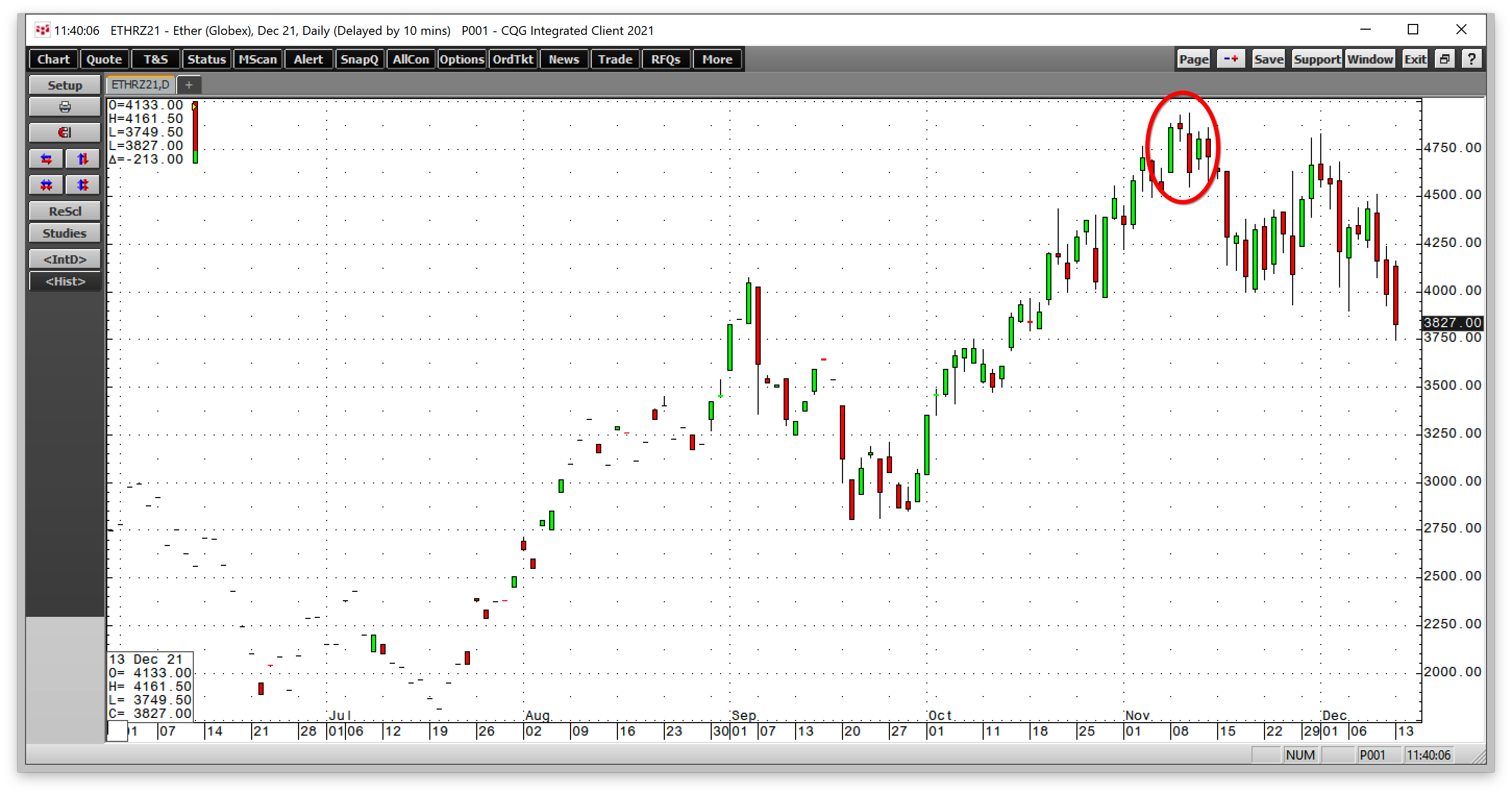 The daily chart highlights the same bearish key reversal trading pattern on Nov. 10 that has taken Ethereum to its most recent low at $3749.50 on Dec. 13. Ethereum declined by 23.5% from the Nov. 10 high. Ethereum’s price action has not been pretty, but it outperformed Bitcoin during the correction that began with the technical reversals.

Ethereum has outperformed Bitcoin throughout 2021

Despite the bearish price action over the past weeks, Bitcoin and Ethereum have posted impressive gains in 2021. 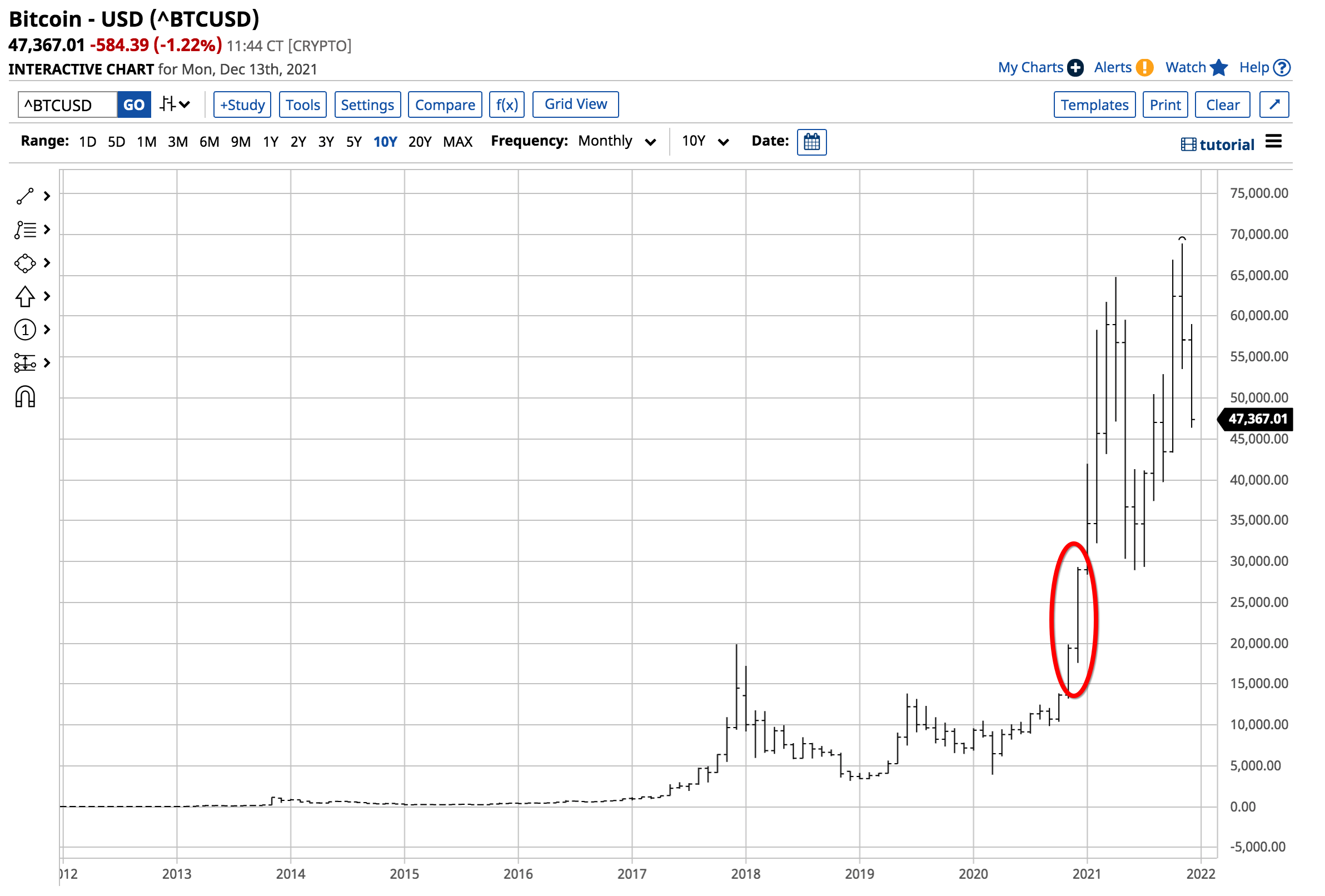 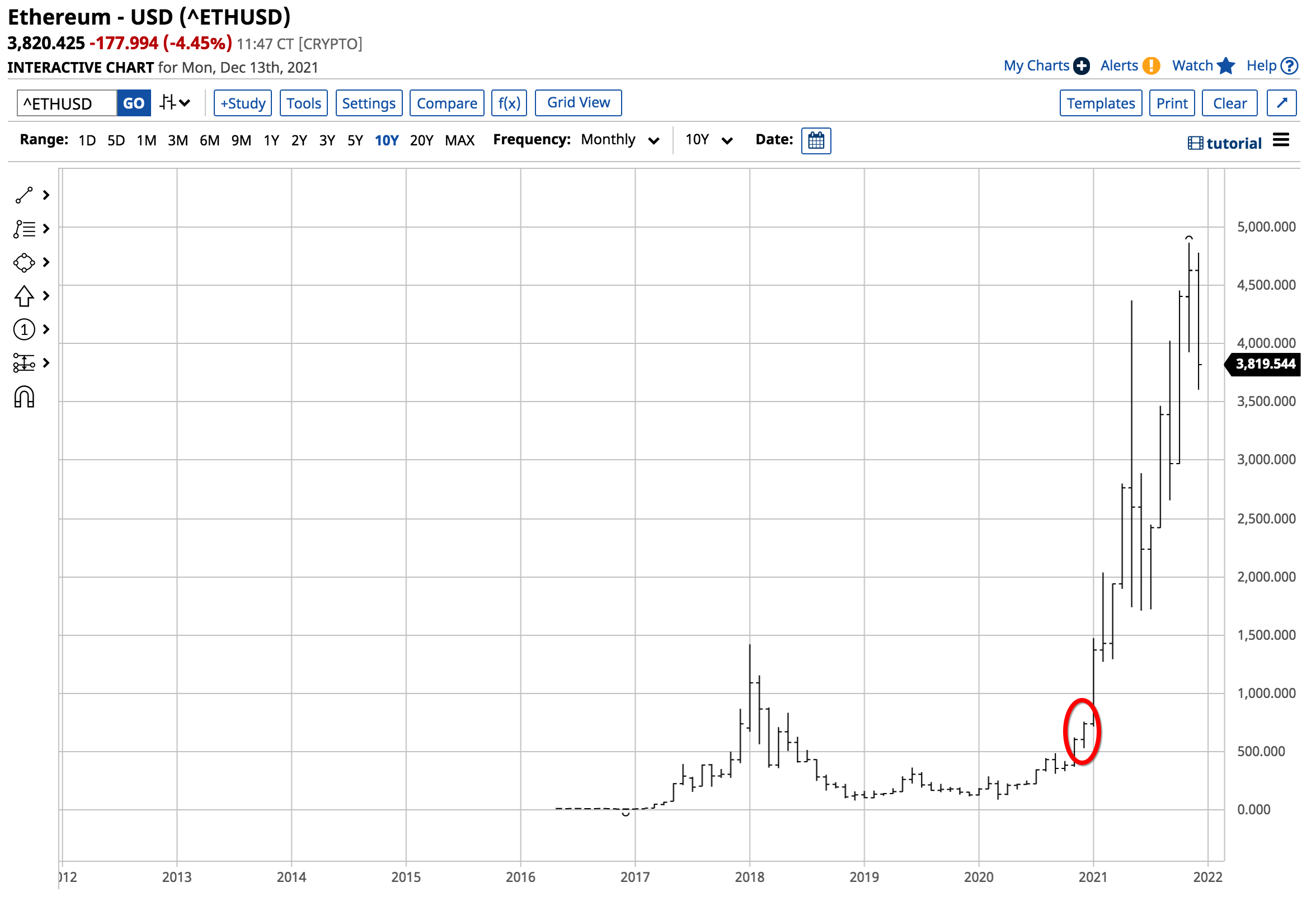 Ethereum has outperformed Bitcoin during 2021 as well as during the recent price implosion that followed the new record peaks for both digital tokens. Three factors support the second-leading crypto over Bitcoin and could continue to cause Ethereum to gain against the leader of the crypto pack.

Bitcoin is the father of the cryptocurrency asset class. While it is not clear if Bitcoin came before blockchain or vice versa, the two will always be linked as Satoshi Nakamoto’s 2008 white paper, “Bitcoin: A Peer-to-Peer Electronic Cash System,” gave birth to the asset class by defining the “genesis block of Bitcoin.” In a classic chicken-and-egg dilemma, we may never know if Nakamoto came up with Bitcoin or blockchain first.

Meanwhile, Bitcoin is purely a cryptocurrency. Ethereum, however, is a platform.

Ether is Ethereum’s native token on the Ethereum blockchain. Bitcoin is a primary store of value and medium of exchange. Ethereum is a general-purpose blockchain. Many of the over 15,500 cryptocurrencies in the asset class use the Ethereum platform or a derivative of Ethereum’s protocol as transactions are faster than on the Bitcoin blockchain.

The world of cryptocurrency mining has been extremely energy-intensive. In real estate, every professional knows that location is the critical factor for value. In the cryptosphere, energy consumption has become a hot-button issue as the world addresses climate change, not to mention the fluctuating cost of energy itself.

Bitcoin requires 707 kWh of electricity, while Ethereum’s consumption is 62.56 kWh. High-end computer processors compute complex algorithms on the Bitcoin blockchain. Ethereum 2.0 on the other hand, will require far less power, making it a greener cryptocurrency.

As well, Ethereum operates on a proof of stake model, giving mining power based on the percentage of coins held by a miner. Proof of work, which Bitcoin runs on, requires massive amounts of energy consumption to fuel computational power.

Reason 3: Bitcoin is the grandfather, Ethereum the more fertile son

Bitcoin may have started it all, but it must continue to prove itself as the most efficient and valuable cryptocurrency in order to keep its position as the leader of the pack. According to CoinMarketCap on Dec. 13, Bitcoin’s market cap stood at around $900 billion while Ethereum’s was a little over half that level at $456 billion. However, in 2021, Ethereum’s market cap grew at a faster pace than Bitcoin’s.

Undoubtedly, Bitcoin is the grandfather of asset class, but Ethereum has been far more fertile. Some of the most successful cryptos trading today are related to the Ethereum protocol, including Litecoin (LTC), Cardano (ADA), Polkadot (DOT), Bitcoin Cash (BCH), Stellar (XLM), Dogecoin (DOGE), Binance Coin (BNB), as well as many more.

As we head into 2022, I expect Ethereum to continue outperforming Bitcoin. Its protocol is faster, more flexible, and proof of stake requires far less energy than proof of work.