With some of the largest U.S. companies reporting their quarterly earnings during the upcoming week, investor focus will likely be squarely on corporate America and the financial health of its most high profile corporations.

During the five-day period ahead, about a third of S&P 500 companies are scheduled to release their most recent numbers along with their outlook forecasts for the remainder of this year, including such tech giants as Facebook (NASDAQ: FB ) and Amazon, and industrial names, such as, Boeing (NYSE: BA ) and Caterpillar (NYSE: CAT ).

Amid signs of strong economic recovery, investors are concerned about global supply-chain disruptions that have pushed prices higher, threatening future growth. Of the companies that have already reported, nearly 84% beat estimates. Earnings are so far expected to be up 34.8% over last year, based on actual reports and estimates, according to I/B/E/S data from Refinitiv.

During this crucial week for the Q3 earnings season, we will be focusing on three key tech mega-caps whose earnings could help clarify whether they are still benefiting from the pandemic-driven demand surge that pushed their shares to record high prices in recent months:

iPhone maker, Apple (NASDAQ: AAPL ) is scheduled to report its fiscal 2021, Q4 earnings on Thursday, Oct. 28 after the market close. Analysts, on average, project the company will post $1.23 a share profit on sales of $84.85 billion. 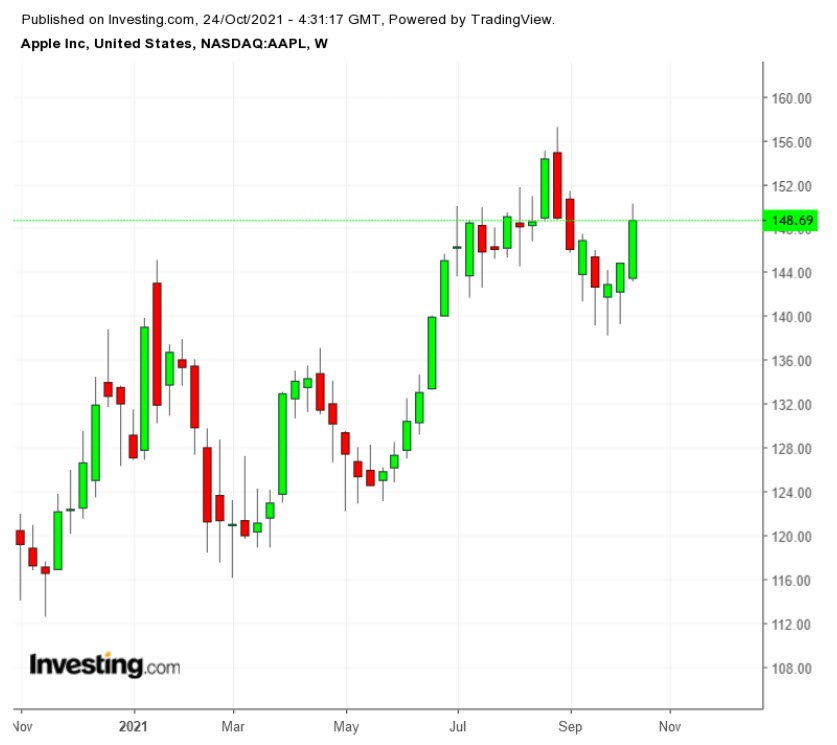 Shares of Apple haven’t moved much during the past three months on concerns that industry-wide chip shortages and other supply chain issues could hurt sales, especially during the crucial holiday season.

Apple rolled out new MacBook Pros, a Mac mini, MacBook Airs, new AirPods, new iPads, and updated Apple Watches this year to take advantage of the work-from-home environment and the pent-up demand for the tech gadgets. However, Bloomberg reported last week that shoppers looking for these devices this holiday season are facing delays, threatening to undercut what could be Apple’s biggest sales quarter in its history.

Online retail juggernaut Amazon (NASDAQ: AMZN ) will also report Q3 earnings after the market closes on Thursday. The consensus is that the world’s largest e-commerce company will report $111.62 billion in sales, producing per share profit of $8.91. 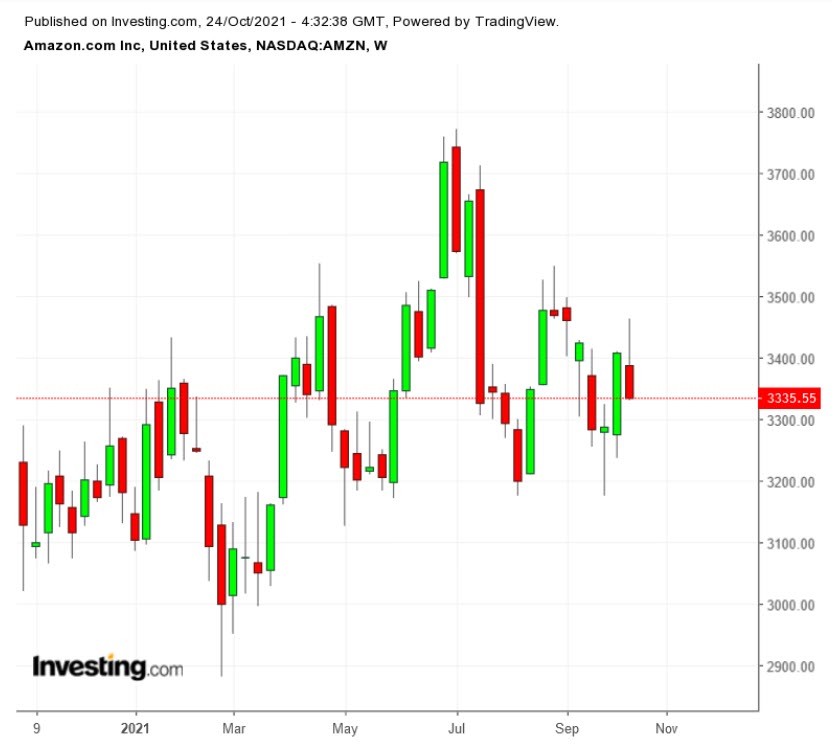 Since the outbreak of COVID-19 in March of 2020, Amazon’s sales have surged as people, staying at home, made more and more of their purchases online. But there are signs that the pandemic-related boom is cooling.

In July, Amazon reported sales and gave a forecast that fell short of expectations as economies opened and some consumers returned to their old purchasing habits. Investors will likely focus on this slowing trend for the company’s core e-commerce business, which Chief Financial Officer Brian Olsavsky said would continue through the year.

That’s the main reason that Amazon shares fell about 8% in the past quarter. They closed on Friday at $3,335.55.

Microsoft (NASDAQ: MSFT ) is scheduled to report its fiscal 2022 Q1 earnings after the market close on Tuesday, Oct. 26. The software and cloud computing behemoth is expected to post EPS of $2.02 on sales of $43.93 billion, according to consensus forecasts. 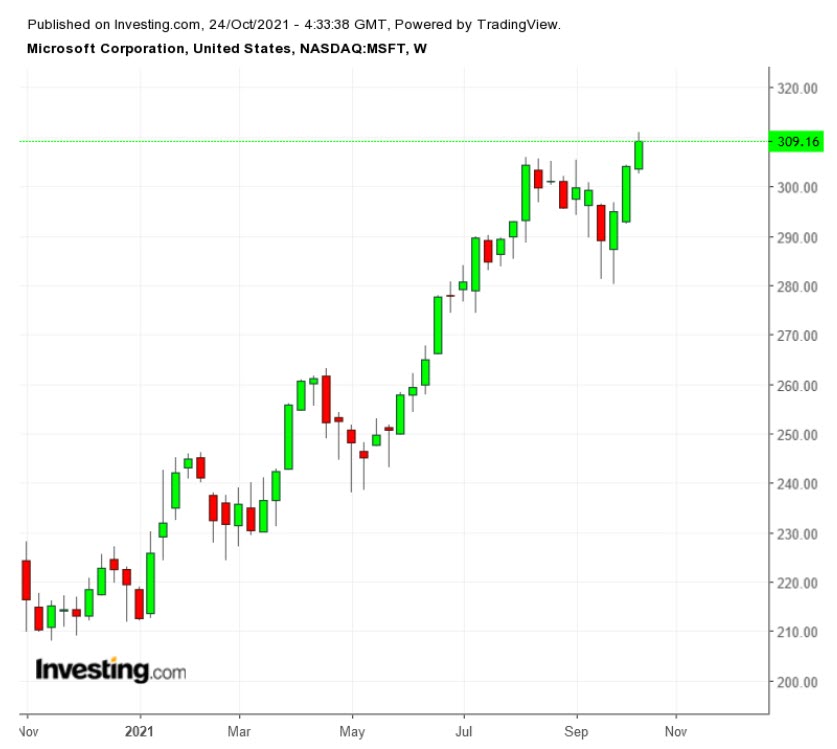 If the past provides any clues , Microsoft should show robust momentum fueled by a surge in technology investments and the strength of its cloud computing and core Office products lineup.

The Redmond, Washington-based software and infrastructure company is benefiting from the increased demand for connectivity as people continue to work and interact socially from home. As well, investors expect businesses and governments will continue to spend on their transition to cloud computing—which has been a key area of expansion for the corporation in recent years.

Azure, Microsoft's cloud business, saw sales jump 51% in the previous period. However, this disappointed some investors because it was partially fueled by currency fluctuations—the number drops to 45% without that FX boost. Azure revenue had gained 50% from a year earlier for the two prior quarters, not taking into account currency fluctuations.