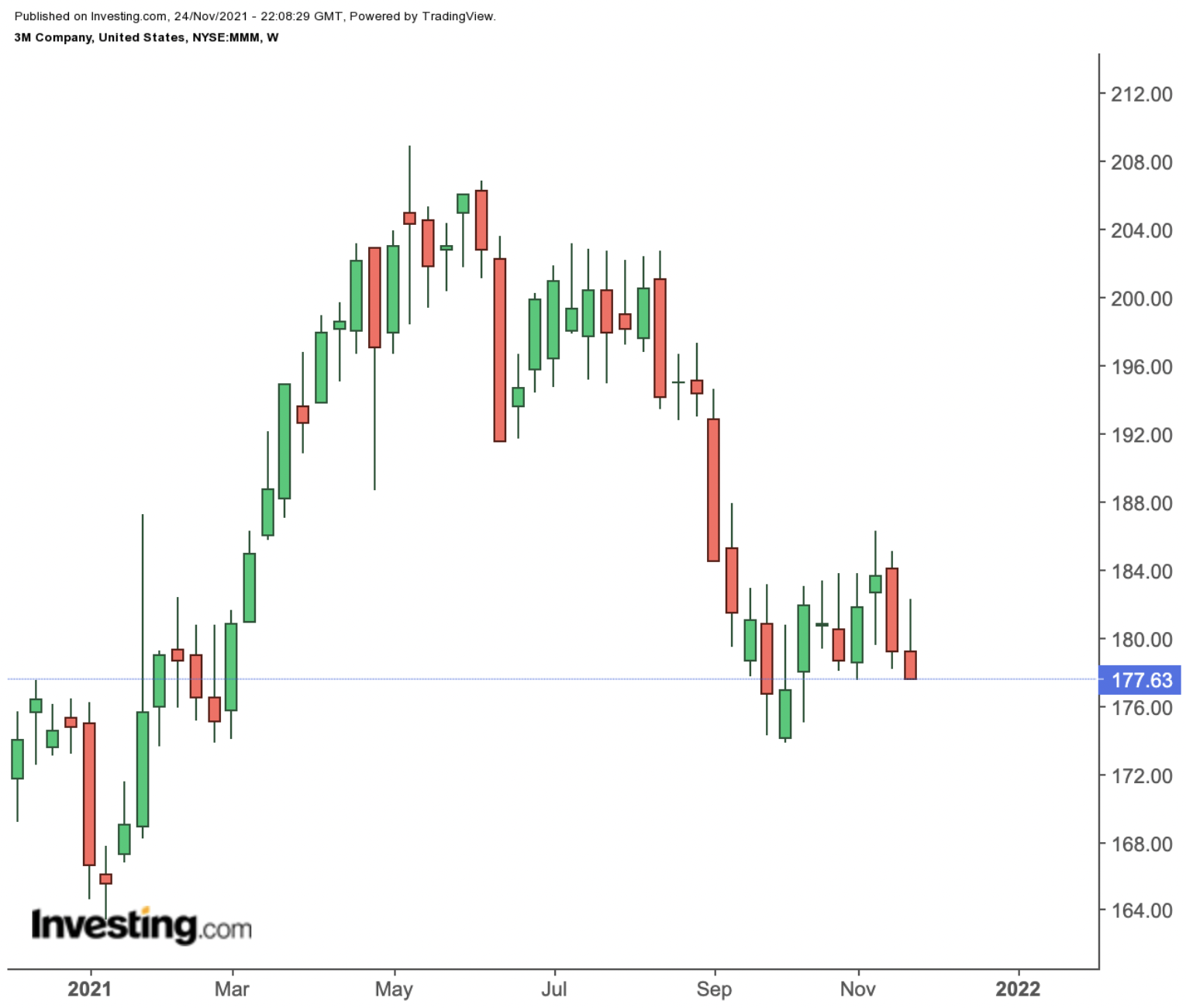 3M, whose history goes back to 1902, manufactures and markets more than 60,000 products that range from adhesives to abrasives, automotive aftermarket products, medical protective gear and tapes. Some of its well-known products and brands include FOREO, Nexcare, N95 respirator masks, Post-it, Scotch, Scotch-Brite, Scotchgard, and Thinsulate.

MMM released Q3 earnings in late October. Revenue came in at $8.9 billion, up 7.1% year-over-year. Earnings per share were $2.45. During the quarter, the group returned $1.4 billion to shareholders via dividends and share repurchases.

“In the face of continued global challenges, the 3M team executed well and delivered broad-based organic growth, along with strong margins and cash flow.”

Despite management’s upbeat tone, investors have not been pleased with the metrics. Since the announcement, they have hit the ‘sell’ button, in part, due to concerns over supply-chain issues and inflationary pressures.

What To Expect From 3M Stock

Among 20 analysts polled via Investing.com, MMM stock has a “neutral” rating. 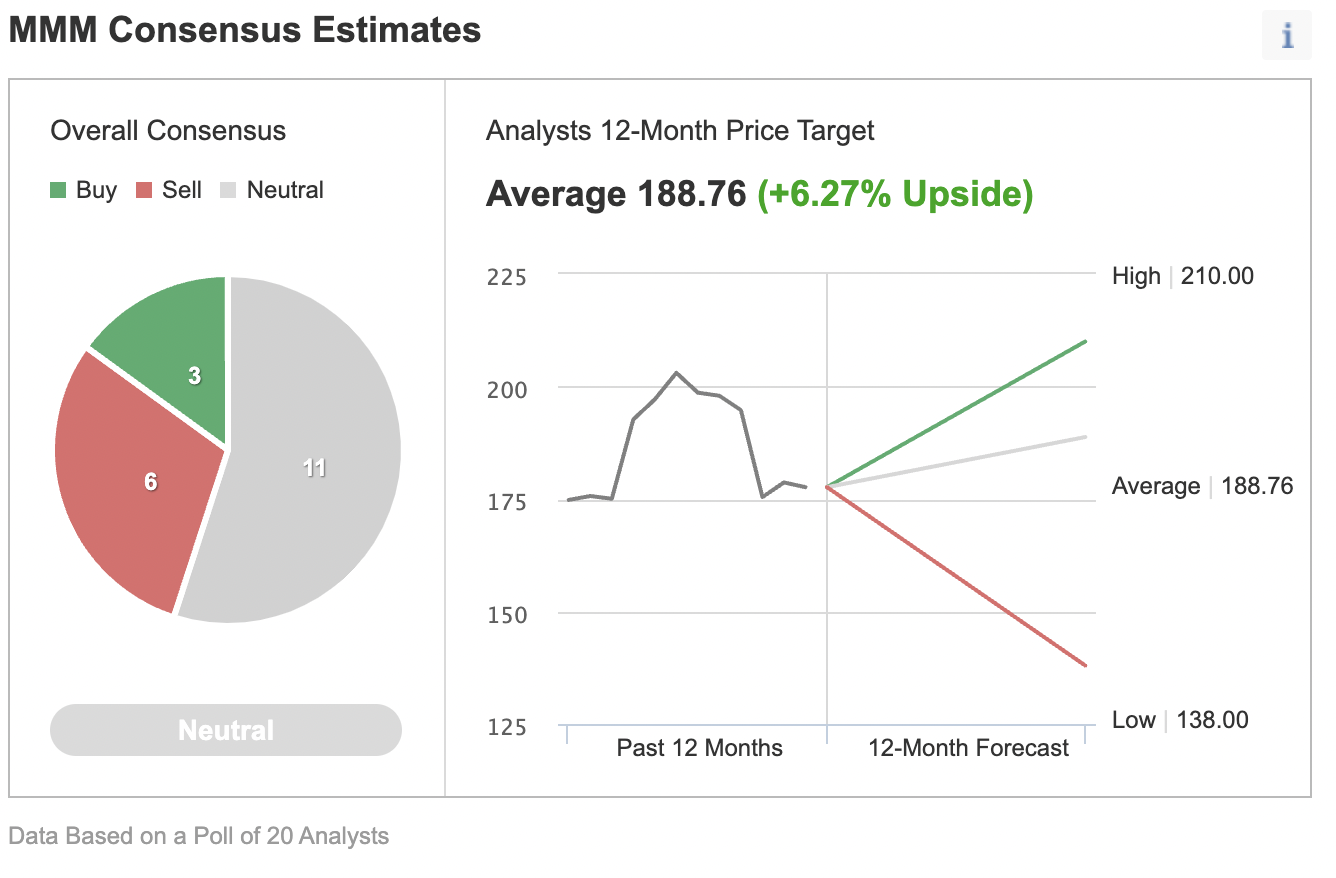 Similarly, according to a number of investing models, like the 10-year Discounted Cash Flow (DCF) model growth exit method or those that might consider dividends and P/E multiples, the average fair value for MMM stock stands at $239.50.

In addition, despite the price decline in the past several weeks, a number of MMM stock’s short- and intermediate-term indicators are still cautioning investors.

As part of the short-term sentiment analysis, it would be important to look at the implied volatility level (IV) for MMM stock options, which typically shows traders the market's opinion of potential moves in a security. This indicator, however, does not forecast the direction of the move.

MMM’s current implied volatility is 19.6, which is higher than the 20-day moving average of 16.9. In other words, IV is trending up, which might mean that the options market is expecting more choppiness in the coming days.

Our first expectation is for MMM stock to continue to slide toward $170, or even $165, after which it should find support. Then, it will likely trade sideways between $170 and $180 and establish a new base. Afterwards, a new bullish move is likely to start.

Investors who are not concerned with daily moves in price and who believe in the long-term potential of the company could consider investing in 3M stock now.

On Nov. 24, the stock traded at $178.60. Buy-and-hold investors should expect to keep this long position for several months while the stock makes an attempt toward $188.76, a level which matches analysts’ estimates. Such an up move would mean a return of about 5%. Those long-term investors would also receive dividends.

Readers who plan to invest soon but are concerned about large declines might also consider placing a stop-loss at about 3-5% below their entry point.

Anyone who does not want to commit capital to MMM stock, but would still like to have exposure to the shares, could consider researching a fund that includes the company as a holding.

Examples of such ETFs include:

Our third trade is a diagonal debit spread on MMM using LEAPS options, where both the profit potential and the risk are limited. We have provided numerous examples of this type of options strategy (e.g., for Apple (NASDAQ: AAPL ) and two semiconductor stocks. Since the strategy involves options, it will not be appropriate for all investors.

These call options for the underlying stock have different strikes and different expiration dates. The trader goes long one option and shorts the other to make a diagonal spread.

Most traders entering such a strategy would be mildly bullish on the underlying security. Instead of buying 100 shares of 3M, the trader would buy a deep-in-the-money LEAPS call option, where that LEAPS call acts as a surrogate for owning the stock.

The delta of this option is close to 80. Delta shows the amount an option’s price is expected to move based on a $1 change in the underlying security.

If MMM stock goes up $1 to $179.60, the current option price of $52.75 would be expected to increase by approximately 80 cents, based on a delta of 80. However, the actual change might be slightly more or less depending on several other factors that are beyond the scope of this article.

For the second leg of this strategy, the trader sells a slightly out-of-the-money (OTM) short-term call, like the MMM Apr. 14, 2022, 180-strike call option. This option’s current premium is $11.05. The option seller would receive $1,105, excluding trading commissions.

There are two expiration dates in the strategy, making it quite difficult to give an exact formula for a break-even point in this trade. The maximum potential is realized if the stock price is equal to the strike price of the short call on its expiration date. So the trader wants the MMM stock price to remain as close to the strike price of the short option (i.e., $180 here) as possible at expiration (on Apr. 14, 2022), without going above it.

Here, the maximum return, in theory, would be about $1,176 at a price of $180 at expiry, excluding trading commissions and costs. (We arrived at this value using an options profit-and-loss calculator).

By not investing $17,860 initially in 100 shares of 3M, the trader’s potential return is leveraged.

Ideally, the trader hopes the short call will expire out-of-the money (worthless). Then, the trader can sell one call after the other, until the long LEAPS call expires in more than two years.