In the most recent market rally Amazon.com (NASDAQ: AMZN ) is nowhere to be seen. Shares of the e-commerce juggernaut have been lagging far behind other top US technology firms this year, on concerns that the revenue-boom that started during the pandemic has run its course. In addition, for this e-tail giant, there are no near-term catalysts to get excited about.

Amazon stock, which closed yesterday at $3,392.49, has hardly budged this year, while the NASDAQ 100 Index surged about 20%. Amid this underperformance, investors don’t expect a massive earnings beat when the Seattle-based company reports its third quarter earnings following the Wall Street session. 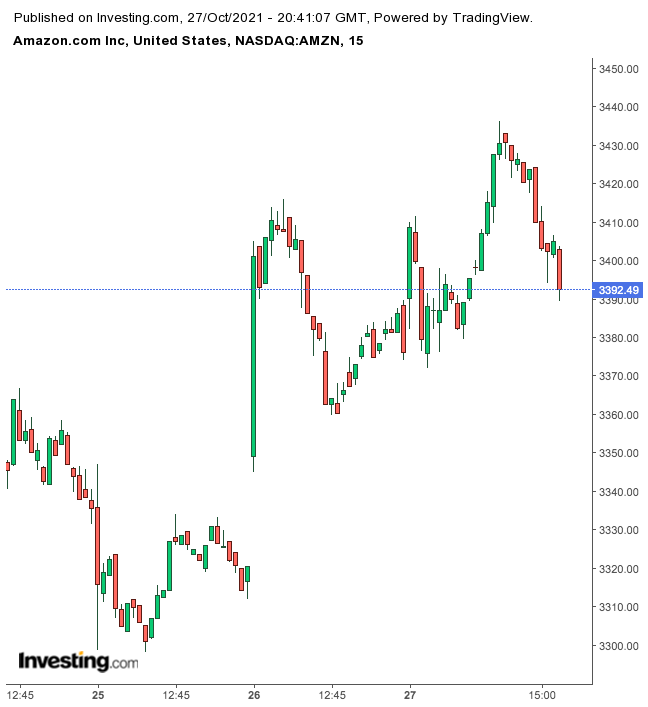 According to analysts' consensus forecast, Amazon will report $8.91 a share profit, about 27% lower than the same period last year, on sales of $111.6 billion. The company also made it clear in its previous guidance that sales will ultimately return to a more normal trajectory.

The company's core e-commerce business began to slow at the same time that founder Jeff Bezos handed over the executive role to a long-time lieutenant Brian Olsavsky. In a conference call in July, the new CEO didn’t mince words regarding the situation, telling analysts the slowdown in sales will continue through the remainder of the year.

Other headwinds impacting the global economy are surging costs and supply-chain disruptions. Amazon continues to hire at a rapid pace, adding 64,000 workers in the second quarter in what has been a tight labor market. The recent wage increases the company has implemented represent “one of the bigger elements of inflation in our business right now,’’ according to Olsavsky.

Though the current environment doesn’t look too favorable for buying Amazon stock—which surged 78% in 2020—there is also little reason to sell this name, in our view.

Investors shouldn’t ignore the powerful momentum in the company’s other businesses, including its advertising segment as well as from Amazon Web Services, the company's cloud unit. AWS revenue jumped 37% in the second quarter—the biggest year-over-year sales jump in two years. The company’s “other” revenue category, primarily advertising sales, gained 87%.

That’s the main reason the majority of Wall Street analysts remain bullish on the company’s long-term prospects and its leading position in e-commerce. Though some have adjusted their price targets on the stock as sales slow, many believe any lingering weakness offers a buying opportunity.

Of 52 analysts polled by Investing.com, 50 had a buy rating on AMZN, labelling it a stock that will 'outperform.' The average 12-month price target provided by respondents was $4,145, or a +23% upside potential. 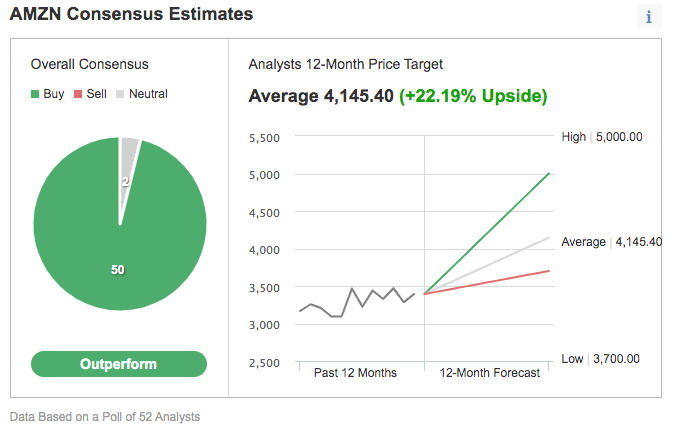 The best days of Amazon’s e-commerce sales are in the rearview mirror after they exploded during the pandemic’s online buying spree. This trend is likely to be reflected in today’s earnings, which could also show pressure coming from cost escalations and the supply-chain issues.

That being said, any post-earnings weakness in its shares offers an entry point for investors sitting on the sidelines, given the company’s rapidly expanding revenue from its cloud and ad businesses, along with its still-dominant position in the e-commerce arena.