Another week, and more uncertainty for the Rand , as the continuous swings of fortune continued.

We certainly are in for some interesting days as we head into the close of 2021.

The Rand continues to flirt with the R15/$ level - and the weeks ahead have events aplenty coming up that could well provide the triggers for some major moves in the coming weeks and months.

And so let us get into the full review of this last week and see if we can pick up any insights into what those coming weeks hold.

Here were the biggest talking points from the 5 days:

So to start with the Rand's movement, we saw the local unit open at the R14.85 level, having finally made a mini-comeback after heavy September losses.

But now it was a question whether the momentum could be kept up - as the Rand has been playing catch with that R15/$ for the past few weeks, and no clear breakout has arrived just yet.

All eyes were on the US as the week began, as the "debt-ceiling" got a lot of attention. It has become another major party-lines debate, as the national default loomed. Eventually on Wednesday, Republican Mitch McConnell crumbled under pressure from Biden and said that they would allow a vote to go through for a fixed dollar amount.

While it seems there is no other option, this is no solution whatever with the US debt situation spiraling out of control. There is only one way that it is going to end - BADLY...and it is only now a matter of time. It is a house built on the sand, an economy built in a flood plain.

Of course, this remains a blame game between the two parties, with McConnell stating the following:

“To protect the American people from a near-term Democrat-created crisis, we will also allow Democrats to use normal procedures to pass an emergency debt limit extension at a fixed dollar amount to cover current spending levels into December,”

Regardless of who created the situation, it is a good time for every investor to take stock of their position - and their Dollar & US exposure, to make sure they are spread to manage risk. This debt crisis is going to blow up, and at this rate, very much sooner rather than later.

To get back to the Rand though, which was being affected by events like these, we saw the market push back weaker again.

And then the tide turned.

Some relief, as Wednesday's close saw us back sub R15/$ again.

It had already been a wild ride, and it was only Wednesday! 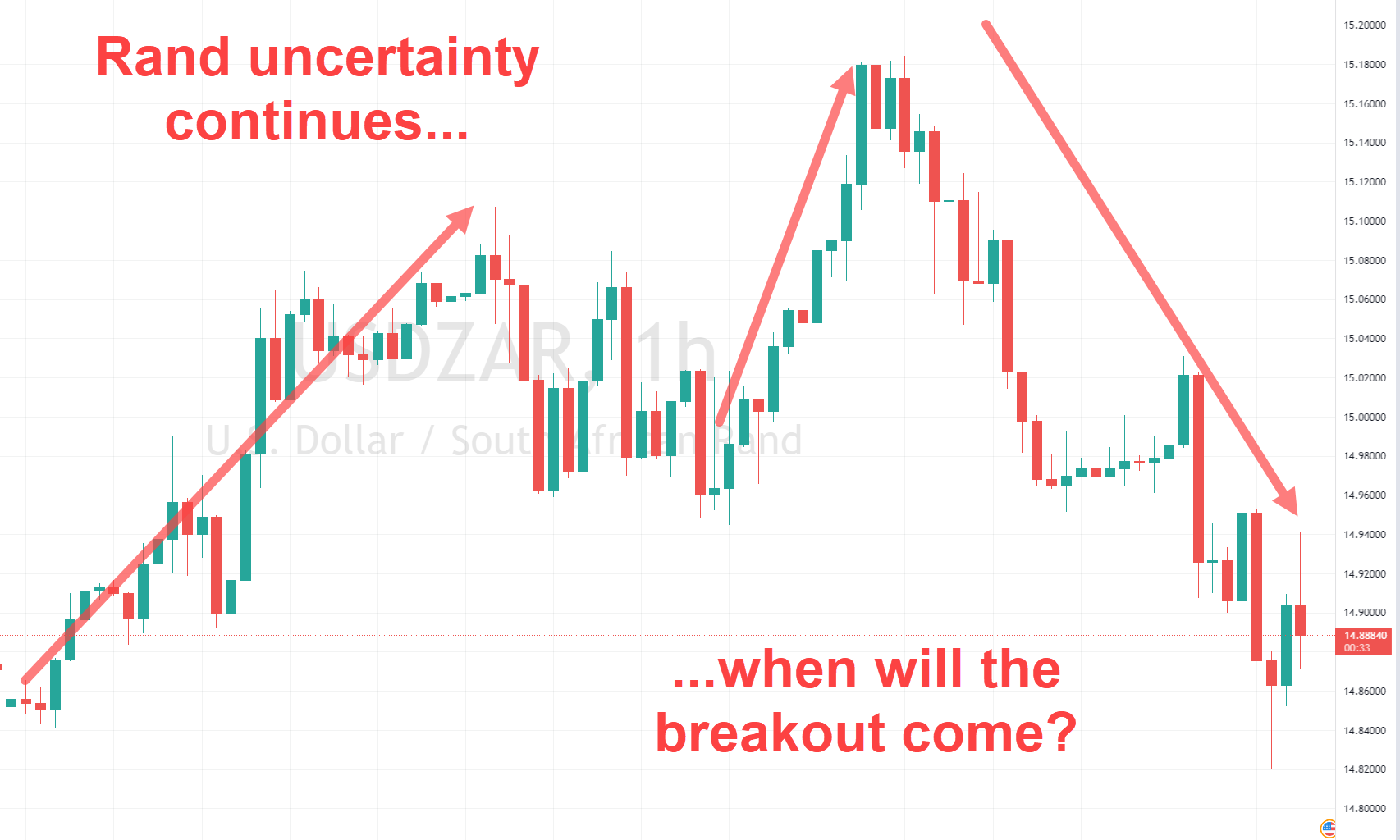 And then in other news...

Eskom's power situation is an ever evolving problem, which has now gone beyond there just being a lack of supply - there is now a bigger issue which affects the long term sustainability of the company, and ability of SA to compete on the world stage. That issue is dirty energy - a major talking point amongst world leaders, and what is becoming a bargaining chip too. Eskom is now ranked as the worst energy provider company on earth, producing more dirty energy than any other energy provider, causing massive pollution. This kind of reputation is very bad for the country as a whole, but perhaps will result in something coming of talks with richer countries to move Eskom towards a cleaner energy future...however, Thursday they warned of load shedding at short notice, and power systems being under severe pressure - something we have come to expect?!

Commodities have surged higher, with oil hitting upwards of $80 a barrel, and fuel prices suffering as a result. Americans are now paying more for gasoline than they have for the last 7 years. Bloomberg's commodity index has now hit a record high, as the world rebound of economies is hitting massive shortages. There are only a handful of the major commodities that have not seen huge increases in price over the course of this year, with natural gas , gasoil, heating oil , gasoline, WTI crude and Brent crude leading the way. Even coffee is sitting upwards of 50% up just this year!

Jobless claims continue to provide inconsistent indications of the economic situation in the US, as another drop of 38,000 came this last week, beating expectations. Continuing claims also fell nearly 100,000. The total of those receiving benefits under all programs tumbled to 4.17 million as enhanced pandemic-related programs ran out. Perhaps it is that finally now with these programs ended, there is incentive to get back to work! Many hospitals have been left under-staffed, as money just landing in everyone's accounts for free meant that there was no benefit to actually doing work when you could get paid for doing nothing…

And before we knew it, it was Friday, and with it was the US Non-farm Payrolls announcement, which showed that a paltry 194,000 jobs were added last month, way below consensus expectations of 460,000, showing that the labour market recovery remains shaky. But it was mixed with some good news, as the unemployment rate dropped from 5.2% to 4.8%.

The Rand reacted positively to this news, pushing down to hit a low of 14.78 (just as forecast in Wednesday's update to our subscribers), but then reversed fortunes to end the week back above 14.90.

And that was the wrap!

And so as we head further into the week, we have some fundamental data that could provide some triggers:

And then of course, there are growing concerns at an overbought stock market, inflation fears due to surging commodity prices and global supply chains disruptions (that are likely to impact the global economy sooner rather than later) - and the damaging effects (and agenda) of the increasingly authoritarian lockdowns and mandates globally.

All of these provide a background for a jittery market and continued volatility for global markets in general and the Rand in particular.

But once again we will focus on what the market patterns themselves are telling us, based on our Elliott-wave based forecasting system.