When Apple (NASDAQ: AAPL ) reports its latest quarterly earnings tomorrow, the biggest investor concern the iPhone-maker needs to address is its ability to save the crucial holiday season from disruptions caused by the current global supply-chain crunch.

Speculation that the company will slash its projected iPhone 13 production targets for the last three months of the year pressured its shares early this month. 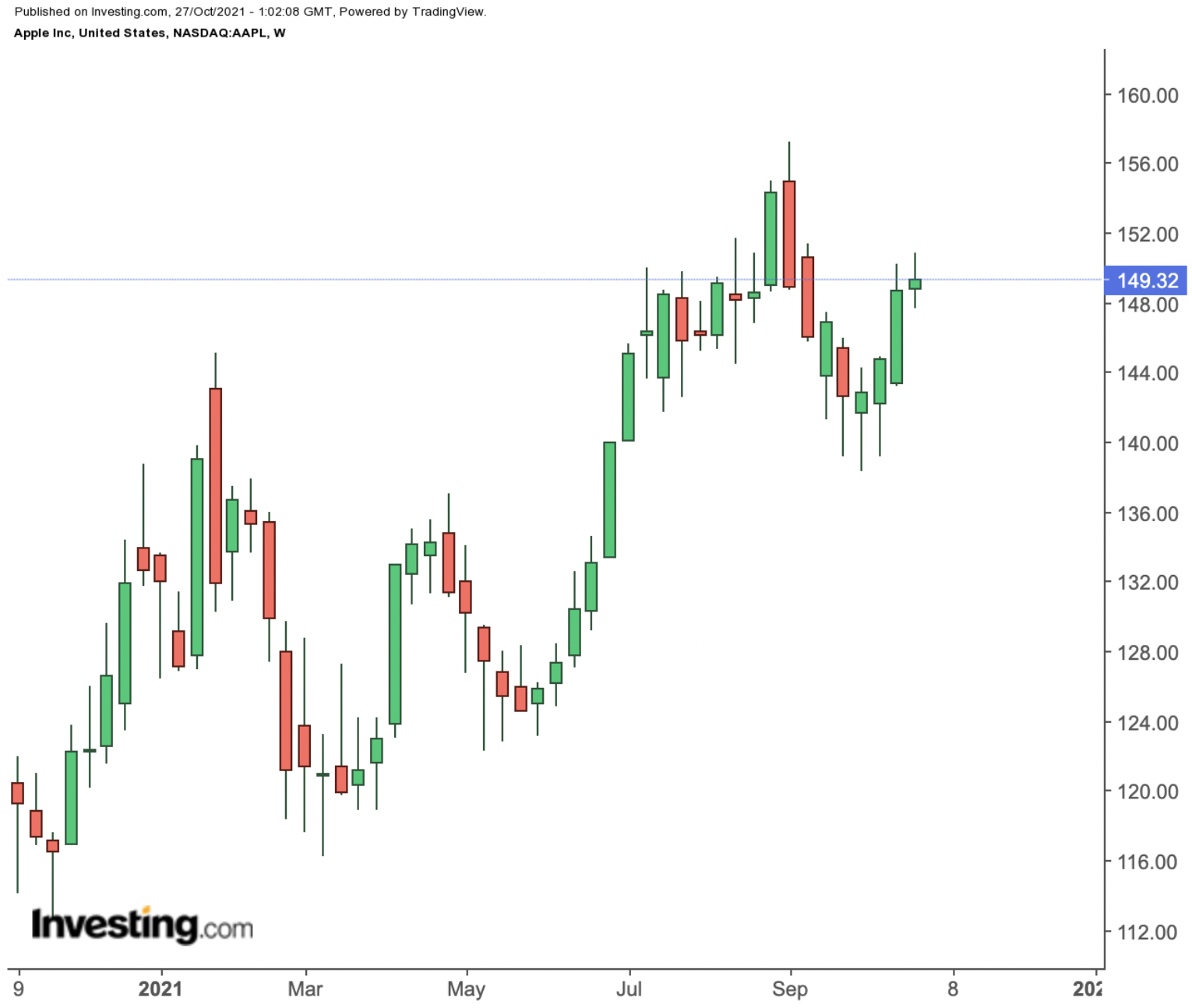 The company had expected to produce 90 million new iPhones, but it’s now telling manufacturing partners that the total will be lower because Broadcom (NASDAQ: AVGO ) and Texas Instruments (NASDAQ: TXN ) are struggling to deliver enough components, according to a recent report from Bloomberg.

The year-end quarter is anticipated to be Apple’s biggest sales blitz yet, the report says, generating about $120 billion in revenue. That would be up about 7% from a year earlier —and more money than Apple made in an entire year a decade ago.

Apple shares closed Tuesday at $149.32, up about 12% for the year. That performance still lags the tech-heavy NASDAQ 100 Index , which rose more than 19% during the same period. The stock is down about 5% from its September all-time high.

Despite the iPhone production uncertainty, long-term investors should add to their positions if tomorrow’s guidance disappoints. There are two reasons behind our bullish call on Apple. First, the demand for Apple’s new products continues to be very strong, helped by its latest launches, and it will come back once the products are available, meaning sales are just being delayed and not lost.

The California-based tech giant revealed the iPhone 13 and a smart watch with a new look during its annual September event. Last week, the company introduced a pair of MacBook Pro laptops and new AirPods. The latest iPhones are Apple’s second with 5G capabilities, a key enticement pushing users to upgrade.

Wedbush analyst Dan Ives recently said iPhone 13 pre-orders were 20% ahead of Apple's launch last year and China was leading the way. Further, other analysts noted that the average selling price (ASP) will be higher given the strong demand for the iPhone 13 Pro model.

Also, Apple valuations have become reasonable when compared with other mega-cap technology stocks. Apple is now trading at 26 times earnings projected over the next 12 months, down from 28 in early September. When the company reports results for its fiscal fourth quarter tomorrow, analysts expect it will deliver more than $20 billion in profit, an increase of 60% from the same period a year ago.

For long-term investors aiming to earn a decent return through dividends and capital appreciation, Apple stock continues to remain a great choice.

Plus, with more than $200 billion in cash on hand, Apple is in an enviable position to further increase its share repurchase program and its dividend. In April, Apple launched a $90-billion share repurchase plan, bigger than the market valuations of more than 80% of the companies in the S&P 500 Index.

Apple may disappoint some shareholders by lowering its iPhone sale forecast for the last quarter of the year on Thursday as supply-chain disruptions begin to bite. But any post-earnings weakness should be a buying opportunity for long-term investors, given the huge pent-up demand for its products and services.