Changpeng Zhao is the founder of Binance, the world's largest cryptocurrency exchange in terms of volume. Known as CZ, he's also the company's CEO and the wealthiest crypto entrepreneur in the world, with a net worth of nearly $100 billion.

CZ launched Binance in July 2017 in China, after raising $15 million in an initial coin offering. However, he left the Asian country as Chinese crypto regulation became increasingly stringent; the company is now registered in the Cayman Islands. CZ became a billionaire in 2018.

Binance and CZ have run into issues with regulators and governments in Europe and the US. In May 2021, Bloomberg reported that the crypto exchange was under investigation by the US Justice Department and the IRS. The probes reportedly involve money laundering and tax evasion offenses. Still, the company and CZ’s net worth continue to swell.

Earlier this month, Binance announced it would invest $200 million in Forbes, a global media company focusing on business, investing, technology, entrepreneurship, leadership, and lifestyle. Forbes is more than a century old, with its first issue published on Sept. 15, 1917.

At first glance, that seems like an odd divergence for CZ and Binance whose core business is clearly digital currency focused. So why would the company be expanding its horizons to include the media brand, something that seems totally out of sync with their cryptocurrency portfolio?

Binance’s website states it is the “world’s largest crypto exchange.” However, it also says it cannot provide services to US cryptocurrency users. Instead, it directs US market participants to Binance.US (BAM Trading Services), a US-regulated cryptocurrency trading platform that offers services in more than 50 cryptocurrencies with “low fees.”

Binance trades an average of $2 billion in cryptocurrency volume each day and processes more than 1.4 million transactions per second, offering round-the-clock customer support. Binance coin (BNB) is the native asset on Binance Chain, a blockchain software system developed by Binance and its community.

BNB has multiple forms of utility and powers the Binance ecosystem as its underlying 'gas.' As of Feb. 24, BNB was the fourth leading cryptocurrency by market cap. At $339.09 per token, BNB has a total value of more than $56.15 billion.

As of this writing, the token is sandwiched between two stablecoins in terms of ranking— Tether is in third place, USD Coin ranks fifth.

As a pure, non-stablecoin cryptocurrency, BNB has the highest market cap after Bitcoin and Ethereum . 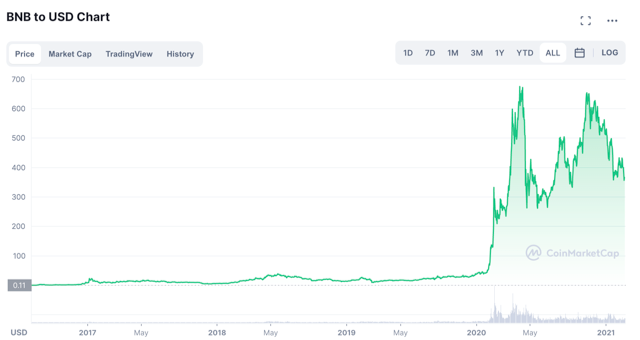 Binance USD (BUSD) is a US dollar-denominated stablecoin approved by the New York State Department of Financial Services. BUSD is a partnership between Binance and the New York-based financial and technology firm Paxos Trust Company. The chart shows that BUSD has traded around $1 since September 2019. While it briefly moved to a high of $1.0524 in March 2020 and a low of 97.0 cents against the US dollar during the same month, BUSD has been an effective stablecoin competing with Tether (USDT) and USD Coin (USDC). However, while USDT ranks third and USDC fifth in total market cap, BUSD’s ranking is 10th among all cryptos, with an $18.3 billion market cap at the $0.9997 per token level on Feb. 24.

The investment is part of a $400 million private investment arrangement set up to allow Forbes to go public by merging with a special purpose acquisition company or SPAC.

Binance’s CEO was direct when addressing the reason for the investment, saying:

“As Web3 and blockchain technologies move forward and the crypto market comes of age, we know that media is an essential element to build widespread customer understanding and education.”

The investment is another step in taking cryptocurrencies and blockchain into the mainstream.

Power Of The Press Plus Power Of Technology

The press is a powerful force, as it shapes opinion and behavior. The press has moved from print newspapers over the past centuries to the myriad forms of media that have been the children of technological advances currently. Forbes, a brand that's more than a century old, provides Binance a platform for its growth and amplification.

In recent years, other businesses and business leaders have invested in established press organizations. In 2013, e-commerce giant Amazon’s founder and CEO, Jeff Bezos, bought the Washington Post newspaper. Within three years, the paper doubled its web traffic and became profitable. Previously, the iconic newspaper based in the US capitol struggled to survive in the wake of the 2008 global financial crisis.

The press has always been a powerful force, whether it's government-controlled or independent. Binance’s investment in Forbes brings blockchain and crypto technology or fintech to the media outlet while affording a highly recognized, even iconic distribution channel to a leading cryptocurrency exchange. The investment could create synergies that benefit both over the coming years.