Statistics South Africa (Stats SA) recorded the liquidation of 982 companies and 828 close corporations during the first 11 months of 2021. This added to a total of 2,035 liquidations in 2020. The closure of companies (due to the pandemic, load-shedding and other factors) and scaling down of activities by others have had a big negative impact on South Africa’s employment over the past two years. Furthermore, following the week-long unrest in July 2021, and the adverse impact that this had on economic activity and physical infrastructure, Gauteng and KwaZulu-Natal lost a combined 323,000 jobs during 2021Q3. This contributed to a total loss of 660,000 employment opportunities in the third quarter of 2021. This, in turn, reduced total (formal and informal) employment to 14.28m — similar to levels seen in 2012.

To recap: Data from the Quarterly Labour Force Survey (QLFS) shows that South Africa lost 2.24m jobs during 2020Q2 due to the adverse impact of local and international lockdowns on the domestic economy. As lockdown measures eased, the country recovered 876,000 lost jobs during the second half of 2020, ending the year with 15.02m formal and informal jobs. However, due to a combination of factors, South Africa again lost a net 742,000 jobs during the first three quarters of 2021. As at September 2021, the country had 14.28m employed people. This was just 134,000 jobs (1%) more than seen in the depths of level 5 and 4 lockdown (2020Q2). In short: South Africa has again lost nearly nine out of every ten jobs recovered in 2020H2. This reflects poorly on the employment impact of the country’s Economic Reconstruction and Recovery Plan.

South Africa is experiencing jobless growth. Unsurprisingly, the country now tops the global charts for both aggregate unemployment as well as youth unemployment. 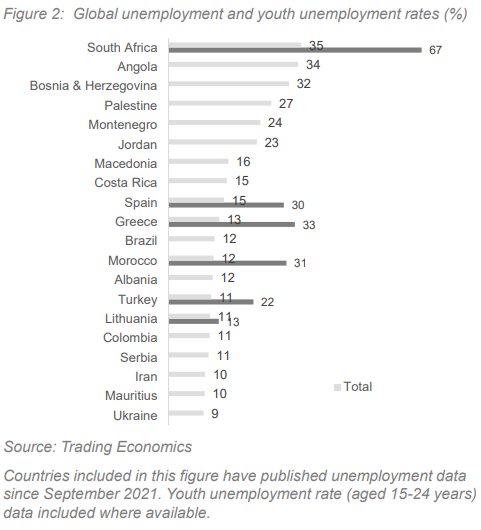 Semi-skilled employment is nearly 19% lower compared to before the COVID-19 pandemic.

Stats SA’s latest QLFS shows that nearly 19% (i.e. almost one out of every five) of semi-skilled jobs that existed before COVID-19 are currently lost. Semi-skilled jobs include the aggregates for sales staff, craft and related trades, clerks, plant and machine operators, as well as skilled agricultural workers. The biggest number of jobs lost (a net 600,000 between 2019Q4 and 2021Q3) is in the category for sales and services. This group includes, among others, jobs like travel attendants, restaurant service workers, shop salespersons and demonstrators. 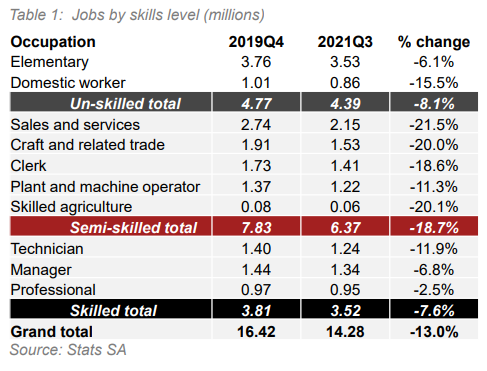 It is understandable how these jobs have declined over the past two years given how COVID-19 — and the July 2021 unrest — has impacted retail and hospitality. For example, Stats SA data shows that inflation-adjusted restaurant sales were nearly 25% below pre-pandemic levels by October 2021. Not surprisingly, employment in sales and services is down 21.5% compared to 2019Q4.

There were 2.7m South Africans working in the informal sector during the third quarter. Informal employment includes workers who are not entitled to, or receive, basic benefits (e.g. pension or medical aid contributions) from their employers and who do not have a written contract of employment. These jobs carry a greater risk of income variability than formal jobs. Even where people have contracted jobs, some are working less than what would be considered full-time. In 2021Q3, there were 846,000 underemployed workers in South Africa, defined as persons who were willing and available to work additional hours but whose actual total time worked was below 35 hours per week.

As reported in our September 2021 edition, the private sector is facing a myriad of local uncertainties that are keeping it from retaining workers or utilising them at 100% of available capacity. Companies build relationships with employees, partners, regulators, and the public on a foundation of trust, and if that foundation is shaken by job cuts, these relationships can risk losing investors and customers – and more talent. While organisations can rarely reduce their people risks (e.g. reducing staff) to zero, many struggle with the speed and nature of response to risks that arise. Stakeholder communication, active change management, and embedding a people-centric approach to workplace culture can help organisations gain clarity around specific aspects of their people risks, including the human resources function, policies, procedures and processes.

For many of those struggling with employment — whether not having a job at all, working in the informal sector, or being underemployed — ‘plan B’ could be to create your own job. However, it is hard being an entrepreneur in South Africa.

With 11.5m unemployed and discouraged adults in South Africa, it would be highly beneficial for the country to have a business environment that is supportive of entrepreneurs. Entrepreneur-ship is the driving force behind the micro-, small- and medium-sized enterprises (MSMEs) that create more than two-thirds of all jobs worldwide. Based on the latest international research findings, South Africa underperforms in creating an environment for entrepreneurship. Its key rankings include:

Unfortunately, South Africa ranks poorly in an EMEA context, with an aggregate score of 33.6 out of 100 placing it in the bottom third of territories. South Africa ranks 32nd out of 35 countries, placing below Croatia and Kenya and ahead of Greece and Nigeria. The accompanying diagram highlights where South Africa is placed based on component scores. 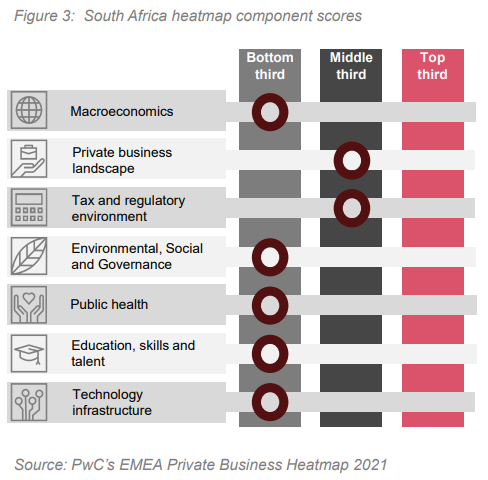 Based on the seven categories included in the heatmap calculations, we highlight some of the challenges to fostering private businesses and entrepreneurship in South Africa. (These lists are far from exhaustive).