Bitcoin vs. Altcoins is a hot topic, and there are several large groups sharing a school of thought and millions of individuals with their own views. This may or may not change your opinion.

However, whether you are a bitcoin maximalist, some other kind of maximalist, swing trader or investor exploring cryptocurrencies, I wrote this with the goal that you would get some valuable knowledge out of this. These data points and conclusions are provided for your usage.

As of this writing, there are now over 20,450 cryptocurrencies listed on CoinMarketCap. Pretty much every school of thought agrees that this is too much, and that over 90% of these projects are failures at best.

Let’s explore some charts courtesy of TradingView. Normally you see charts as a cryptocurrency versus the US Dollar. All of the charts below compare the cryptocurrency against bitcoin.

First off, ETH/BTC . Ether, the native token of the Ethereum network, is the largest altcoin, and it has many proponents insisting that it will “flippen” or overtake bitcoin in market capitalization someday, even someday soon.

It has the following going for it:

Here is what it doesn’t have going for it: 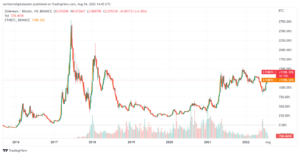 To be clear, this is the price per coin, not market capitalization. That being said, at one time ETH had no limit to the number of coins that could be newly mined. In 2021, Ethereum went through a network upgrade so that it would become disinflationary, with a portion of its supply regularly burned.

This should help its overall token price long-term, but also will mean that it won’t outpace bitcoin by simply mining more coins.

Bitcoin split or “forked” on August 1, 2017, over a disagreement regarding changing its code and working structure. As a result, two blockchains were created from the original chain. Bitcoin “core” as it was called and “Bitcoin Cash” resulted. Roger Ver, Craig Wright and Jihan Wu were some of the leaders of the Bitcoin Cash community at the time.

Bitcoin Cash originally had a lot of support and was a Top 5 cryptocurrency for quite some time. It eventually had its own contentious hard fork in 2018, resulting in Bitcoin SV, led by Craig Wright. 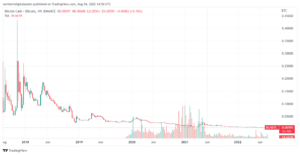 Litecoin is another Proof-of-Work cryptocurrency which has been around since 2014, so we are actually able to somewhat view three bull runs. No major controversies to explain any collapse for Litecoin. 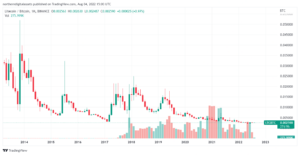 Now let’s explore an even more extreme case, EOS. The token was issued by a company based in Hong Kong called Block.one. It was once a Top 10 cryptocurrency and one of the largest ICOs of 2017.

It appears that their largest accomplishment seems to have been to use their token sale to buy 140,000 bitcoin, currently valued at around $3.2 billion. 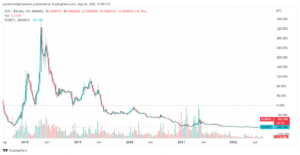 It’s actually very hard to reach this chart, since EOS/BTC is down over 90% since token launch, but you can see a small blip in late May 2021, compared to its initial spike in May 2018.

Here is the chart for the long-term privacy coin, Monero: 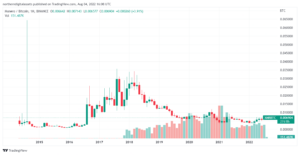 Now let’s take a look at another privacy coin, ZCash, which I believe is the only privacy coin available on a U.S.-regulated crypto exchange (Gemini): 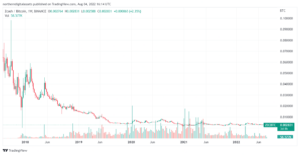 And just to get some variety, let’s look at XRP, which is currently a Top 10 cryptocurrency. 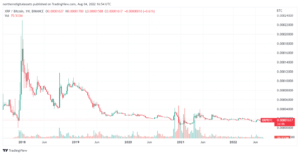 One could argue that the ongoing SEC vs. Ripple lawsuit has affected token price, since XRP was delisted from US exchanges after the start of the lawsuit. That being said, the 2021 bull market peak is about 1/4 of the early 2018 bull market peak.

One is Dogecoin . The long-term altcoin was originally a fork (copy) of Litecoin that Jackson Palmer and Billy and was itself a joke, intended to make fun of crypto.

It has always been popular to traders due to its volatile nature even before the 100x pump of 2021. 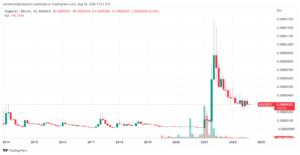 This was part of the meme coin craze of early 2021, following GameStop (NYSE: GME ) and AMC’s pumps, and it was fueled by celebrity support from Elon Musk, Mark Cuban and others. Thus I do not consider this to be a sustainable or predictable trend.

All jokes aside, here is the other outlier I see here.

Binance Coin , BNB, which is tied to one of the world’s two largest and most profitable crypto exchanges, Binance. Binance has built a massive crypto empire and community. Their exchange’s token is possibly the most successful ICO ever. 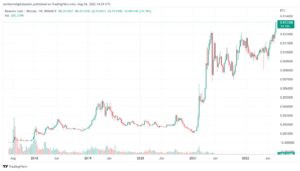 Feel free to drop any actual outliers you find in the comments. Please don’t shill or I will block you immediately.

From this it could be surmised, that these are the rule, with few exceptions:

This article was originally published on the The Latest Block.