Watching the price of Bitcoin can be dizzying. In 2021, the crytpocurrency rose to a record high at $65,520 on Apr. 14 as Coinbase Global (NASDAQ: COIN ), the crypto exchange, went public on the NASDAQ .

Bitcoin has had a habit of reaching new peaks on occasions that raise its stature as a mainstream asset. The first parabolic move came in late 2017 when the CME listed Bitcoin futures contracts for the first time. The COIN listing was another major event in Bitcoin’s short history.

Almost everyone has an opinion on Bitcoin and cryptocurrencies. Elon Musk, the founder and CEO of Tesla (NASDAQ: TSLA ) and SpaceX, has embraced the asset class. His tweets have caused buying and selling in the cryptos he follows. And his companies have purchased cryptos over the past year.

On the other hand, Warren Buffett, the CEO of Berkshire Hathaway (NYSE: BRKa ), often called the "Oracle of Omaha and considered the greatest value investor of our time, has called Bitcoin “financial rat poison squared.” His partner, Charlie Munger, said Bitcoin is “disgusting and “contrary to interests of civilization.”

Jamie Dimon, the CEO of the leading US bank, JP Morgan Chase (NYSE: JPM ), has not been a fan of the cryptos either. Last week, a former Chase executive, now cryptocurrency entrepreneur, proposed a wager pitting JP Morgan shares against Bitcoin with $10 million on the line.

A few short years ago, in December 2019, Jamie Dimon called Bitcoin a “fraud.” He said:

“It’s worse than tulip bulbs. It won’t end well. Someone is going to get killed. It’s just not a real thing, eventually it will be closed.”

Last week, Dimon doubled down on his view, saying:

“I personally think Bitcoin is worthless, but I don’t want to be a spokesperson. I don’t care, it makes no difference to me. I don’t think people should smoke cigarettes. Our clients are adults, they disagree. That’s what makes markets. If they want access to buy and sell Bitcoin…we can give them legitimate, clean-as-possible access.”

One of many opponents; Lots of cautionary messages

The Oracle of Omaha and his sidekick Charlie Munger have not wavered in their distaste for cryptocurrencies. The most recent warning came from hedge fund manager Ray Dalio, who cautioned if Bitcoin becomes really successful, regulators will “kill it.”

The billionaire and founder of the world’s largest hedge fund, Bridgewater Associates, was pretty adamant when he said:

Regulators are taking a closer look at regulating cryptocurrencies but have sent mixed messages. In early October, SEC Chairman Gary Gensler told Congress he wants crypto platforms to register with the SEC to “protect the public.”

He also has signaled support for a futures-based bitcoin ETF product. The futures-based ETF, to be called the ProShares Bitcoin Strategy Fund and scheduled to trade under the ticker BITO, is likely to begin trading this week.

However, the head US regulator has not been consistent. While saying the US will not ban crypto like China, he noted cryptos remind him of wildcat banking in the US from 1837-1863 and does not see cryptocurrencies lasting long.

Jack Dorsey, Elon Musk, and many others disagree.

Daniel Masters was a successful oil trader at JP Morgan and Phibro Energy. He ran a hedge fund, Global Advisors before he was bitten by the crypto bug. I worked with Danny at Phibro and for a brief period before 9/11 at Global Advisors. I have a lot of respect for him and his visionary transformation into the cryptocurrency arena.

Danny is the Executive Chairman of CoinShares, a pioneer in digital asset investing. Danny worked under Jamie Dimon when he ran JP Morgan’s oil trading business.

Last week, on Oct. 11, Danny responded to Mr. Dimon’s latest comments with a message on LinkedIn:

Danny’s challenge reminds me of when bond trader John Meriwether and his boss Salomon Brothers’ chief John Gutfreund tried to engage in a $1 million liar’s poker hand during the 1980s.

“One hand, one million, no tears.”

The price action says it all

Opinions are like, well, you know...everyone has one. Nevertheless, markets settle all disputes; they are the ultimate judge of fair value. An asset’s price is always the correct price because it is the level that buyers are willing to pay, and sellers are willing to sell in a transparent environment, the marketplace.

Trends in markets reflect sentiment, which is the primary force determining if a price moves higher or lower. Bitcoin and many other cryptocurrencies may have many opponents, but it is hard to argue with the price trend over the past eleven years. 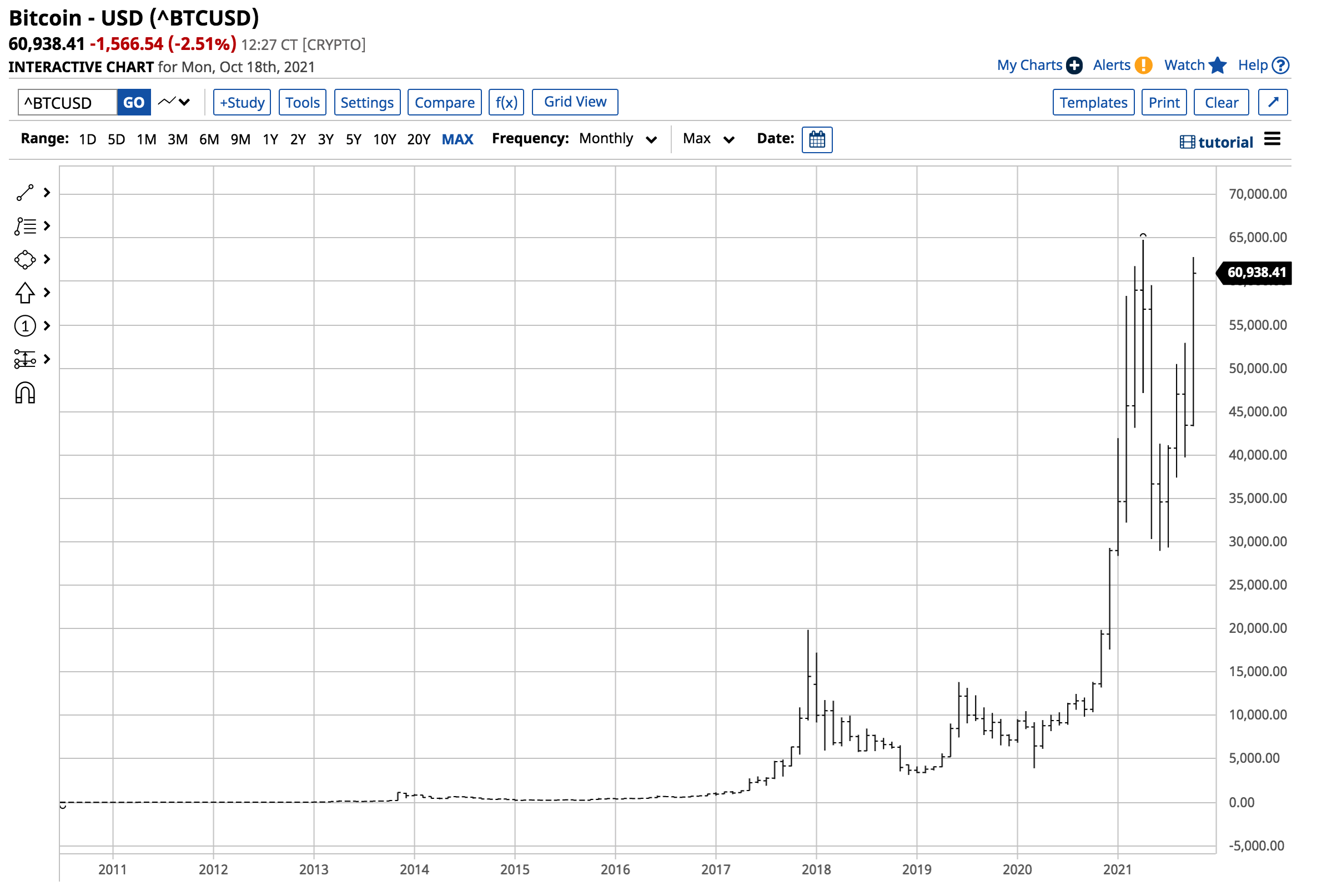 The price action needs no explanation; Bitcoin is a bull.

In 2004, James Surowiecki’s book The Wisdom of Crowds argued that the many are smarter than the few and noted how collective wisdom shapes business, economies, societies, and nations. Bitcoin’s ascent is the embodiment of Surowiecki’s work.

Many “experts” may hate Bitcoin and the 12,800 cryptos, but the crowd does not.

Money is an emotional subject for most people. For governments, it is the root of control.

The money supply is a critical tool for maintaining power. China banned cryptocurrencies because it is an autocratic government. In the US and Europe, doing that is not so easy as the basis of democracy is that individuals have the authority to choose the officials that determine policy.

Treasury officials, central bankers, and elected leaders in the US face a conundrum. The status quo allows them to control the money supply. Cryptocurrencies challenge that control, returning the power of money to the collective wisdom of individuals.

Janet Yellen, the US Treasury Secretary, and Christine Lagarde, the European Central Bank President, have expressed concerns over the nefarious uses of cryptos in ransomware and other illegal activities. However, the underlying concern is their control of the money supply and the resulting power.

The most recent comments supporting the status quo came from Threadneedle Street, the home of the Bank of England. Jon Cunliffe, deputy financial stability officer for the UK’s central bank, said about crypto that it “poses a rapidly growing threat to the global economy.” He also said:

“Regulators internationally and in many jurisdictions have begun the work. It needs to be pursued as a matter of urgency.”

Mr. Cunliffe is concerned that “A massive collapse in cryptoasset prices, similar to what we have seen in tech stocks and subprime, is certainly a plausible scenario.” He added:

“The bulk of these assets have no intrinsic value and are vulnerable to major price corrections.”

When will government officials come clean and express their underlying fears that cryptos remove one of the most potent governing tools, controlling the money supply?

I'd wager that Jamie Dimon ignores Danny Master’s proposed bet. The trend is always your friend, and Jamie Dimon is smart enough to know that betting against Bitcoin is going against the crowd’s wisdom.