US markets were little changed yesterday, after another quiet trading session. The old-school Dow Jones industrial index inched higher, while both the broader S&P 500 and the tech-heavy Nasdaq finished the session flat. That sounds fine to us, because days like these expose stock bargains and build confidence. Let's see if we can limp into the 4th of July long-weekend in one piece.

For the record, the S&P 500 is down close to 20% this year, putting it on pace for the worst first half in five decades. Note that a bad first half doesn't guarantee a bad second half. In 1970, the S&P 500 fell 21% in the first six months and then gained 27% in the second, ending the year roughly flat. We're still optimistic!

In company news, the board of Walt Disney (NYSE: DIS ) voted unanimously to renew Chief Executive Bob Chapek's contract for another three years. Chapek has helped the company navigate through Covid and seen it gain over 200 million subscribers in its Disney+ offering. Elsewhere, meme stonk Bed Bath & Beyond fell 24% after the retailer posted bigger quarterly losses than expected by the street.

Last weekend I engaged in some email banter with an anonymous subscriber to our daily newsletter who calls himself Mystical Magicmail.

He was berating me for saying that clients should ignore the sell-off and just stay long and strong. As you know, our strategy is to hold on to shares of quality companies, even when they go down a lot, and wait for the recovery. It takes a great deal of hand-wringing for us to sell a portfolio stock. It happens, but not very often, at all.

Of course, his idea that one can tell in advance when a bear market is about to start, is dead wrong. It's never clear what will happen tomorrow, next week, or next month. The market was up 6% last week. No one saw that coming either.

I pointed out that if you always sell at the bottom of any downturn, you miss the recoveries and have terrible long-term returns. It's even worse if you sell after small downward moves. People like that never want to buy back in.

Anyway, the chart below demonstrates my point. It's from Morningstar, and it shows the US market's steady climb since 1870, with the "crash episodes" in red. Basically, you just have to stay put and wait. Jumping around based on some half-baked "sell rules" is silly. 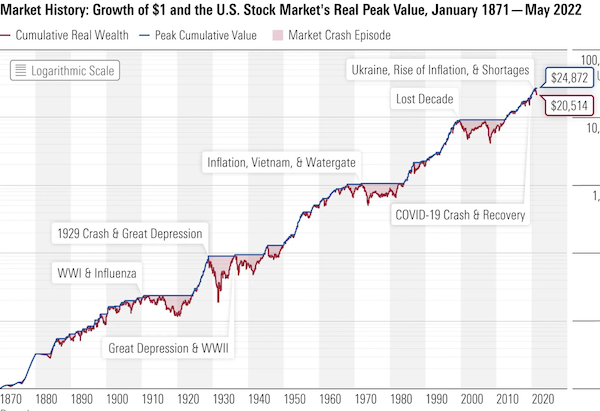 PayPal (NASDAQ: PYPL ) has had a horrible six months, to say the least. The company was one of the "lockdown darlings", tripling in market value from March 2020 to August 2021. Unfortunately, lockdowns created an unnatural surge in demand that many companies could not handle. PayPal opened too many accounts in a short space of time and a lot of those accounts turned out to be once-off users, trying to take advantage of promotions. The share price is now back down where it was in 2017. That's crazy.

The difference between PayPal and many other pie-in-the-sky tech businesses, that have also been crushed, is that PayPal is a large, established business with a massive customer base, real profits, and solid cash flows. Life has carried on and the business continues to innovate.

More recently, they launched a new credit card for their merchant clients. The card has great cash-back incentives for small businesses that use PayPal to handle their payment systems. There are two sides to every transaction and keeping PayPal's merchants happy is crucial.

This may sound a lot like what banks do, but that is what I like about PayPal. They can offer retail banking services that are 100% digital with no branches, no tellers, and lower fees. As Paul says above, we will hold and wait for the share price recovery.

Recent data on central London office rentals shows a record number of new tenants. Between Covid and Brexit, central London has had a tough time recently. The data shows that the new tenants are a mix of startups and companies relocating from outside London.

Surprisingly, the average cost per square foot is now at a record high. I had assumed that lower rental rates attracted companies to move into the city. It would seem that the best properties to own are the premium-grade ones. There is a supply limit, so there will always be good demand for the best.

The first generation iPhone went on sale on the 29th of June 2007. At the time some Steve Jobs haters said it was all just hype, but people lined up outside Apple (NASDAQ: AAPL ) Stores to get their hands on this new, ground-breaking device.

That was 15 years ago. Despite the rave reviews back then, it was hard to predict how huge the impact of the iPhone would be, on the smartphone market, people's lives and Apple's business.

The iPhone has easily become the most successful product in modern history. Since its inception, the iPhone has racked up over $1.5 trillion in sales, almost single-handedly making Apple the most profitable and valuable company of all-time. Yes, a GOAT!

This quick video shows how iPhone sales compare to the total sales of large multinationals going back to 2007. The iPhone is bigger than companies like Microsoft (NASDAQ: MSFT ), General Motors (NYSE: GM ), and JP Morgan. What's even more impressive is that the iPhone is bigger than Disney, Nike (NYSE: NKE ), Coca-Cola (NYSE: KO ), and McDonald's (NYSE: MCD ) combined. No wonder it's hard to replicate this kind of success! 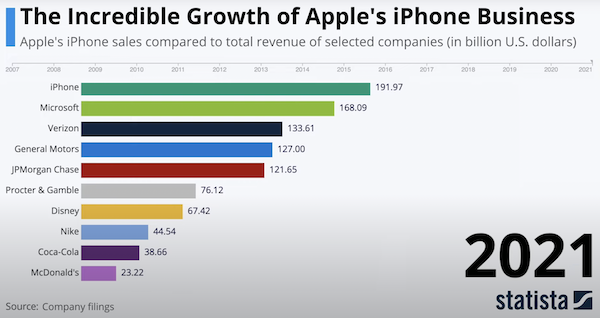 Asian markets are mixed this morning. Stocks fell in Japan but rose in mainland China . Hong Kong is down a bit. Asian currencies rebounded after Chinese services sector data showed a strong pickup after Covid outbreaks and restrictions were eased.

US equity futures are down, for now. This is the end-of-quarter trading day, which sometimes leads to market volatility as big institutions do some portfolio rebalancing. We shall see.

You made it as far as Thursday, the weekend is in sight.