The Bitcoin meltdown that took on speed this weekend continues today. The selloff of the digital currency has now taken the token below the psychological round $50,000 threshold, a level beneath which it fell on Saturday.

With the price of the cryptocurrency down by more than 3% on Monday, hovering around $48,000, it's clear the move is more than just thin trading because of lower volume on the weekend.

Indeed, there are no known fundamental drivers for this current selloff which came just after the market narrative seemed to focus single-mindedly on whether the number one cryptocurrency by market cap was headed to $100,000.

For anyone searching for some sort of fundamental trigger, it seems investors generally dumped Bitcoin after the news about the Omicron variant roiled markets. But the knee-jerk selloff continued after the initial headlines, demonstrating yet again that Bitcoin is no safe haven and certainly not a store of value.

The token is approaching a 30% decline in just a little over a month, since its record peak in November, putting Bitcoin deep within a bear market. 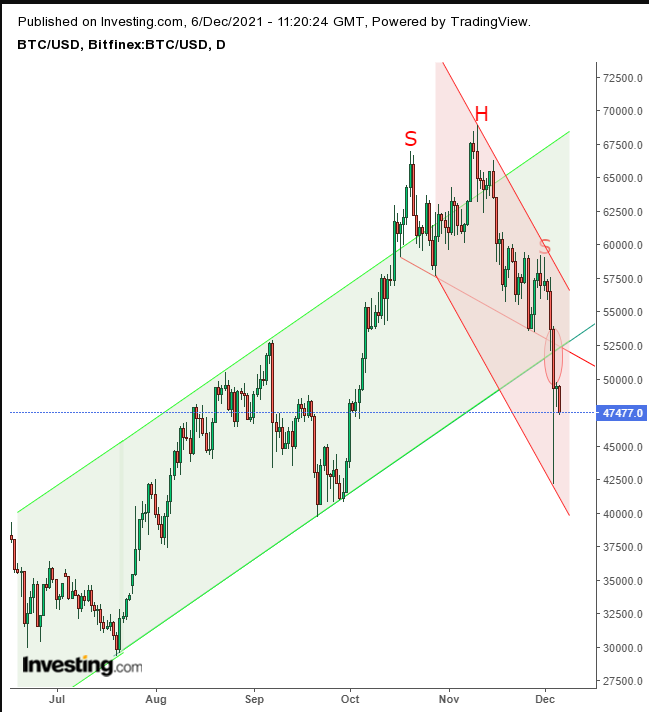 The price extends the neckline penetration of a downsloping H&S top, one where bulls were so weak they couldn't muster a proper right shoulder. Note that the downside breakout of the pattern coincided with a cross below the bottom of a rising channel, possibly the beginning of a falling channel.

The bigger picture is perhaps even bleaker. 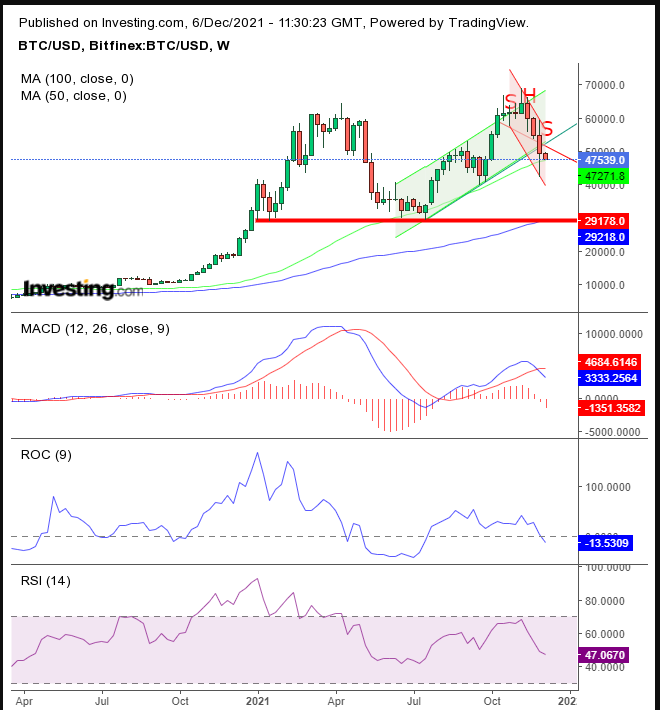 On the weekly chart it looks like the H&S top may be the right top of a much larger double-top in the broader view.

While the 50 WMA provides support, for now, the 100 WMA teams up with the potential neckline for the most extensive pattern Bitcoin has yet to see, which would follow the first extended selloff of the token, that's now lasted three straight weeks, since 2018.

The MACD, a price-based indicator, and the momentum-driven gauges, the ROC and RSI, provided negative divergences when the record price peak in November occurred but was left on its own, having no support from momentum amid weakening relative pricing.

Conservative traders should wait for the price to rebound in order to retest the daily H&S neckline and top of the (red) falling channel.

Moderate traders would sell a rally around the critical $50K level near the neckline.

Aggressive traders could buy the dip, before joining the rest of the market with the selloff, provided they are risking money they are willing to lose. A tight trading plan is essential. Here's an example: