After investors celebrated Friday's better-than-expected jobs report , chickens have come home to roost. Traders are beginning to accept that the Fed may sincerely wish to ease its aggressive tightening but cannot find the means to go through with it at the moment.

It's worse. China is finally easing restrictions, and the market can't even pick up on that as the sudden (recurring) realization that too much of a good thing is, in fact, a bad thing. The overheating employment market exacerbates inflation , eroding the dollar 's buying power and forcing the US central bank to keep raising rates to slow the economy, literally.

Consumer Discretionary, via XLY , was Monday's second worst-performing sector in the S&P 500 Index , losing 2.88%—almost as much as Energy, via XLE , which dropped 2.97%.

The more the Fed raises interest rates, the more likely the economy will fall into a definitive recession following the year's first two quarters' technical recession. The demand for energy falls when business slows, as manufacturing, shipping, and travel take a hit. Travel also overlaps with consumer discretionary stocks, the focus of this post.

As the sector's name implies, demand for these companies' goods and services is at the consumers' discretion. Therefore, when times get tough, consumers cut back on these nonessential spending so that they have enough money for what they can't do without, listed on Consumer Staples ( XLP ). 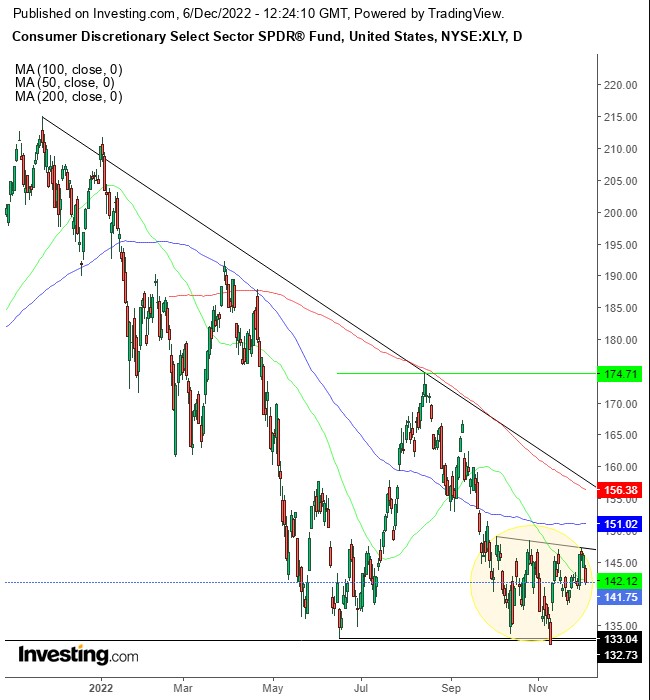 Here, we can see the faceoff between bulls relying on the economic strength continuing. The bottom developing since Oct (yellow) is facing off the downtrend line - reinforced by the 200 DMA - since the Nov 22 all-time high. If the H&S bottom wins, it will run for an ever larger double-bottom if it scales above the $175 level peak (green line), but I don't think so. Let's look at the following chart. 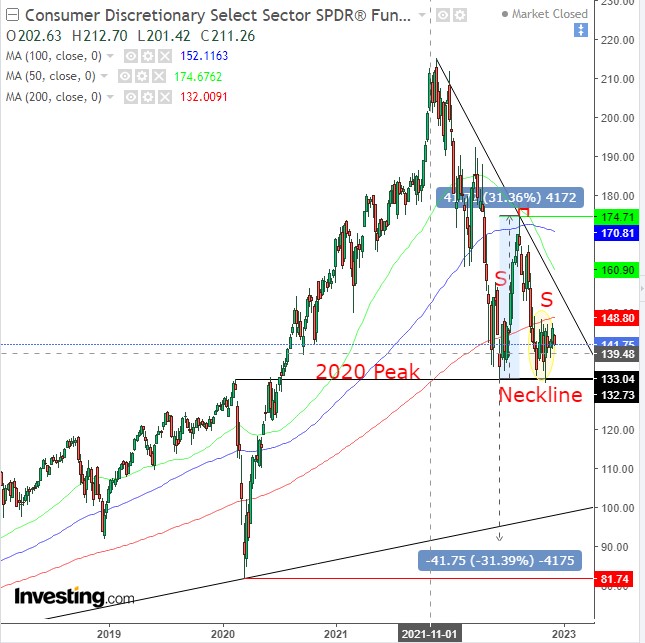 The price action since May developed a much larger H&S Continuation pattern. The market balance attempted to flip. When it fails, traders will reverse positions and extend the downtrend. We can see that the 2020 peak became a bullish stronghold after buyers absorbed all the available supply and sellers switched sides. Investors remember the 80% surge between Jul 2020 and Nov 2021, and that memory drove them to attempt to repeat that move.

The continuation pattern's height is $41, which is the expected move upon a downside breakout below $133 as the support flips to resistance, the same as when the 2020 resistance converted to support. However, the rising trendline since the infamous Apr 2009 bottom is already $100. Will a chain reaction decrease the price to $133 - $41 = 92? I wouldn't be surprised. The next significant support is in the low 80s, the Mar 2020 notorious bottom.

Conservative traders should wait for the continuation pattern's completion, with a close below $130 and a three-day period during which the price remains below the pattern, to weed out a bear trap, followed by a return move that reasserts the neckline's resistance.

Moderate traders would wait for a penetration below the $130 level and a two-day filter, followed by a return move for a better entry.

Aggressive traders could short according to their strategy. Here is a generic example: