After the US Federal Reserve's monthly policy decision on Wednesday, the dollar fell to a three-week low. The USD selloff extended into Thursday, for a fourth day of declines, for the first time since Dec. 4, 2020.

During yesterday's FOMC press conference , Fed Chairman Jerome Powell reiterated, yet again, that higher rates won't be forthcoming any time soon.  According to Powell, "we have some ground to cover on the labor market side," before the bank will start tapering its asset purchases, a more subtle form of tightening than raising interest rates.

Does this mean the dollar will now head higher? The technicals are unclear. 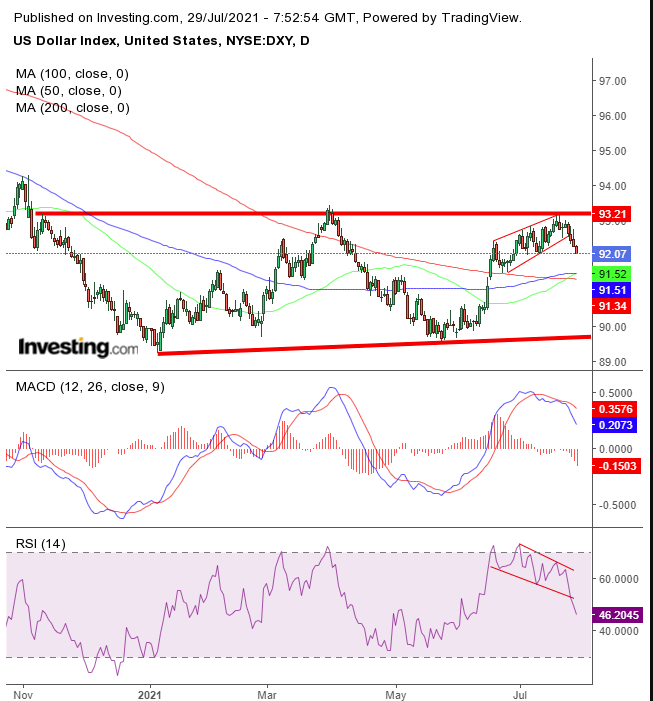 The dollar selloff upended a suspicious-looking, short-term rising channel which we've been uncomfortable with because the rising trading boundary followed a spike in the USD. Such a range, after a preceding surge, is reminiscent of a rising wedge, bearish as disappointed bulls who had hoped for a continued spike are left with a tempered incline that's now too slow for their taste. So they sell off.

However, the price didn’t form a decisive wedge, one in which the lower boundary rises noticeably more sharply than the upper bound—which would demonstrate exponential buying, outpacing the steadier selling. That zealous buying, which didn't fully play out, sets up the disappointment we just described.

Still, the MACDs short MA drooped below that of the long one, retested, then fell again. That provides evicence of weakening recent pricing, smoothed out by averages.

Most telling though, the disguised rising wedge developed below the Mar. 31 high, which itself found resistance by the November highs. Connecting the highs forms the neckline for a potential double-bottom, or alternatively for an ascending triangle, as the second bottom. formed in May, is slightly higher than the Jan. 6 bottom.

Either way, both formations encompass the same dynamics, rendering the difference academic. As a point of interest, the last time the US currency fell for four straight days it occurred a month into the patten, forming the first leg lower.

The 50 DMA just crossed above the 200 DMA, triggering a Golden Cross, indicating that smoothed recent pricing is strengthening relative to longer-term, averaged-out pricing. Also, the 50 DMA just peaked above the 100 DMA, creating a bullish formation since each shorter moving average is higher than the longer one. This signals a wide spectrum of improving prices.

Though this could be exciting, remember these are “moving" averages—their strength lies in their movement. They call attention to one trend overcoming another.

However, these moving averages have been tracking a price that has been going sideways since November. Would that render them useless? We’re not sure.

The 200 DMA just fell into the pattern midway, and this is the first time the 50 or 100 DMAs have crossed the 200 DMA. Thus, we think that does give the signal validity though we’ll assign it a lower weight in our preponderance of evidence, following the extended sideways, trendless price movement.

Conservative traders should wait for the price to either return to the bottom of the channel or break out above the top to demonstrate accumulation, before considering a trade.

Moderate traders would risk a short if the price returns to the broken rising range and finds resistance.

Aggressive traders could short at will, if they expect the greenback to return toward the bottom of the large pattern since November, as long as they accept the likelihood of whipsaws. Money management is key. Here’s an example: