The first-half 2022 saw risk assets get battered, and as we now start the second half of the year, the outlook remains bleak.

While bargain hunting and short-covering might see the indices bounce back a little here and there, the risks still remain skewed to the downside. Rising interest rates, falling consumer, business, and investor confidence amid soaring inflation mean a recession is looming.

This of course means the end of rate hikes might come sooner, but until inflation starts to fall noticeably, don’t expect investors to pile back into equities. As such, more pain rather than gain is the most likely outcome for US and global stock indices.

Indeed, the Dow Jones has broken its short-term bear trend line, which has dashed bullish hopes that the rally we saw from the middle of June marked the low for the year. Tuesday’s large bearish engulfing candle suggests the bears remain well and truly in control. 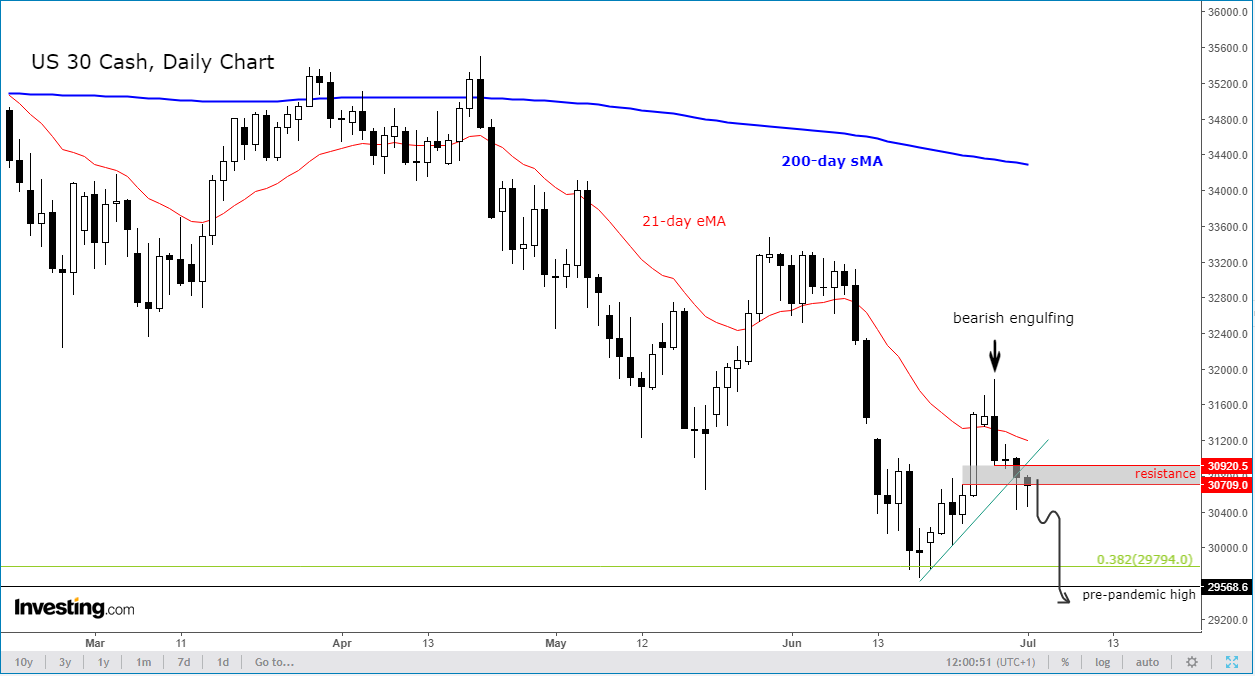 With the Dow also taking out support in the 30,710-30,920 zone, this has further increased the risk of a continuation lower. Unless the above area is reclaimed pretty quickly on a daily closing basis, I would imagine a fresh low on the year is on the cards.

The next big downside target is at 29,570-ish—the high that was made pre-pandemic. Once a major resistance, there is a possibility that this level might turn into a major support level. But we will assess the likelihood for a market bottom if and when we get there.

For now, the most important thing to remember is that all the key technical indicators such as moving averages, price action (lower highs), and fundamentals point to lower index levels. As a trader, I would concentrate on selling into the rallies rather than trying to pick the bottom.

Picking the bottom in an environment of rising interest rates, inflation, and slowing economic activity is very risky, in my view. But if buying the dips is your style of trading, then ensure you book quick profits on any bounces, until such a time that the market has formed a clear bottom signal.