A bit more than two weeks ago, European Central Bank President Christine Lagarde insisted, "the lady is not for tapering." It was the ECB chief's attempt at easing trader nerves. In plain language, in an effort to keep regional markets stable and not harm the euro , Lagarde was simply saying, 'don’t worry, I will keep giving you free money, and to the same extent.'

But the ECB is starting to lag peer central banks which have begun to at least eye the path of tightening if not to have already started the process. The US Fed has already indicated it may trim its bond buying program this year and raise rates in 2022. The Bank of England could start increasing interest rates as early as this year.

In addition, at least 5 other central banks around the world have indicated they might begin hiking interest rates this year while Norway's Norges Bank has already done so. So how long can the ECB remain behind on fiscal policy? And how would it affect the single currency if the eurozone's central bank delays tightening?

With these questions in mind, investors are likely to pay close attention to what Lagarde says this week when she speaks today , again tomorrow and on Wednesday. Given the 'renegade' status the ECB is developing within the central bank cohort, Lagarde’s words could potentially move FX markets, if it affects the single currency. 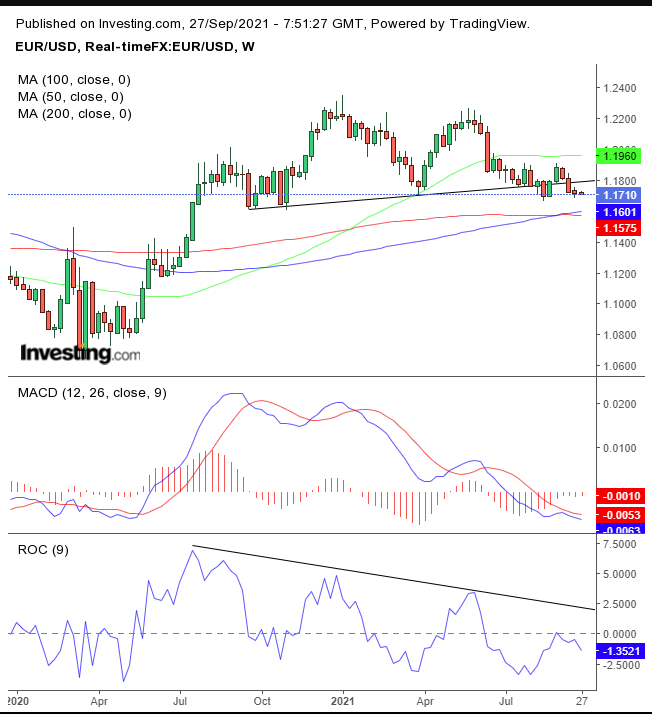 The EUR/USD pair completed a 12-month H&S top, in play since September 2020. The Moving Average Convergence Divergence has been providing a negative divergence. That’s when this indicator comes into its own. The Rate of Change shows that so did momentum.

The price crossed below the 50-week MA, before it slipped below the neckline of the H&S top.

Here's what that looks like via a closer view: 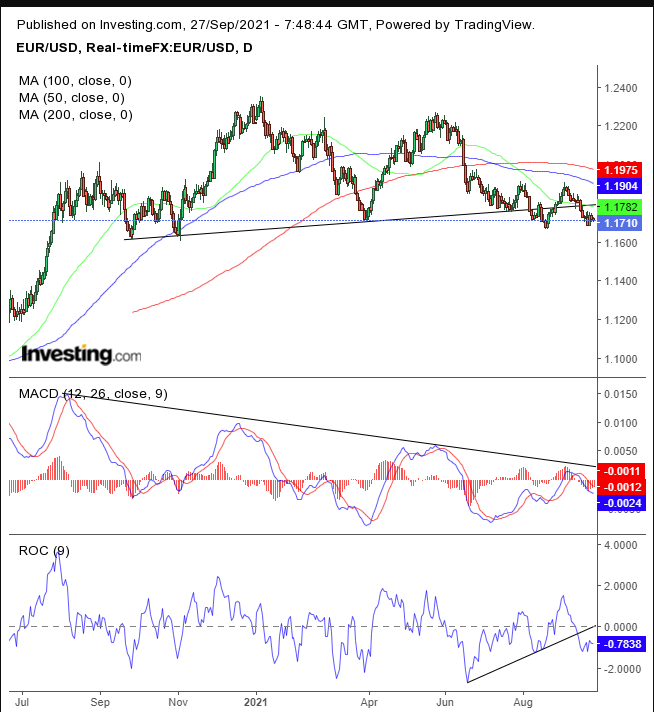 On the daily chart it's clear the moving averages entered a bearish formation, with the faster ones falling below the slower ones, demonstrating current weakness in pricing.

Also, in this time-frame, the MACD has been providing a negative divergence. It also provided a short-term sell signal, when the short MA crossed below the long MA a couple of weeks ago. The Rate of Change also provided a bearish cross.

Finally, we'll use the hourly chart to focus in on potential short-term moves. 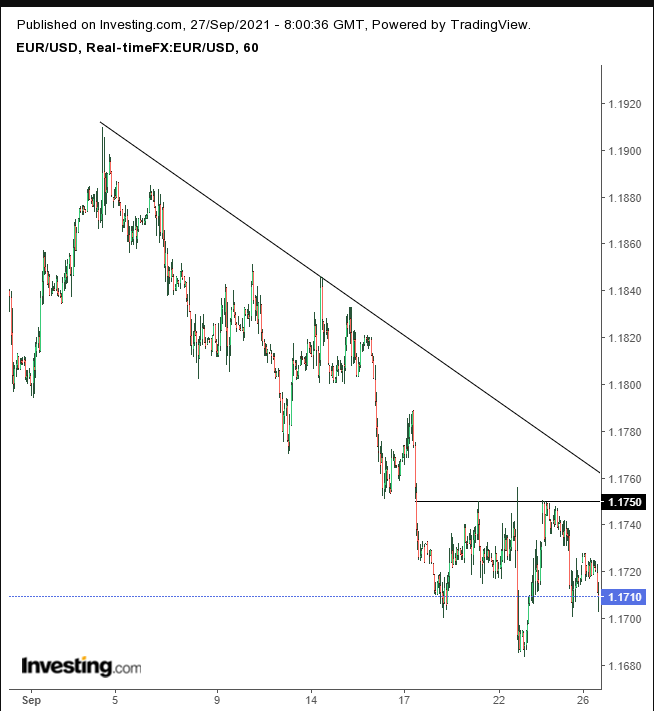 In the short time frame, the euro could rebound, if it completes the H&S bottom. As of 4:00AM EDT, the price has been fluctuating, forming a high-wave candle, as the single currency nears the bottom of its right shoulder.

This increases the likelihood of a short-term upward reversal, toward the neckline of the hourly H&S bottom.

Conservative traders should wait for the price to close below 1.1600, in order to clear the August low, whose neckline penetration of the year-long H&S top proved to be a bear trap. Then, they should wait for a return move that retests the pattern’s integrity.

Moderate traders would also wait for the same filter, perhaps as well as a corrective rally, for a better entry, if not for further confirmation.

Aggressive traders could enter a contrarian, long position, counting on dip-buying as Lagarde does her verbal dance and says something that could be construed as hawkish. That scenario would correspond with the hourly chart.