The EUR/USD is likely to pause for breather or even reverse after an impressive two-day recovery as rates tested a key resistance zone at the time of writing. Traders were wondering what the double-digit inflation prints for Germany and Eurozone meant in as far as the ECB is concerned.

Investors are also not so keen to sell the dollar aggressively just yet, as the Fed’s hawkish rhetoric continues. Core PCE price index is up next, which could move the dollar sharply.

Before discussing the macro factors that could limit the EUR/USD's rise, let's take a look at the daily chart of the EUR/USD as it tests a key resistance zone: 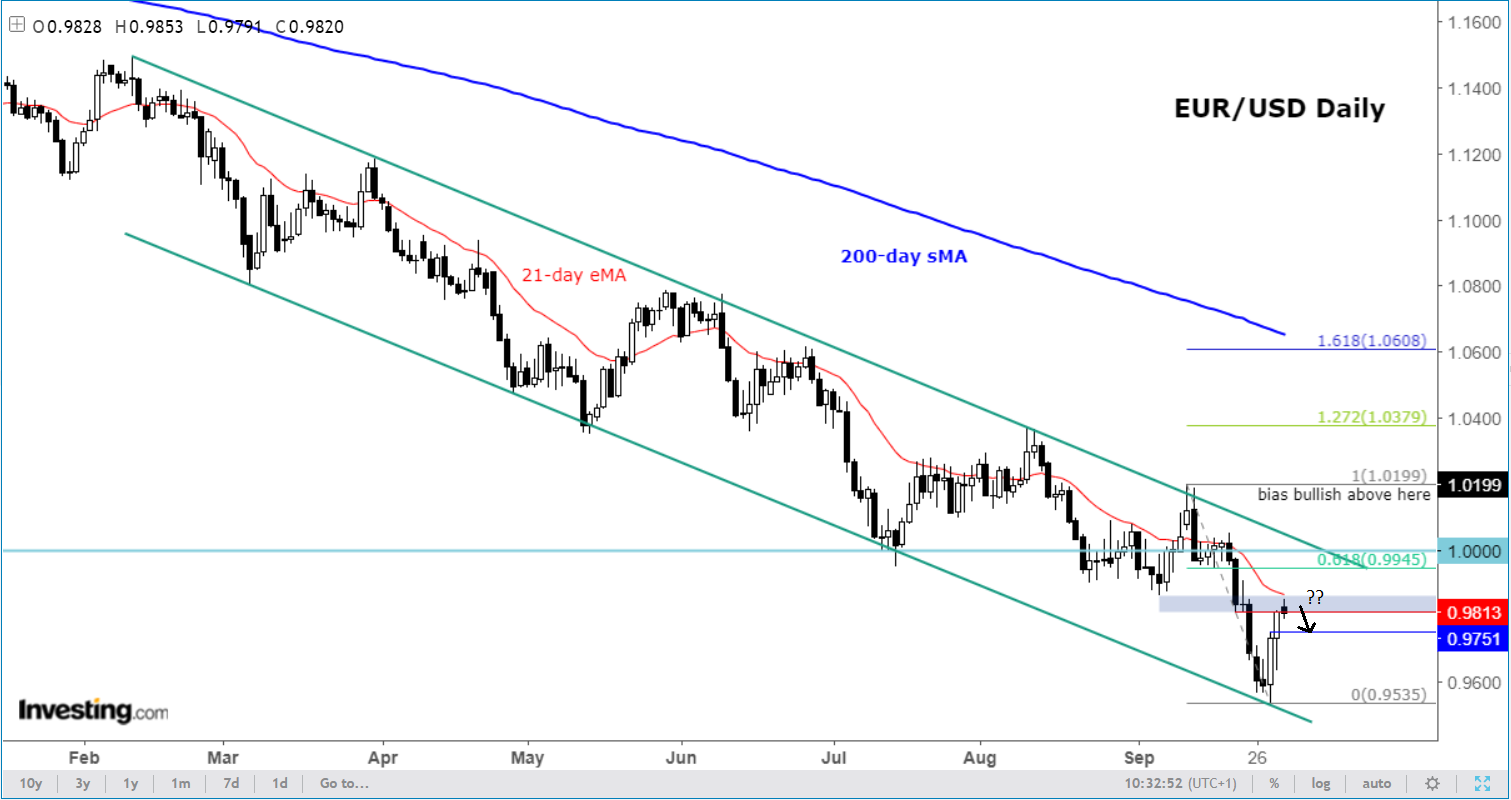 As can be seen, the area starting around 0.9810 was the base of the previous breakdown. At least a small retreat from there should not come as surprise now, with the next short-term support seen around 0.9750ish. If the euro gets to 0.9750 and doesn't bounce, then the bulls will be in a spot of bother as we may then see a return to the lows again.

Conversely, if the euro manages to find unexpected support and break 0.9810 on a daily closing basis, then the next bullish objective would be the top of the bearish channel around 1.0000. Only a clean breakout above this bear channel will invalidate the larger bearish technical outlook, as things stand.

Now, with both German and Eurozone CPI jumping to 10% on a year-over-year basis, you would think the ECB will have to pursue with even more aggressive rate hikes now, which in theory should be positive for the euro. But with the energy crisis being a major source of concern and stagflation so profound in Eurozone, there is the danger of exacerbating the recession if the ECB were to go on a very aggressive hiking cycle.

Still, they can't afford not to act. Inflation must come down, and fast. What they don’t want is a repeat of what happened in the UK, with borrowing costs soaring and pound tumbling. Any further weakness in the euro will translate into even more imported inflation, ceteris paribus. The ECB might have to intervene like the Bank of England did by buying long-dated bonds, or the Japanese government did by trying to prop up their currency by selling some of its dollar reserves.

While the ECB will slowly close the gap on the Fed, which should see the EUR/USD stabilize if not rise back above parity in the not-too-distant future, the ongoing macro risks regarding stagflation and energy crisis argue against a strong euro performance.

Meanwhile, Fed speakers this week continued with their hawkish rhetoric as they are keen to create a soft landing in the US economy to help bring inflation under control. Against this backdrop, I don't expect to see a major recovery in the single currency just yet.