Earlier this month, after US President Joseph Biden indicated he was reviewing the rollback of Trump-era China tariffs, market sentiment flipped back to risk-on, at least intermittently. Investors rotated out of safe havens such as the dollar, and into equities.

Monday morning, during a joint press conference in Tokyo with Japan's Prime Minister Fumio Kishida, President Biden reiterated he was still considering cutting tariffs on Chinese goods, boosting risk appetite yet again. As well today, European Central Bank President Christine Lagarde said the ECB was, "likely to be in a position to exit negative interest rates by the end of the third quarter."

The announcement lifted the euro , which makes up 57.6% of the basket of currencies in the US Dollar Index , pressuring the greenback yet further. Increased demand for the euro also means a higher supply of dollars, additionally weighing on the USD.

Technically, too, the global reserve currency is looking at a deeper correction within the primary trend, which remains up. However, that doesn't mean traders can't continue to trade within the dip—either in sync with the primary uptrend or by shorting the slumps—according to their preference. 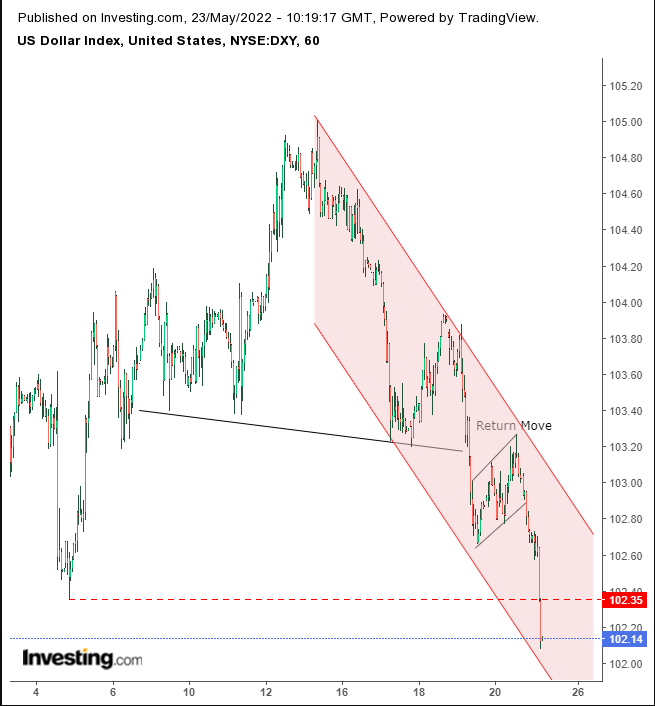 The dollar just completed an hourly H&S top, followed by a Rising Flag, bearish after the initial plunge.

The flag's implied target is measured by its flagpole and the sharp fall that preceded it. Given that the same trading interests are expected to remain involved, the minimum target is a repeat move, aiming at 101.70.

The H&S's implied target is determined by measuring its shortest part, from the top of its head to the left shoulder—which is aiming at 101.60

With two different patterns providing the same approximate target, it suggests considerable interest in this price area, bolstering the analysis as legitimate.

For interested traders, this pattern enables a few approaches.

Conservative traders should wait for the greenback to make a new daily high, extending the primary uptrend or registering a series of descending peaks and troughs, reversing the trend, before committing to a trade.

Moderate traders would wait for the USD to bounce and retest the flag or channel top, with evidence of distribution, before risking a short.

Aggressive traders could risk a long position, counting on the rebound from the channel bottom, before joining moderate traders with a short at the top of the Rising Channel until the dollar syncs up with its primary uptrend.

Author's Note: Strategic trading is "luck management," as the trader behaves in a manner that increases their odds of joining statistics on which these patterns are based. Operating according to a plan that meshes with your timing, budget, and risk temperament will boost your chances of success. Until you learn to do so, use our samples for practice, though not necessarily for profit. If you don't learn and understand the basic mechanics of trading, you'll end up with neither success nor profits. That's guaranteed and no money back.