The pounding for sterling continued when Asian markets opened after it plunged by nearly 5% to a record low against the US dollar. The downbeat currency then surged back off its lows as traders priced in the prospects of a big rate hike from the Bank of England , possibly in an unscheduled meeting. At the time of writing, the GBP/USD was still highly volatile, but this is not necessarily a bad thing if you are a short-term day trader as it will offer plenty of tradable opportunities.

We will discuss a couple of tactical trade ideas shortly, but first let’s remind ourselves why GBP/USD has been beaten to the ground. There are two parts to it, first the weakness of the pound, but also the strength of the US dollar (as not all GBP pairs are at record or multi-decade lows).

After last week’s mini-budget and a smaller-than-expected rate hike by the Bank of England, despite a double-digit inflation rate (which is likely to accelerate further, given the renewed falls in the pound), investors are really concerned about the mismanagement of UK economy under the new Tory government. Specifically, they are worried that new Chancellor of the Exchequer’s fiscal policies of big tax cuts and the new energy bill will send an already soaring inflation and government debt even higher. These concerns are reflected in UK borrowing costs—or government bond yields—jumping sharply higher in the last few days.

Given the magnitude of the pound’s declines, traders are now concerned that the government might announce a Japan-style intervention, or the Bank of England (BoE) might step in with a big rate hike, possibly in an unscheduled meeting. Money markets have priced in 175 basis point of BoE rate hikes by November!

So, volatility is likely to remain elevated for a while yet. Let’s discuss the bullish and bearish cases for short-term traders, after the cable’s big drop and an equally impressive recovery from its overnight lows. 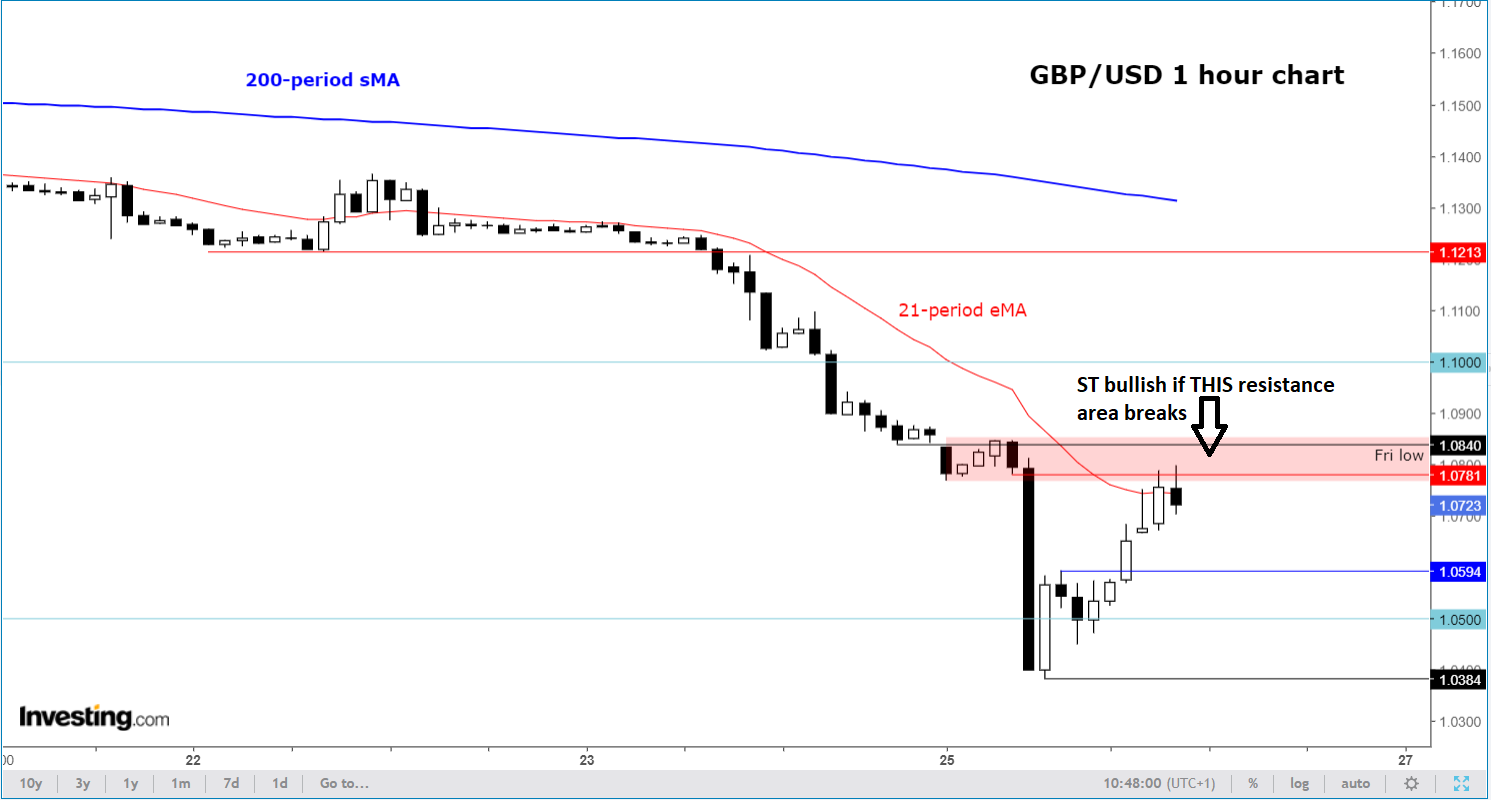 After suffering a mini flash crash at the Asian open, the GBP/USD as able to make back more than 450 pips (~4.4%) off its lows by mid-morning London time. But at the time of writing, it was starting to weaken again as it tested the 1.08 handle. This area was the base of the breakdown overnight, so it is an important technical area to watch for day traders.

The bears would argue that nothing has changed fundamentally and will be happy to offer the GBP/USD at short-term resistances, until something changes. So, should the GBP/USD head lower again from around the 1.08 resistance area, then there’s only one obvious potential support level at 1.0594 en route to the overnight low. The area around 1.0594 level marks an interim high that was taken out by the second wave of buying this morning. It may act as support should the GBP/USD start to head lower again. If it doesn’t, then the next bearish target will be the liquidity below the overnight low of 1.0384, beyond which there are no other prior reference levels. So, the focus will then turn to 1.02, 1.01 and finally parity.

The bulls will be looking for opportunistic long trades too, given the sharp rebound off the lows and not to mention the fact price is severely oversold on the higher time frames. They feel that there is the possibility that the cable may have formed at least an interim low. This will be confirmed in the event price breaks above the shaded region on the chart, namely between 1.0781 (last support pre breakdown) and 1.0840 (Friday’s low). Any more above this zone is likely to trigger another wave of short-covering towards the 1.10 handle.

So, as far as today is concerned, the sellers’ line in the sand is around 1.0840, which was Friday’s low. Any move above it means the daily chart of the GBP/USD (not shown) will start to display a doji/hammer candle. Only at that point will the bulls have any sound technical reason to buy the GBP/USD. Otherwise, it will remain a sellers’ market.