After this week’s significant sell-off, gold has reached a critical zone and what happens here is likely to determine at least the near-term direction of prices. 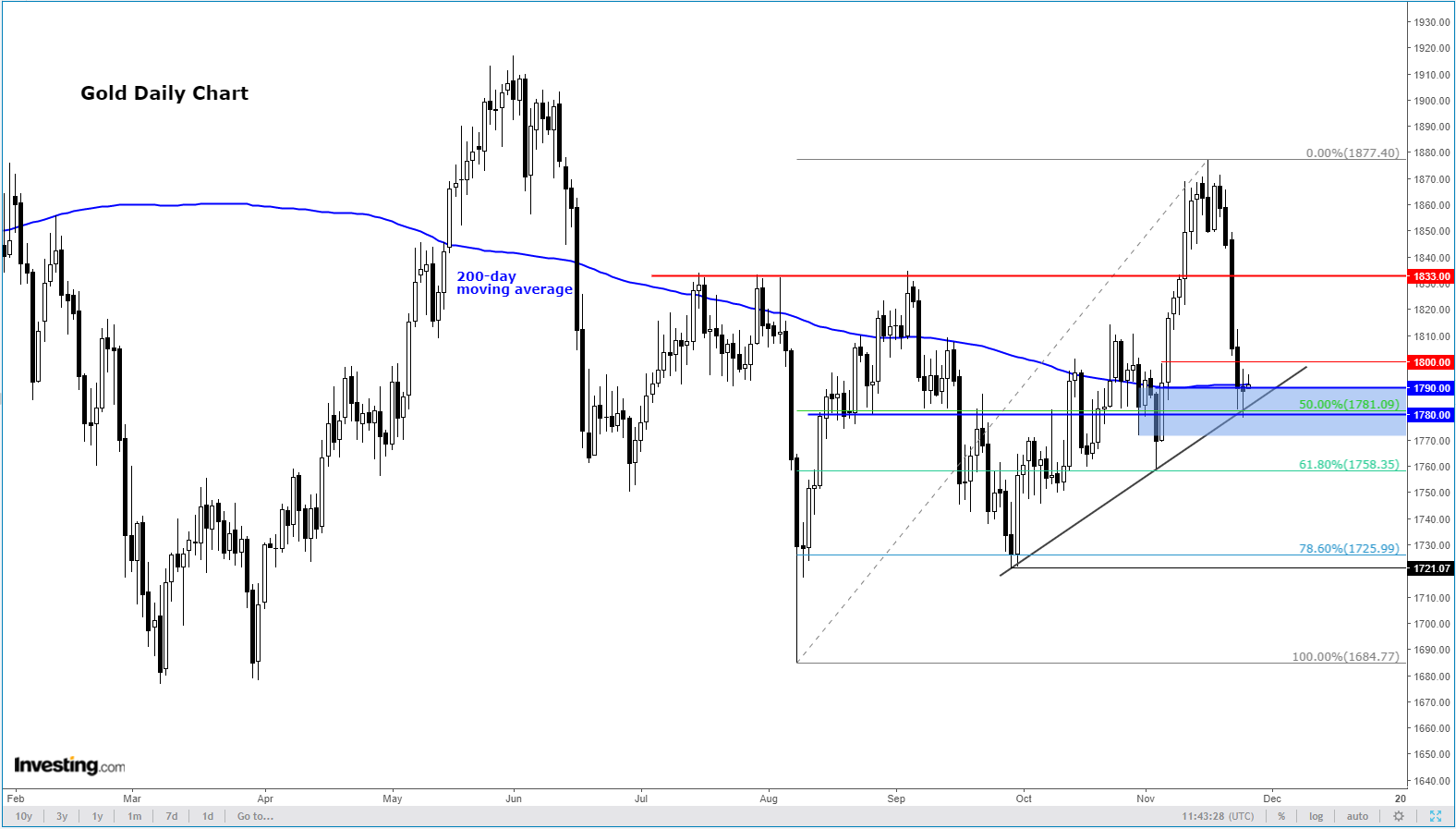 At the time of writing, the precious metal was testing a key support zone between $1790 to around $1780, or a bit lower. As the chart shows, gold’s price meets the 200-day moving average confluence with the 50% retracement level of its entire up move from the August low, as well as a short-term bullish trend line.

But is the damage already done—will gold go on to break this key support area as well?

Or will the dip buyers step in to take advantage of the cheaper prices as they seek to hedge against rising inflationary pressures?

Inflation is what could actually save gold, as investors seek to protect their wealth from the impact of rising price levels. Just take a look at the Turkish lira or the Japanese yen to see what inflation and high oil prices can do to you when hoarding fiat currencies over gold.

Yet, paradoxically, inflation is the exact reason why gold has sold off this week. Surging US inflation has raised investors' concerns that the Fed will pursue faster policy normalisation in the months and years ahead, with other central banks likely to follow.

As a result, bond yields have risen, increasing the opportunity cost of holding non-interest bearing assets like gold and low-dividend-yield assets such as growth stocks in the technology sector.

While high levels of inflation should support gold in the longer run, the short-term outlook remains murky at best. So, if you are a trader, rather than a long-term investor, it is best to be prepared for various scenarios.

Traders have the advantage to buy and short gold with leverage, while investors can only make money if gold’s value rises. My reports are mostly for traders rather than for long-term investors.

The bears would argue that the metal’s inability to hold its breakout above $1833, a key resistance level in the past that should have turned into support on retest from above, was the key turning point and the driver behind the follow-up technical selling we saw earlier this week.

Surely, gold should have held that level given elevated concerns over inflation and the fact that it had taken the metal several months to soak up selling pressure to build the energy for that eventual breakout.

So, the battle may have already been won by the bears after gold’s inability to hold there. By this logic, the consolidation around the 200-day average that we have seen over the last couple of days may just be a pause before the metal melts further lower.

If the base of the recent low at $1758 breaks, then it is probably all over for the bulls. In this potential scenario, we could see renewed selling come in to push gold all the way below $1680 area where it has previously found strong support.

What the bulls want

As far as the bulls are concerned, they want to see a confirmed reversal signal now, as so far we haven’t seen any major bullish signs.

Even if gold manages to find some support around the current levels, it is worth pointing out that $1833 has resumed its role as being a major resistance and pivotal zone. Thus, the potential upside may be limited.

This means that if you are long or bullish on gold in the short term, then perhaps it may make more sense to take at least some off the table if and when gold gets near $1833 again, assuming it doesn’t break further lower beforehand.

But if and when that $1833 level is recaptured, this will provide the market a signal that prices will want to go higher, after all. At that point, the bulls can trade with more confidence and buying any future dips back towards support would make more sense.