Gold and silver remain on course to end higher for the second consecutive week after ending their 4-week losing run as the US dollar and bond yields, including the 10-year Treasury note, eased back.

Sentiment has turned positive towards the metals on the back of softer-than-expected US macro data and Federal Reserve’s last policy meeting minutes , both pointing to a pause in the central bank’s rapid rate hikes later this year.

Following last week’s rally when gold reclaimed the 200-day average and its bullish trend line around the $1,840-$1,845 area, the precious metal has spent most of this week consolidating those gains. But on Thursday, it created a small hammer candle on the daily time frame as the dip buyers supported that $1,840-$1,845 area, suggesting the metal may be ready to resume higher from here: 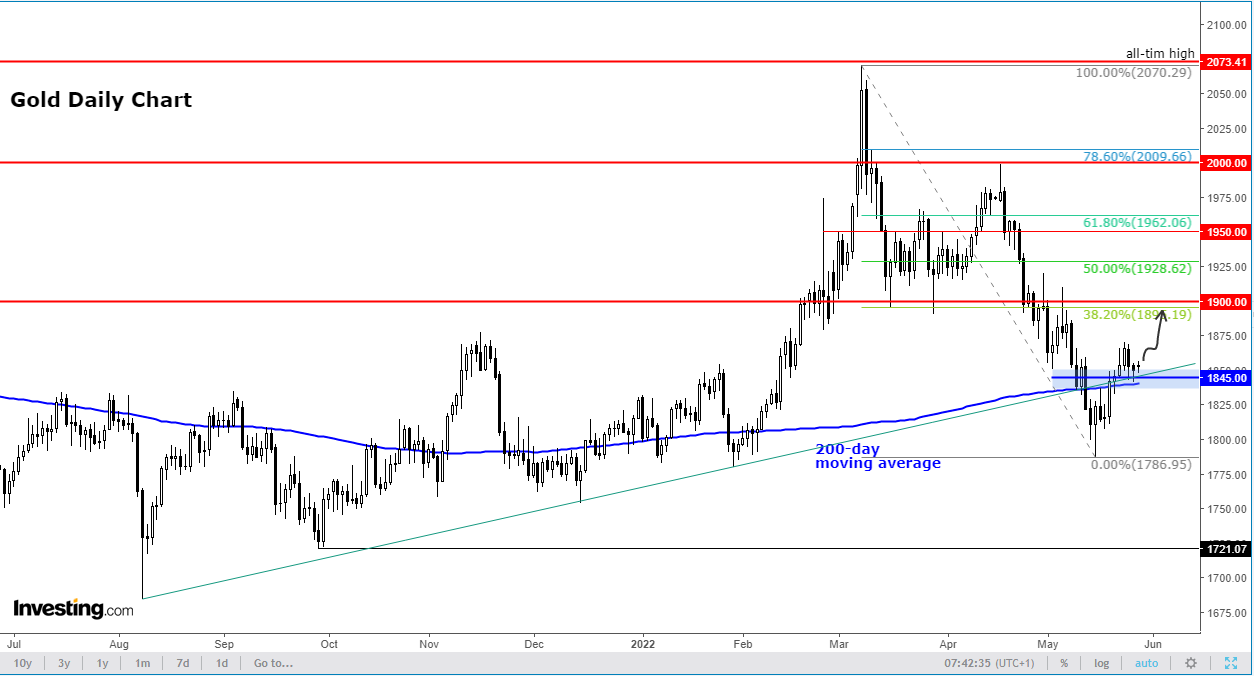 If support holds, as I suspect that it might, then I would be looking for an initial rally towards $1,900, but potentially much higher. The $1,900 level is where gold had previously found strong support on several occasions before this level finally gave way in the latter parts of April as bond yields and the dollar both rose. It is also worth pointing out that we have the 38.2% Fibonacci level converging around that $1,900 area, potentially making it a strong area of resistance.

However, the macro backdrop remains supportive for gold, meaning the long-term path of least resistance is to the upside in my view regardless of what it does in the short-term and around the $1,900 level, should it get there.

Until a few weeks ago, gold was unable to take advantage of demand from inflation hedging or flight from riskier stock markets. Investors were keen to pile into the dollar instead, which obviously weighed down the buck-denominated metal. What’s more, gold was held back all this time due to rising bond yields, making this non-interest-bearing commodity less appealing for yield seekers.

But as we have seen in recent weeks, both the dollar and yields have started to go lower. This comes at a time when economic uncertainty remains high with inflation surging across the world, which is hurting the pockets of consumers and profit margins of companies. We have seen evidence of this uncertainty for example in the stock and cryptos markets with the NASDAQ falling into an official bear territory and Bitcoin getting an absolute hammering.

So, when you consider all of the factors mentioned above, if gold was ever going to rise, you would feel right about now would be that time, as investors continue to seek safety from riskier assets and hedge against soaring inflation. Of course, let’s also not forget that gold is still about 10% cheaper compared to the near-record-high it reached in early March before it sold off.

Thus, it is not unreasonable to expect that many investors and traders would find gold and silver valuable at these levels and after the recent bullish price action.