The rally in the U.S. dollar fizzles as China relaxes some of its COVID policies after widespread protests. Once the risks from China's strict zero-COVID policy lockdowns eased, traders refocused on expectations on the likelihood of a slower path to higher U.S. interest rates after last Wednesday's Fed minutes revealed policymakers agreed that it would soon be appropriate to slow interest rate increases.

On Nov. 10, U.S. inflation slowed more than expected, rising 7.7% year-on-year (yoy), the shallowest climb since the beginning of 2022. Also, the Fed's preferred measure, core prices —excluding volatile (and therefore less representative) energy and food—rose 6.3%, dropping from a 6.6% increase in September, which was a forty-year high.

Accordingly, traders readjusted their bets to a half-percentage-point increase at the Dec. 13-14 FOMC meeting, down from the last consecutive four 0.75% hikes.

With expectations for slow rate hikes and the dollar in correction mode, gold is in the clear for a rally, at least in the short term.

Let's see how this dynamic translates into the price and its trajectory. 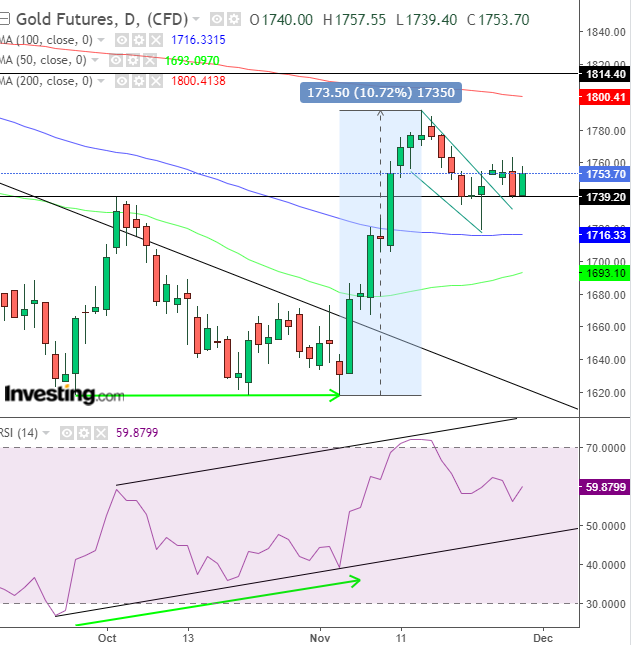 Gold may have completed a falling flag, bullish after the initial 10.7% surge in 8 sessions. This pattern is of the continuation variety because technicians expect the preceding, nearly straight advance to repeat itself upon the flag's clear upside breakout. That expectation is because of the dynamics that generically drive this pattern. Traders lock in profits after an almost-too-good-to-be-true advance, during which time they contemplate whether they got lucky or were correct. The upside breakout occurs after ongoing demand absorbs all available supply and buyers increase their bids beyond the flag. Early bears kick themselves in the pants for not having enough faith in themselves and rush back in.

Conversely, bears learn from their mistake and join bulls. Traders on the sidelines pick a side, and now we have a market going up. Of course, this is a simplified explanation, but that is the assumption currently driving the market.

So I look for more clues to support this view.

The RSI, which measures momentum, provided a positive divergence when rising when the price was flat, alluding that the price could follow. However, the clearest indication is that the flag developed after a double bottom. That means the bulls gave all they were willing to give to overcome the hindrance of the September and October highs.

Traders stung by the near-7% drop from the $1,730s were concerned that the bearish stronghold would hurt them again. So, bulls gave it a push, and once they made it through, they rushed out, as already outlined. However, the flag's upside breakout above the neckline bolsters the now bullish stronghold. The fact that it happens precisely on the neckline of a double bottom reinforces the bullish message.

Note how the 50-DMA resisted the previous four peaks. Note the price paused before overcoming the 50 and 100-daily moving averages (DMA) with doji. Then, after finding resistance by the 200-DMA, which was the technical impetus for the flag, the 100 converted to support as the price sank intraday when Fed minutes were released.

Now, the price, and the fight, is between the 100-DMA and the 200-DMA, which realigned with the August peak.

Conservative traders should wait for the price to close above the Nov. 25 high, then wait for a return move that confirms the flag's support before risking a long position.

Moderate traders would wait for another high above the initial breakout and a pullback for a better entry.

Disclaimer: The author does not have a position in any of the assets mentioned.