The USD/JPY extended its sharp decline for the third day ahead of the publication of the U.S. non-farm payrolls report, moving below the 134.00 handle in early European trade when this report was written. But could we finally see at least a short-term recovery from these oversold levels? 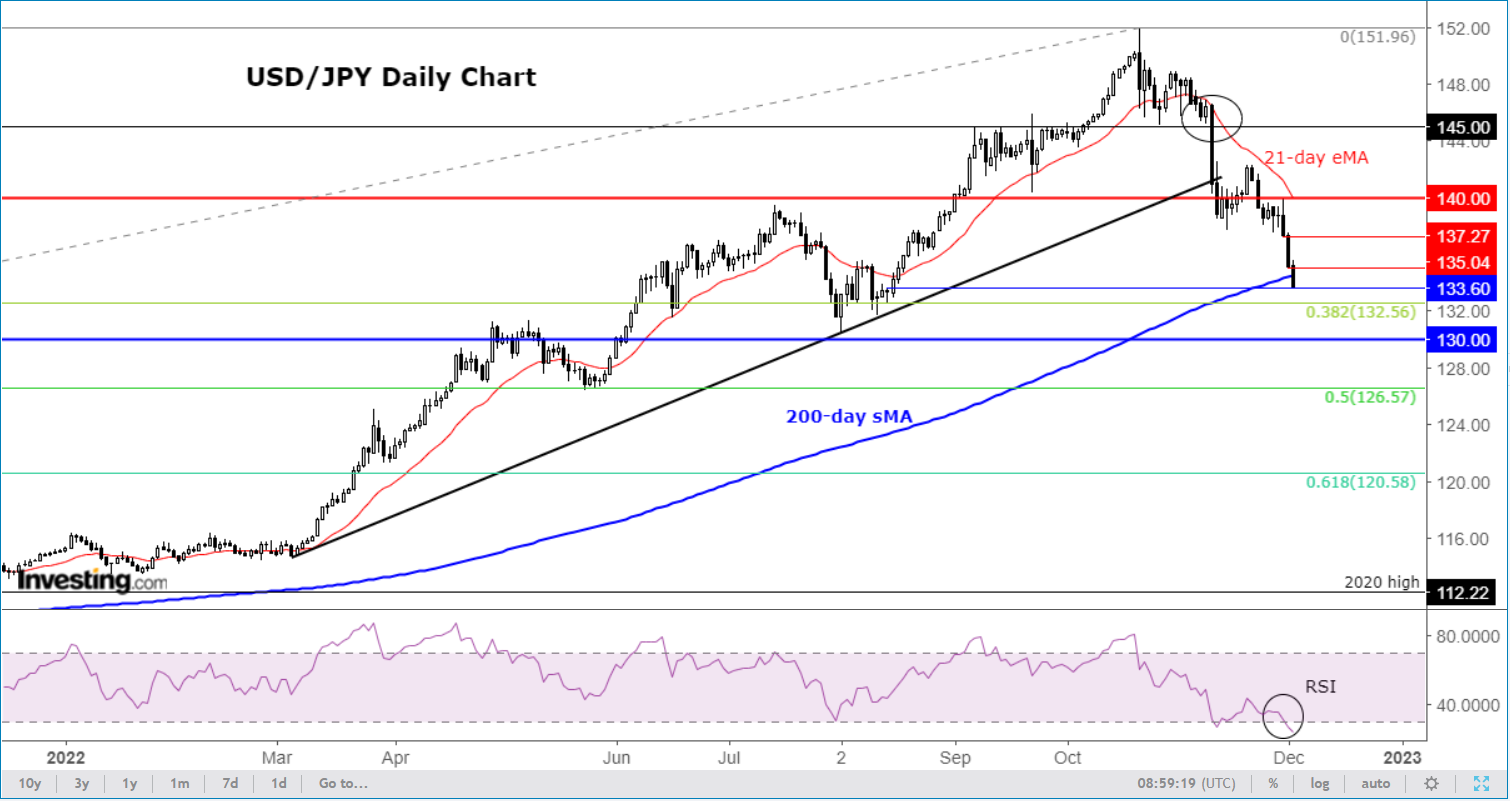 The USD/JPY is severely oversold on the daily and short-term time frames, after its recent big falls. The Relative Strength Index (RSI) is below the ‘oversold’ threshold of 30, although this alone is not a reason for traders to be buying this currency pair. But it does call for caution for those looking to chase the downside momentum.

As a minimum, the bulls now need to see a bullish candle on the daily time frame, such as a hammer. Ideally, we will also need to see a daily close well above the now-broken 200-day average at 134.50. With Thursday’s low coming in at just above the 135.00 handle, this is now the first line of defense for the bears. So, a daily close above this level will be a positive sign.

But pre-empting the bullish reversal can be costly, so it is essential we see that reversal first, as the U.S. dollar ’s downtrend has been gaining a lot of traction recently.

It is worth pointing out though that despite this big sell-off, the USD/JPY remains above the shallow 38.2% Fibonacci retracement against the big rally that commenced in March 2020. So, the very long-term trend is still bullish, owing to a still-growing monetary policy divergence between the U.S. and Japan.

The recent weakness in USD/JPY has been driven by investors reducing their high expectations about future growth in policy divergence between the two nations. Signs of U.S. inflation potentially peaking and the Fed dialing down its hawkish rhetoric have seen markets reduce their expectations of terminal interest rates . But the Fed’s policy remains in contractionary mode, while the BoJ maintains its extremely dovish stance. This should mean the downside risks will be limited for the USD/JPY moving forward, as long as the BoJ does not materially change its policy settings. That’s a big assumption as BoJ's Tamura has recently said the central bank’s policy should be reviewed, as the 2% CPI goal may be too high for Japan. A lower CPI target would imply the BoJ tightening its ultra-easy policy, which would be yen-positive.

It is also interesting to note that while the dollar has fallen sharply since Powell spoke earlier this week, the Fed Chair’s comments were not too dissimilar to what most of his FOMC colleagues have been saying recently. You would have thought that the market may have priced in a 50 basis point (bp) rate hike for December by now given the generally less hawkish comments from many Fed officials, and CPI and a few other inflation pointers to back that.

Anyway, the resulting rally in bond markets has sent U.S. yields lower along with the dollar. But the U.S. 10-year yield is now testing a major support level around 3.50%, which was previously resistance back in June. If this level now turns into support, there will be the possibility we might see a bullish dollar reversal, and potentially a bearish reversal on gold and stock markets. 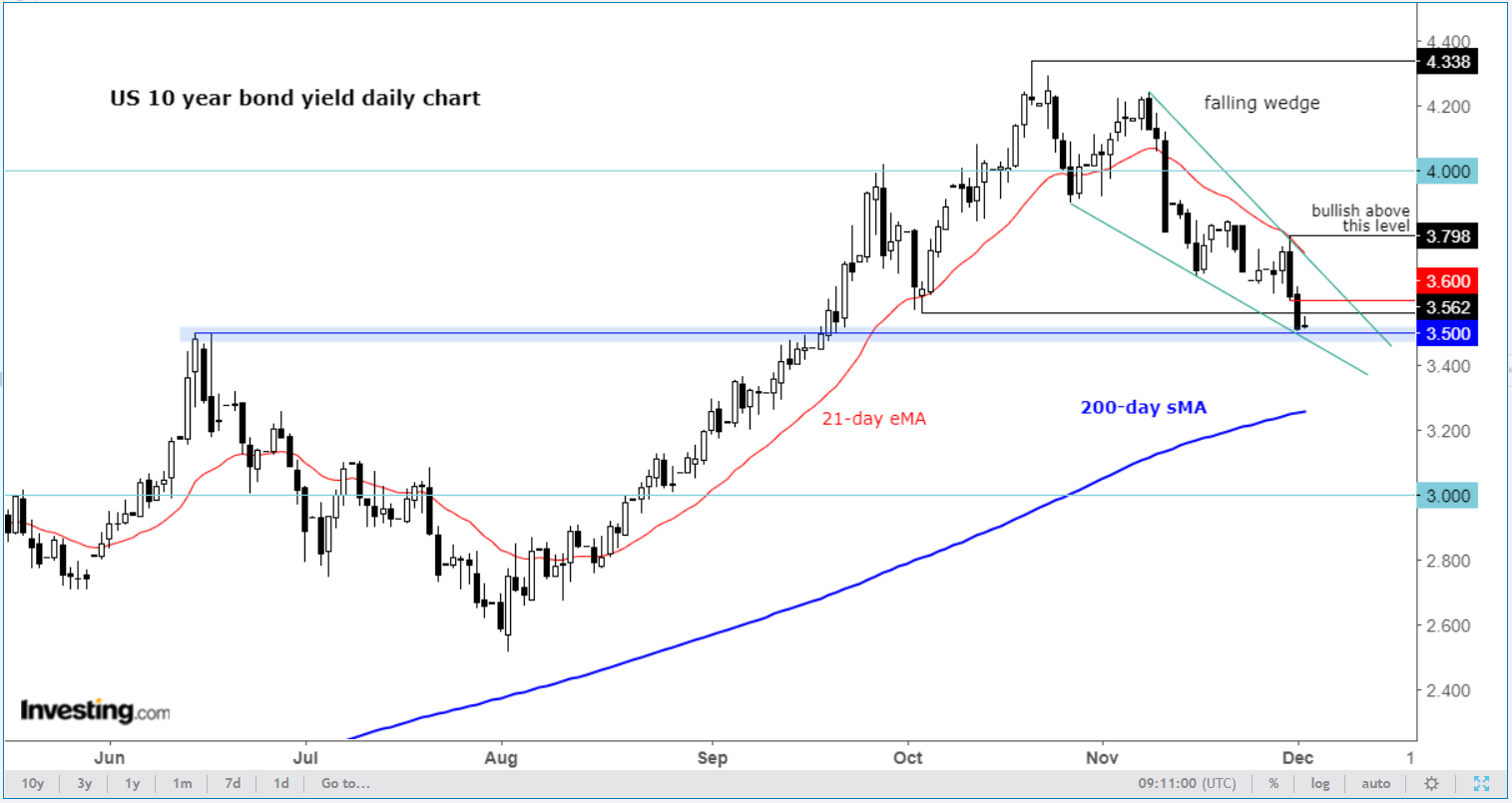 Finally, it is also worth pointing out that as well as the USD/JPY, a couple of other major currency pairs like the EUR/USD and GBP/USD , and some of the major stock averages, are all at, near or slightly above their respective 200-day moving averages. So, we could potentially see a reversal across the board, or at least a short-term move against the recent trends, as traders pause and make a more sober assessment of the whole situation.

Disclaimer: The author does not currently own any of the assets mentioned in this article.