Silver is 9.7% down for the year amid a strengthening dollar , rendering it the year's worst performing precious metal. The white metal declined for the past four straight months and this underperformance may have attracted bargain seekers.

But, silver tends to follow gold and copper , both of which are declining.

In addition, headwinds remain as the world braces for the withdrawal of government stimulus and an economic downturn. This has prompted HSBC to reduce its forecast to $22.25 an ounce for this year and $23.05 for next. Conversely, UBS Group forecasts the pale commodity to trade at $19 next year.

I'm inclined to agree with both.

I accept that silver could rise in the short term but expect it to decline in the long term. Here's why. 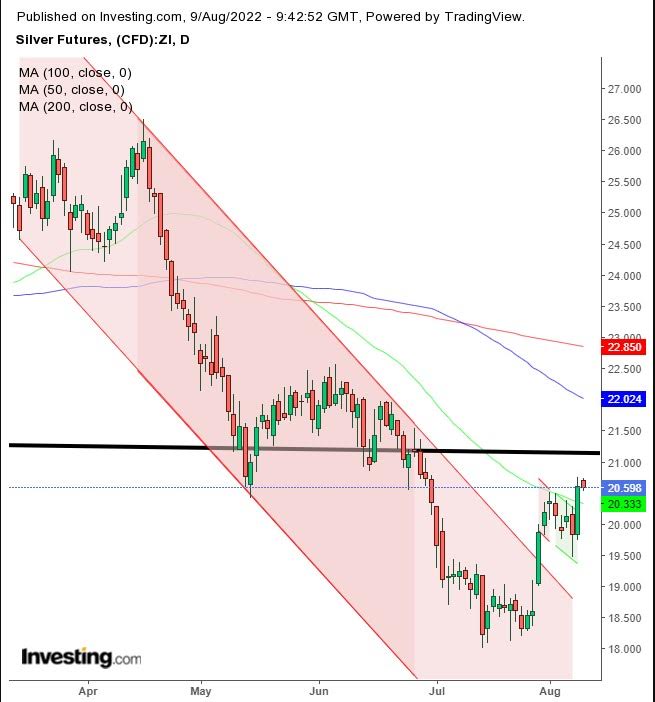 The price completed a falling flag, bullish after the preceding five straight day rally. The body of the flag is ranging, as bulls can't believe their good fortune, with the first 12% move in just five sessions in a very long time.

The movement included a 7% day surge to a monthly high on July 28 due to a short squeeze after the market interpreted Federal Reserve Chair Jerome Powell's recent comments.

Investors considered the Fed boss' rhetoric vague, opening the door to a hike of just 50 basis points in September after the central bank raised interest rates by 75 basis points back to back.

So, the flag pole was the result of the short squeeze. Additionally, bottom feeders couldn't believe their luck and quickly locked in profits. So, bears unwittingly joined forces momentarily with bulls, creating the sharp upward advance. However, the body of the flag is congested, a testament to sufficient demand to absorb the sudden supply, even as that end-of-season selloff pushed the range lower.

Finally, the upside breakout proves that the market drank all the available contracts within the field, and buyers were willing to up the ante to find more discerning sellers at higher prices. The short squeeze pushed the price above its falling channel in March and cut like butter through the 50 DMA.

The continuation pattern's implied target is the height of the flag pole, as all the interest is expected to play out after the breakout. Therefore, the general expectation is that the momentum will lead Silver from its $20.22 escape to $22.40, $0.15 above HSBC's target for this year. Now, let's see about that black horizontal trendline. 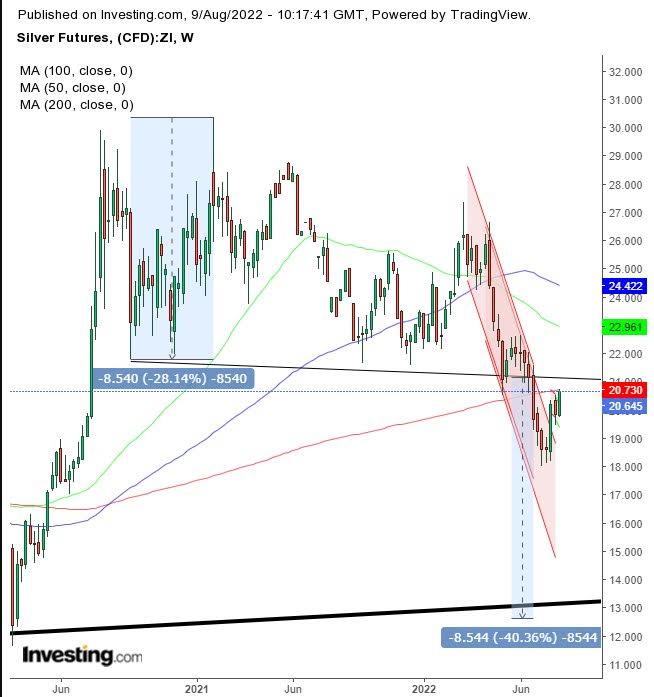 Now that we can see the bigger picture, it does not look as bullish, does it?

The precious metal completed a massive top since its August 2020 peak. The current rally appears to be nothing more than a return move amid a short space to retest the top's resistance.

The rally found resistance by the biggest MA of all, the 200 week MA, and receded. In April, the 50 week MA crossed below the 100 week MA, demonstrating a general breakdown in pricing, not just a fluke. The price did break above its falling channel, but it still respects the resistance of the May trough. The short-term's bullish flag is facing a monster bear.

Based on measuring its height, the top's implied target is in the $15 range, which just so happens to be above the uptrend line since the November 2001 bottom which occurred after dotcom crash.

Conservative traders should wait for the price to confirm the top's ongoing supply and short.

Moderate traders would wait for the price to trigger a return move to the flag that demonstrates support to risk a long position according to this continuation pattern, before joining conservative traders with a short.

Aggressive traders could buy a dip, counting on the flag, before joining the rest of the market in a short position.

Same as Aggressive, only after the flag demonstrates support.

Author's Note: I am not in the fortune telling business. I analyze the evidence and form opinions. Trading is not about knowing the future but about operating consistently according to a sound plan that incorporates your timing, budget, and temperament in the aspiration of joining statistics in overall trading success. Therefore, before you consider entering this or any other trade, close your eyes and imagine it lost. If you can't handle that, do not enter the transaction. The analysis is in the body of the text, not the sample. The sample may win or lose, which does not necessarily reflect the analysis's validity. If you don't know how to custom make your own plan, follow mine, to learn, not profit, or you'll end up with neither. I guarantee it. No money back.