Nasdaq 100 futures underperformed futures on the Dow , S&P and Russell 2000 and were the only index to trade in the red.

Given that the technology sector is a growth sector, it also suffers the most in a rising interest rate environment as investors move to sectors with lower valuations.

This rotation turned the Nasdaq 100 into this year's worst performer, sliding 32.7% and losing almost a third of its value. To put its slide into perspective, the small cap Russell 2000 suffered a smaller 25.4% loss as smaller companies also struggle when interest rates rise as they do not have the credit history of their larger cap competitors.

Although US yields have eased this morning, providing some respite to US futures, there are a few other things that may further hike US inflation .

OPEC is considering its biggest production cut since the pandemic, causing oil to open 2.8% higher and extend an advance to 4.6%. However, I don't expect it to keep moving higher.

The energy crisis in Europe escalated with Russia's Gazprom (MCX: GAZP ) halting gas supplies to Italy amid a dispute with its Austrian operator. Additionally, Eurozone inflation soared to a record 10% in September, a jump from 9.1% in August and higher than the estimated 9.7% which will pressure the ECB to raise rates further.

In a global economy, inflation is contagious, and the NDX may be sensitive to these pressures. Let's look at the chart. 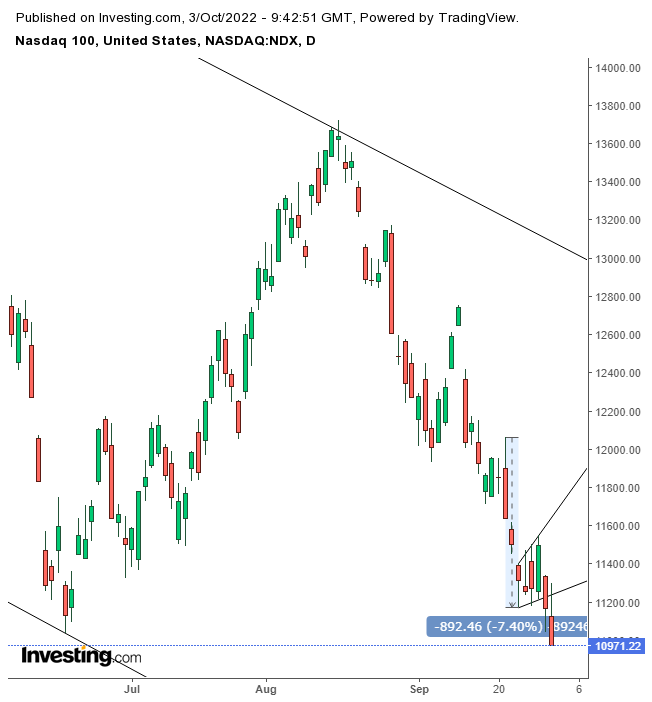 The tech-heavy benchmark registered a new low, extending the downtrend and completing a rising flag, signaling further lows. The new trough should end any talk about a bottom, a call I have been staunchly opposed to throughout the rally. My reason: if the long-term peaks and troughs point down, there is no bottom.

A rising flag is a period of rest after a sharp selloff. It slopes upwards as short sellers cover but remains crowded as fresh bears keep the pressure going. The downside breakout demonstrates that the short squeeze is over and everyone is now on the same page, continually selling. After the penetration, there could be a return move, on another short squeeze, before the price turns down and statistically repeats the same preceding sharp drop of almost 900 points.

Conservative traders should wait for the flag's penetration to reach at least 10,875 to satisfy a 3% filter to avoid a bear trap in case of a fakeout. They should also wait for at least one more day, during which the price doesn't jump back into the pattern, completing a minimum 3-day filter from Thursday's completion. Then, they'd wait for the potential throwback that confirms the pattern's integrity.

Moderate traders would wait for the potential throwback for a better entry, if not for added confirmation.

Aggressive traders could short according to their strategy.

Disclaimer: The author has no positions in any securities mentioned in this article.