Oil continued pushing higher today, extending its advance to the highest level for WTI since October 2014.

The energy commodity has been boosted by the increased likelihood of a supply disruption after "Yemen's Houthi group attacked the United Arab Emirates, escalating hostilities between the Iran-aligned group and a Saudi Arabian-led coalition," according to Reuters.

Analysts at Goldman Sachs have been forecasting for a while now that crude pricing could potentially hit $100, albeit not necessarily for geopolitical reasons. As for technical signals, at least for the short term, they are not as positive on the likelihood of a three-digit number on the horizon. 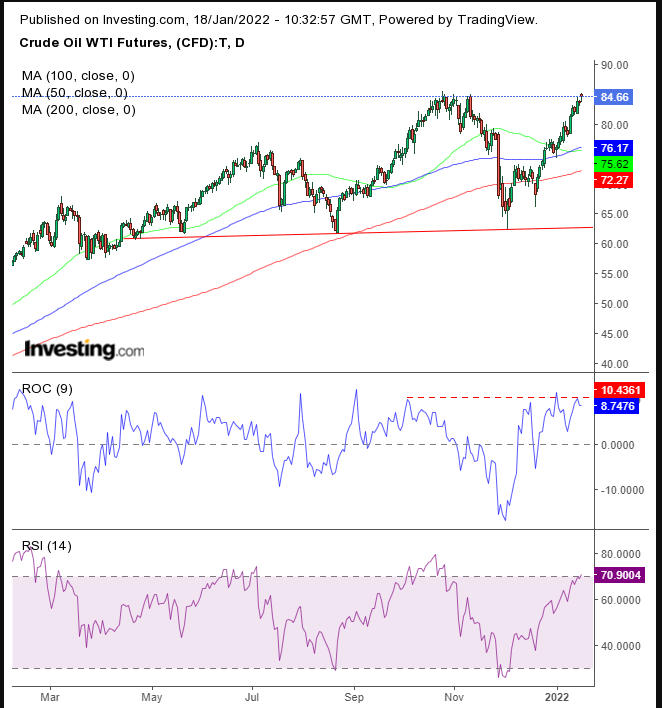 Crude's price jumped today, creating a rising gap. Prices generally open much higher when there are only buyers, something that could therefore be considered bullish.

However, a gap up could also be the initial setup for a bearish move. A rising gap could be beaten back by bears, based on breaking headlines that change the overall oil demand picture, or via a concerted effort to push the price much lower, potentially creating a falling gap. Should this occur, the rise and fall could become an Evening Star, a bearish indicator signaling a trend could be about to reverse.

As it is, today's trading may form a hanging man instead which is also a bearish indicator. This would occur if prices close below today's opening price—also showing a bearish retaliation to a bullish failed attempt.

If prices track lower from this point, it would raise the odds of a massive top should they fall below today's low and head toward the mid $60s level.

Despite the price acceleration, the 50 DMA fell below the 100 DMA, demonstrating that the rate at which prices are escalating may still be slower than the previous ascent. While the RSI continues to point higher, it's already in overbought territory.

Moreover, the more sensitive momentum-based ROC indicator is curving lower in a negative divergence to today's price jump. Also, the ROC has reached a repeated resistance level since Oct. 4.

Conservative traders should wait for the hammer that's forming to be blown out before going long or for the potential top to complete before shorting.

Moderate traders would short upon the confirmation of the hanging man, with a close below the natural body of today's candle, if it closes as a hammer.

Aggressive traders could short in the proximity of resistance, allowing for generous risk-reward ratios.