Shares of multinational, mega-cap tech gaint Meta Platforms (NASDAQ: FB ), the company formerly know as Facebook, closed up 1.55% on Tuesday. That's undeniably a positive move, but the stock is still well off its recent highs, down as much as 16% since early September.

Meta is listed on two major US indices, the S&P 500 which climbed 2.07% during yesterday's trading and the NASDAQ 100 which surged on Tuesday, +3%. Both indices did quite a bit better than FB, over the same timeframe.

So why is FB underperforming by just about any measure?

Though we don't actually know, we can speculate since there are a variety of possible, fundamental headwinds currently battering the company.  After the most recent whistleblower, Frances Haugen, made headlines in late summer, sentiment about Facebook's social media platform, and the company itself, has soured—fans are no longer as enthusiastic. Users and investors alike may also have grown tired of Facebook's seemingly endless slimey antics.

Adding to the negative sentiment, the company's recent rebranding, to Meta Platforms, seems puzzling to many and senseless as well. Myriad investors and users see it as an effort to simply put lipstick on a pig—without really improving the product or rectifying the company's many failings.

As well, tying the company to the metaverse and its virtual universe aligns it more with the cryptosphere, where an escalating array of metaverse tokens have carved out an alignment with the fortunes of all cryptocurrencies, which are currently mostly struggling.

For traders focused more on technicals, price action is the only thing that matters since it's an expression of supply and demand, the primary thing that moves markets in their universe. 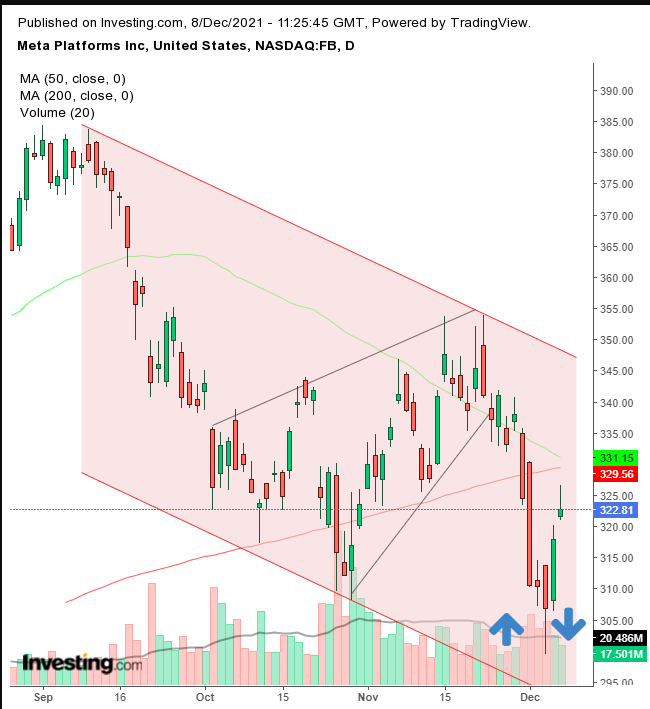 After FB shares achieved the target of a rising wedge, they found support at the bottom of a falling channel. However, yesterday's lower close formed a bearish Shooting Star, below the 200 DMA, as the 50 DMA hurtles down toward the formation of a Death Cross, suggesting the price may never reach the channel top.

The Shooting Star followed a rising gap, which looks like the set-up for an Evening Star, completed with a long red candle, digging deeply into Monday's green candle. However, we wouldn't give too much credence to an Evening Star that doesn't follow a substantial rally. This one just started so has little to give back by way of a reversal on its own momentum.

Also, observe the level of volume that supports the price action. Volume spiked at the same time as with the near-10% plunge from late November to early December. It drIed out during the recent rebound, suggesting participation is on the downside.

Conservative traders should wait for the stock to retrace all the way back to the channel top.

Moderate traders would be content with a long red candle.

Aggressive traders could sell a rally, since premarket trading is up about 0.5% at time of writing at $322.81, while accepting the higher risk of going rogue against the tides, for the proportionately higher rewards of being quicker than the rest of the market on the way down. A coherent trade plan is essential. Here's an example: