This post is part one of a two-part series. Today, we discuss the commodity. In tomorrow's post, we'll address the effect on Russia's currency.

Natural gas prices had more than halved since Feb. 24, when Russia invaded Ukraine, after jumping by 52% previously. The earlier price run-up was partially triggered in November when the US began broadcasting that Russia was planning a large-scale attack against Ukraine. The warnings and concurrent troop build-up at the Ukrainian border grew more forceful in December. As a result, natural gas has leaped by 100% since the Dec. 30 low.

So, does a commodity that's doubled in value over a three-and-a-half-month period have any more room to run? Of course.

Since the fundamental driver of price is supply and demand, and with Russia's gas exports accounting for 45% of European gas imports, a Russian halt will dramatically reduce supply. To be sure, if Europe capitulates to Putin's demands and purchases his commodity with his currency, supply may resume. However, even if Europe were to give in to Putin on this issue, it's likely not a decision that will be made haphazardly by either party, thereby leaving room still for a supply cut along with lots of uncertainty. Plus technicals are signaling a complicated picture as well. The futures contract appears to be testing the top of a Falling Flag, bullish following the preceding explosive rise, almost 81% in just over a month, from the Mar. 15 low to the Apr. 18 high which makes up the Flag Pole. The volume that accompanied this nose-bleed ascent spiked accordingly, supporting the price.

Volume receded as the flag waned, reinforcing the interpretation of the pattern. Fueling these moves is likely just one thing—the price headed lower on profit-taking, as traders fortunate enough to have been part of the initial, powerful run-up decided to take their phenomenal windfall and move out of the market. Now, as the corrective dip begins to reverse, they may be questioning their earlier move.

Indeed, given that the price actually receded on bullish momentum, rather than because of a change in fundamentals or psychological pessimism, technical analysis anticipates the next likely move to be an upside breakout since bulls remain in control even if all former supply has already been absorbed and new bulls must raise their bids to find more demanding sellers at higher prices.

That upside penetration signals to early bulls that there is still room for more profit, tempting them to get back in even as undecided traders increasingly decide to join the party. Short sellers are caught in the crossfire of rising prices getting sucked into a short squeeze. In other words, in this environment, most market participants are on the same side, rushing to acquire more supply as cheaply as possible before prices go even higher. Of course, this activity keep pushing prices higher.

Nevertheless, technical analysis cannot analyze any one event in a vacuum. It's essential to understand every move within its context. Note, that the bottom of the flag bounced precisely above the Oct. 6 high, demonstrating that a previous resistance flipped to support after the price level was violated.

After the price lost 45% of value, from the Oct. 6 high to the Dec. 30 low, traders presumably thought it would be good to sell again in early April, when the price reached that level again.

However, geopolitics may have forced some to cover shorts, a losing position done by buying, pushing the price against their jobs. Then, when that last push was over, the end of the short squeeze left a temporary demand vacuum, allowing the price to wane in the form of the Falling Flag.

Still, the previous Oct. 6 high was no ordinary peak. Rather, it was the highest level for the commodity since 2008. When traders realized how wrong they and others have been about shorting at those prices, they decided not to make the same mistake twice and went long.

That's not all. Via the longer term view, technicals are perhaps even more positive. 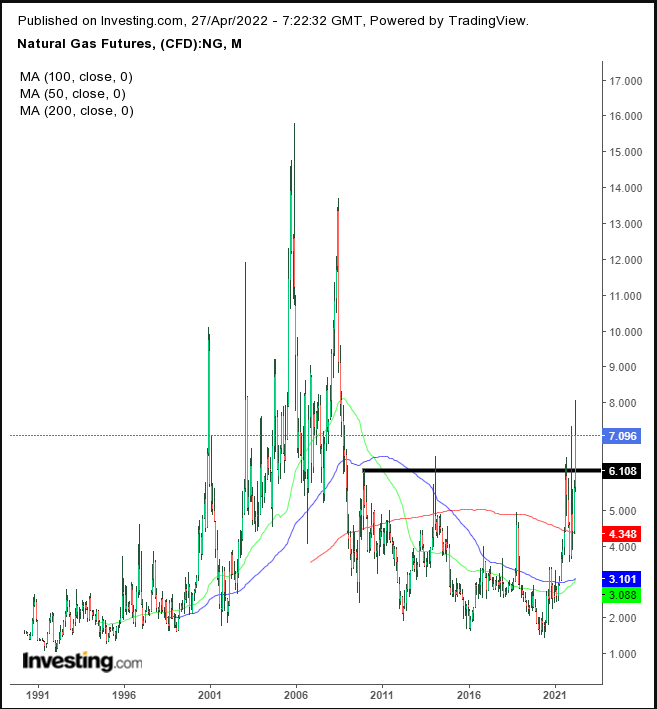 The recent moves turned the 200-month MA from a long-term resistance to support, propelling the contract to finally complete a bottom that was 13 years in the making—for the first time on record.

Conservative traders should wait for the price to break the flag's topside, with a close above 7.500, then wait for a return move that retests the flag's support.

Moderate traders would wait for an upside penetration of the 7.200 level,  then wait to buy the dip.

Aggressive traders could enter a contrarian trade, shorting the contract, pushing against the same price for the fifth session, before joining the rest of the market upon an upside breakout or a retest of the flag's bottom.