Crude oil climbed for the third day in a row yesterday, hitting a six-week high, as traders continue to track tropical storm Nicholas which is heading toward the US's Gulf Coast, a key oil production region that's still suffering from the battering it received from Hurricane Ida just a few weeks ago.

As well, OPEC just increased its global oil demand forecast for the next year to 100.8 million barrels—raising their forcast to almost another million barrels a day.

That's even higher than the pre-pandemic 2019 demand level of 100.3 million barrels a day. The oil cartel sees improving vaccination rates and rising public confidence in the way governments are handling the heath crisis, which should promote travel.

Also, from a technical perspective, oil bulls are taking charge. 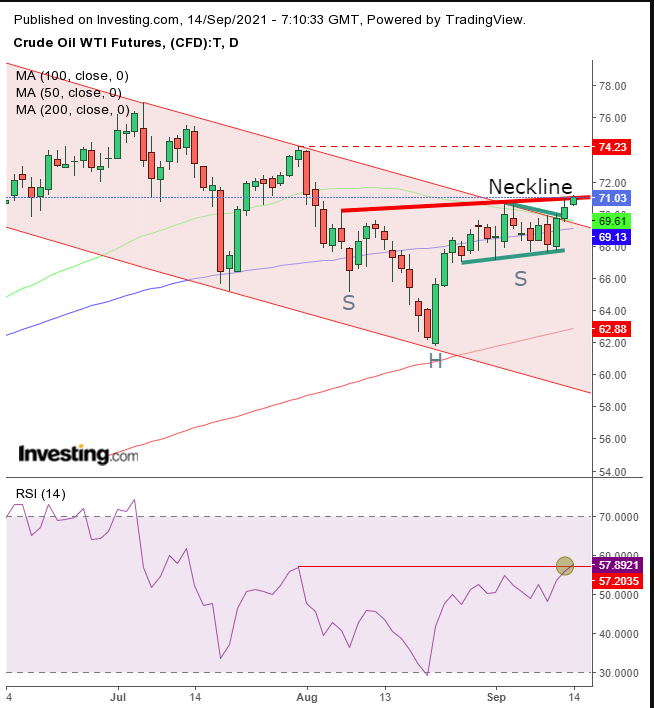 The bulls have now pushed the price through a series of presumable bearish strongholds:

Conservative traders should wait for the H&S to complete, then post higher than the July 30 high (red dotted line), then wait for a return move to retest the pattern’s integrity.

Moderate traders would be content with a penetration of the $72.50 level and wait for a buying dip, if not for support confirmation.

Aggressive traders could buy now, going on the pennant-completion, whose upside breakout included that of the falling channel, the 50 and 100 DMAs, backed up by rising momentum.