During Monday's Wall Street session, it looked early on as if the day's activity would deliver an S&P 500 blood bath as the index continued dropping precipitously. But two hours in, traders shifted from sell to buy and the broad benchmark rebounded from a 2.03% loss, which was nearing the Dec. 20 low.

According to the current narrative, dip buyers were the ones who blunted yesterday's fifth-day selloff—the index's longest losing streak since September.

However, there could be a more tangible intermarket connection for the sharp, upward reversal: yesterday as well, Treasury yields retreated from their highest levels since January 2020. From an equities perspective, the recent selloff in technology shares was triggered by the prospect of higher rates which would pressure companies whose stocks had the frothiest, most elevated valuations.

Easing yields could be considered a signal that markets may have already priced in the higher rates, at least for the time being. And sure enough, mega tech companies led the SPX's rebound.

Indeed, the  technology sector was the only one other than healthcare that managed to close in the green on Monday. Accordingly, the NASDAQ index was the only gauge that eked out gains, closing, albeit barely, in positive territory.

So, what then might the expected trajectory for the S&P 500 index be going forward? 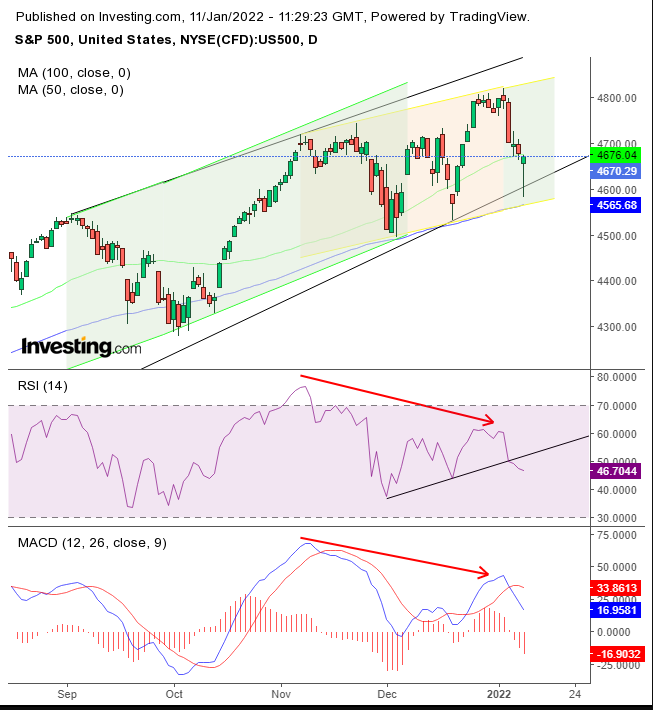 The index found support by its uptrend line, closing well off its intraday lows, near session highs, to form a bullish hammer. This reinforces the benchmark's rising channel (yellow).

However, observant traders would notice that the channel is losing altitude (green). In the same vein, the Moving Average Convergence Divergence's (MACD) short MA crossed below its long MA, demonstrating that current pricing is weakening relative to longer prices.

The Relative Strength Index (RSI) fell below its uptrend line. The MACD (whose strength as an indicator is in providing a positive or negative divergence) and the RSI both delivered negative divergences when failing to support the rise in prices from the November to the January peaks.

The same negative divergences appear in the 4-hour chart and the weekly chart, demonstrating momentum is weakening across a broad spectrum of timeframes, which doesn't support the recent price advances.

Prognosis: While the S&P 500 remains in an uptrend, it is slowing, which could be the first sign of a top.

Conservative traders should wait for the price to make new highs to extend the uptrend with the support of the indicators. Alternatively, they could wait for a trend reversal to consider shorting the index.

Moderate traders would risk a long position—given the attractive risk-reward ratio of being on top of the support—if the price nears Monday's lows and finds support.

Aggressive traders could enter a long position according to a coherent trade plan that agrees with their budget, timing, and risk tolerance. Here is an example: