US index futures managed to bounce back by mid-morning London session and turned positive on the day ahead of the publication of US monthly jobs report . There were no fundamental drivers behind the move, suggesting that the rebound was probably driven by the bears taking profit on their short positions from the day before. It has been a week of two halves so far, with the sharp rally at the start of the week fizzling out in the middle.

As we start the last day of the week, there could be another sharp move, potentially to the downside, given the renewed bond yield strength and hawkish Fed commentary. Unless we see a very disappointing jobs report which paradoxically may be good news as it will discourage the Fed to go too hard in rate hikes moving forward. But if the jobs report is decent, then that would mean status quo for rate increases. As a result, a better-than-expected or a not-too-weak jobs report could result in renewed selling for stocks.

Ahead of the jobs data, the major US indices were stuck between a rock and a hard place. After failing to break the 21-day exponential moving average and resistance around 3808/10 area in mid-week, the S&P 500 futures fell back to retest support at around 3735 area (old resistance), where it bounced this morning. Price action thus remains contained inside a tight range, with neither the bulls nor the bears willing to commit. Hardly surprising, given the jobs report risk.

Tactically, we can prepare ourselves for both bullish and bearish cases, with the latter being my base case as we are in a long-term bear trend. But given this week’s earlier rally and the index’s refusal to hold below the June low, it is possible we may have seen a near-term low on the S&P . This is why it is important that the bears must respect price action, even if the ongoing macro risks still point lower. 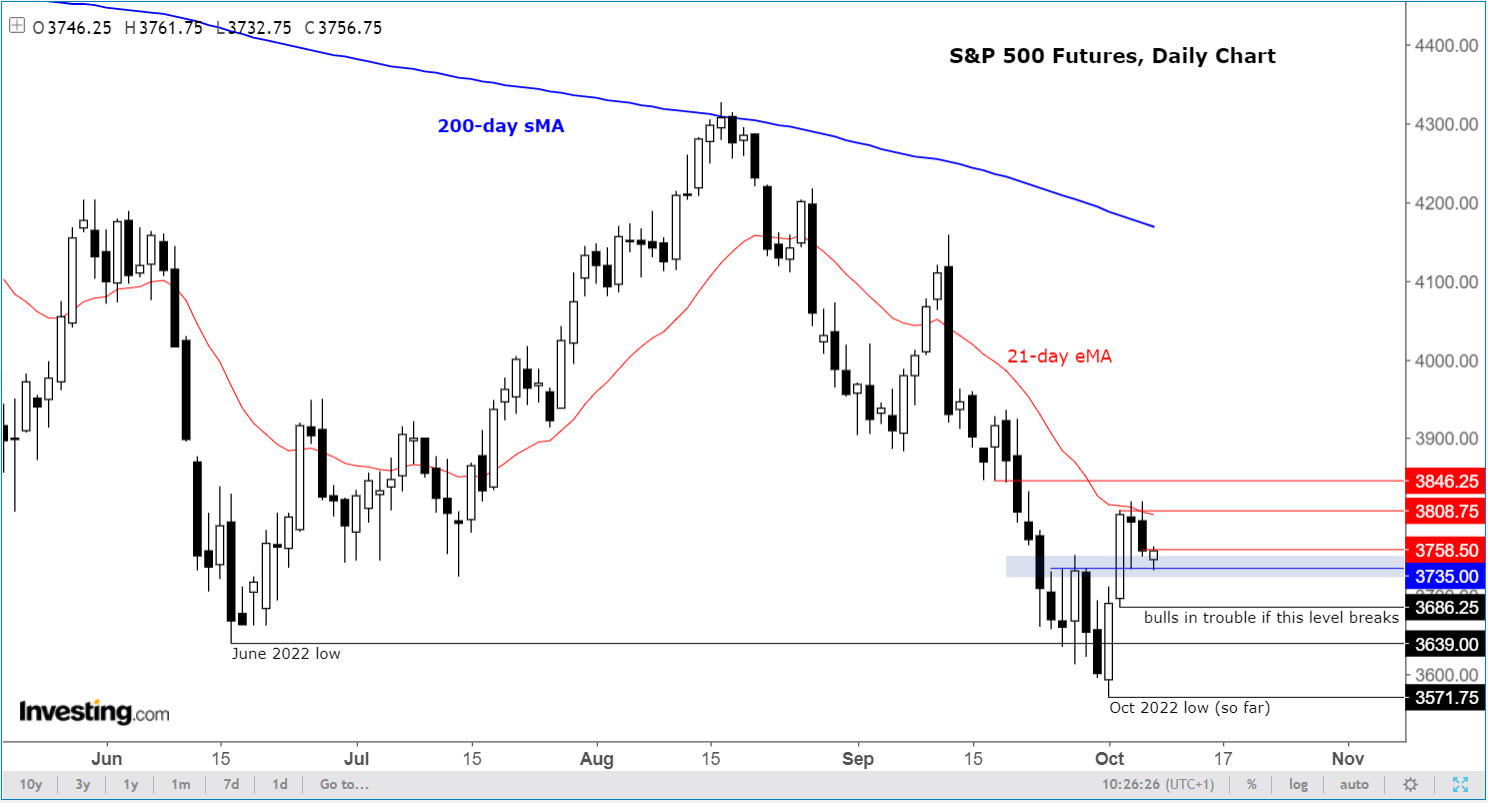 With that in mind, a break below Tuesday’s low at 3686 is what I am looking for in terms of confirmation that the market wants to head further lower. Why Tuesday’s low, you might ask? Well, on Tuesday, the market rallied hard. There’s no reason to go back below that day’s range, if the market wants to push higher. Thus, a break below it will probably force the bulls that had accumulated long positions at the start of the week to close out those trades. This will result in greater selling pressure and a move lower as result of the imbalance.

Aggressive traders who don’t (often) wait for confirmation will be keeping a close eye on short-term resistance around 3758. If we see signs of weakness here, especially after the nonfarm payrolls report, then it could be a precursor that we are heading towards that 3686 level (Tuesday’s low).

In terms of resistance above 3758, there are no obvious ones on the daily time frame until 3808ish, where the index has failed to hold above this week. Beyond that is the point of origin of the last breakdown at 3846.

Whether or not the market will be able to climb towards those resistance levels remains at least partly dependant on today’s US jobs report and bond yields. So long as we don’t see yields come down fast, it is unlikely, in my view, that the bulls would be too keen to step in aggressively. If yields were to rise further, then this will give the bears fresh impetus to short these markets.