The European market is gearing up for a jumbo rate hike by the European Central Bank. The expectation is weighing on the STOXX 600 Index as investors expect the euro to strengthen following the rate hike.

A stronger EUR/USD may create two headwinds for European corporates:

When a central bank hikes rates to slow an economy that is expanding too quickly, a recession is always a risk.

Despite easing in natural gas prices, European inflation remains around record highs so the ECB is expected to raise rates at 8:15 EST by 0.75% to 2.00%, its highest over a decade.

And we can see that these expectations are affecting demand for the euro. 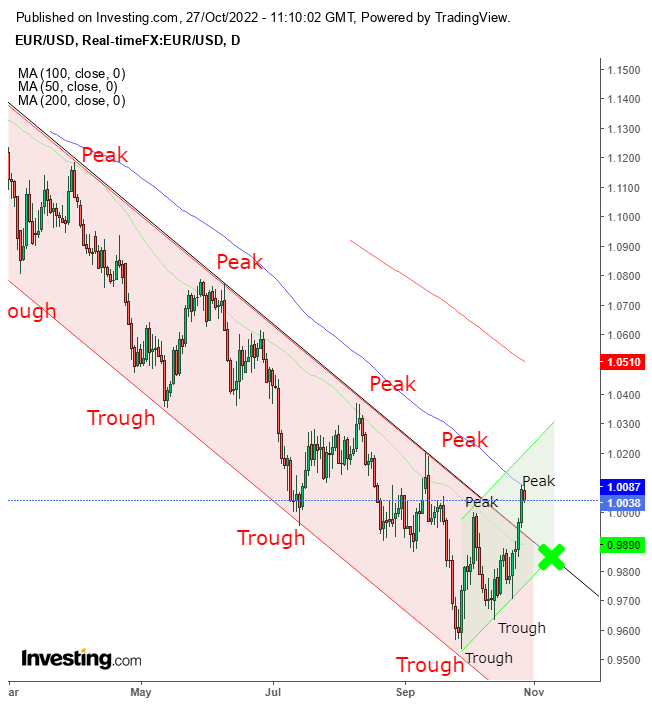 The price breached its falling channel's topside on Tuesday, establishing a short-term uptrend. However, the medium downtrend is still falling. It found resistance beneath the 100-day moving average (DMA) for the second day, having neared the top of a potential rising channel. The point where both channels meet could be a good place for support.

Moderate traders would buy the euro after it demonstrates accumulation at the bottom of the short-term rising channel (green) and the top of the medium-term falling channel (red).

Aggressive traders can short, assuming that if the euro rose on expectations of higher rates, it will fall on the news, even harder if the news is not what traders were expecting. Technically, the second-day resistance by the 100 DMA increases the chances for a drop. Finally, it is a good trade from a risk-reward perspective.

Disclaimer: The author has no position in the instruments mentioned in this article.