Elon Musk, CEO of Tesla (NASDAQ: TSLA ) has just announced that the electric vehicle (EV) car manufacturer, has manufactured over 3 million cars. Musk pointed out that this landmark is no small feat considering China's COVID-19 lockdown, where one third of the EVs were manufactured.

Still, while Musk congratulates his employees, this news underscores how small Tesla's car business is. The world's largest carmaker Toyota (NYSE: TM ) produced 10 million cars in 2021, and the second largest automaker, Volkswagen (OTC: VLKAF ) delivered about 9 million vehicles in the same year. Tesla's 3 million is in the company's entire history. Nevertheless, the EV maker hit a market cap of $1,000 billion last year, more than the market cap of the top 9 global carmakers combined.

As of now, the company's market capitalization is $940.14 billion. Is it justified?

First, we have to ask how much of that valuation is because of the business, and how much of it is because of everything surrounding its CEO—Musk's investment in SpaceX and cryptocurrencies, as well as his gurulike persona?

For example, how much did the whole cryptocraze impact demand for Tesla shares? 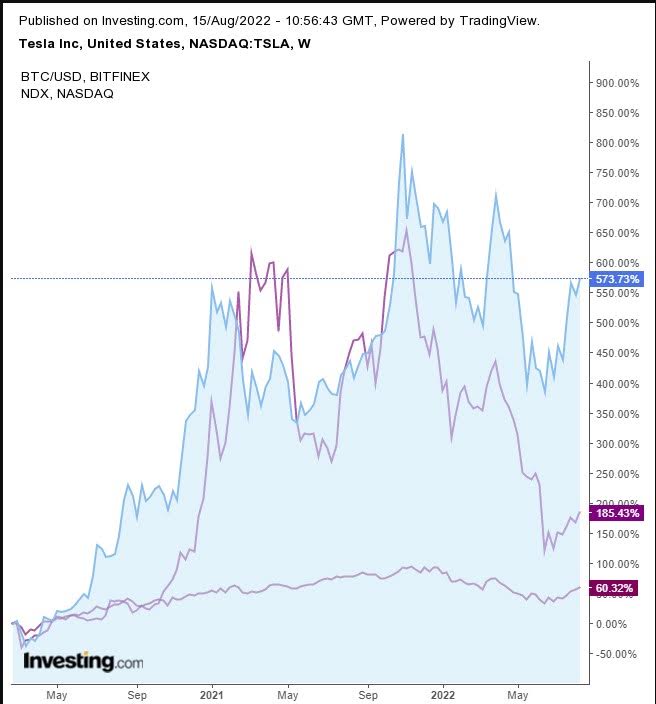 Looking at the chart we can see a high positive correlation between TSLA and Bitcoin , which it does not share with the Nasdaq 100 .

But despite the selloff in cryptos, for now the tide still seems to be with Tesla. Investors are looking forward to the three-in-one stock split this week and a dividend starting August 24. For example, Soros Fund Management added $20 million in shares to its holding. Its Tesla shareholding makes up an estimated 0.4% of Soros's $4.6 billion US equity portfolio. However, Musk has sold 7.92 million shares worth $6.88 billion.

Morgan Stanley's Adam Jonas expects a 32% gain in the share price over the next 12 months, targeting $1,150, which is a cut in his initial target of $1,200 due to the slowing economy.

So, here's my take. Tesla is likely to rise first before it falls. 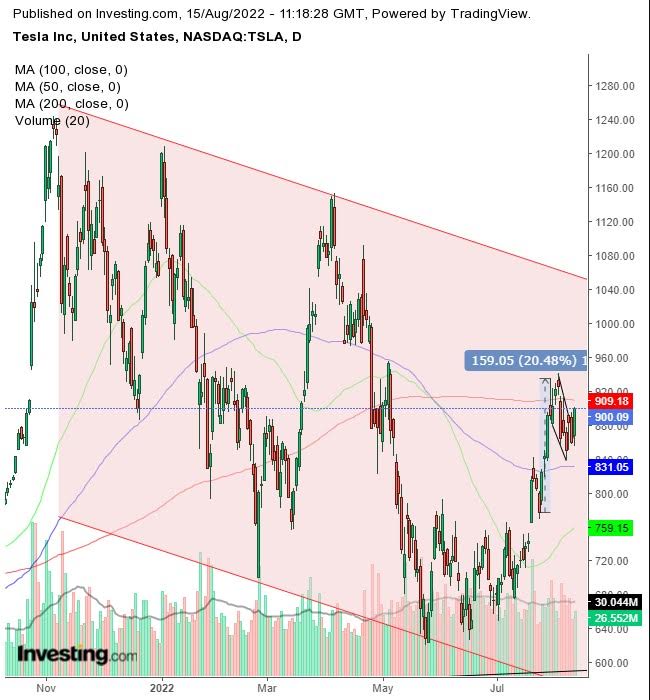 TSLA appears to have completed a Falling Flag, bullish following a 20% surge in only five days. However, I would prefer a spike in volume to support a breakout, and I would like to see the price close above the 200 DMA.

The upside move will bring Tesla to the top of a falling channel that has been dominating the price since its November all-time high.

Then, I'd turn bearish again. 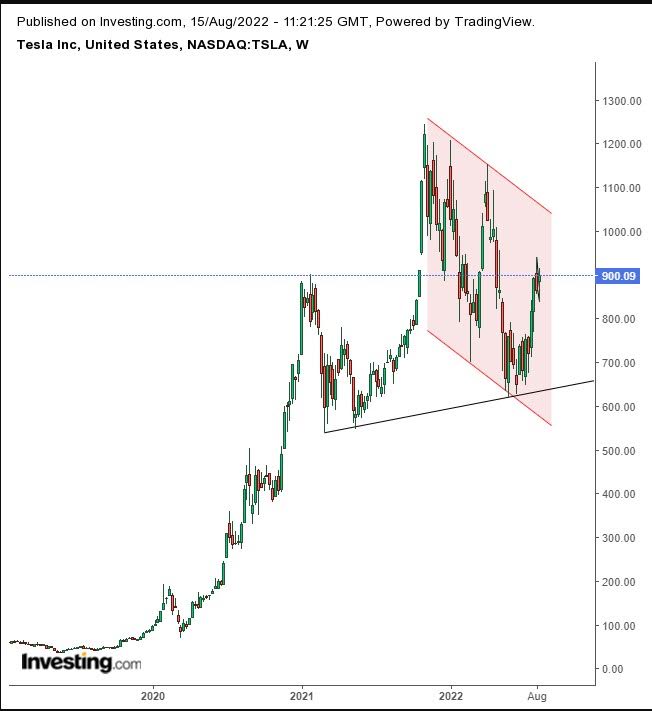 And if the falling channel remains intact, the price will complete a massive H&S top.

Conservative traders should wait for the price to close above the 200 DMA, then produce a return move that reinforces the pattern's support before risking a long position.

Moderate traders would wait for the close above the 200 DMA and return move for a better entry, if not added confirmation.

Aggressive traders can go long now, provided they are prepared for a potentially bumpy ride.

A trading plan should incorporate your timing, budget, and temperament for optimum results, but you can use my sample until you learn how to make one, for practice, not profit, or you'll end up with neither. I guarantee it. No money back.

Author's Note: I am not in the fortune telling business. I am an analyst, and this is my estimate based on the preponderance of the evidence. Successful trading is not about being right on individual trades but about trading consistently according to a sound strategy. Before entering this (or any other) trade, close your eyes and imagine losing it. If you can't accept that possibility, do not enter the trade. Happy trading!