Twitter (NYSE: TWTR ) shareholders have had a bumpy ride in the past six weeks. On Apr. 4, Tesla (NASDAQ: TSLA ) founder, Elon Musk bought a 9.2% stake, about 7.35 million shares, making him the largest shareholder in the company. After the news, there were no sellers, only buyers causing the price to open 22% higher, then extend gains to 27.4% on its best trading day since its IPO.

Then, on Friday, Musk tweeted that the deal was on hold, as he wanted to confirm the company's claim that at most 5% of accounts were fake. That day, the price opened 10.5% lower.

Finally, the selloff increased on Monday, extending the losing streak to its seventh session in its longest slide since December. The overall decline since Musk first tweeted his plan to delay was 17.8%, wiping out all the gains made when he bought his stake. These movements created a bearish pattern. 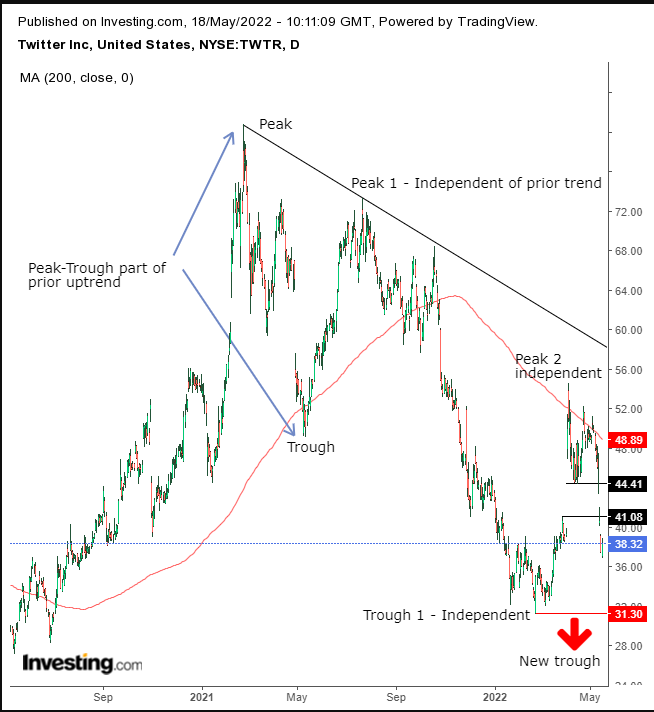 The first higher open, on Apr. 1, in retrospect, is an Exhaustion Gap, a jump run on fumes. The second gap on May 12 is a Breakaway Gap. The two gaps separated the price action from the rest of the chart, creating an Island Reversal.

In itself, this is not a powerful pattern. However, analysts identify the price behavior as part of a more meaningful move. Note that the structure occurred below the 200 DMA, which 'guarded' the falling trendline since the Feb. 4, 2021, all-time high. Altogether, the weight of the evidence suggests pressure on the stock.

Also, the Communications Services sector has been underperforming on multiple scales, between one month and five years. In the three and six-month period, it performed slightly better than the Consumer Discretionary sector.

Now that the TWTR share price has slumped, Musk said he may renegotiate the deal for a better price. Such headlines could further pressure the price lower. If the stock falls below the Feb. 24 low of $31.30, it will have established the conservative two peaks and two troughs independent of the prior uptrend.

Conservative traders should not short the stock before the price falls below $31.30

Moderate traders could short a rally that retests the gap area.

Aggressive traders could enter a long contrarian position, counting on a temporary rebound, after yesterday's bullish Piercing Pattern—when yesterday's price opened lower than Monday's closing price but then closed much higher. Money management is even more critical when operating aggressively.