The U.S. dollar peaked on Sept. 28, shy of 115.00. Another 5.5% rise would have taken the world reserve currency to its highest level since February 1986, after the September 1985 decision of the then G5 nations—France, Germany, U.S., U.K. and Japan—to depreciate the dollar relative to the yen and the Deutsche mark.

Today, the spiking dollar is again threatening a selloff in risk assets which could lead to a financial crisis. The 20-year high in the U.S. currency is threatening a dollar-denominated debt crisis in emerging economies, illustrated by the Indian rupee notching an all-time low on Oct. 20 and the Chinese yuan fell to all-time lows on Nov. 1. The loonie also slumped to a two-year low, the euro a 20-year low, and the Swiss franc dropped to its lowest level since May 2019, while at the same time it reached its highest level against the euro since January 2015.

On Oct. 20-21 this year, the yen fell below 150, its lowest since 1990, forcing the Bank of Japan to intervene in the market. On Sept. 25, the pound suffered its worst monthly drop since the Brexit vote, carving out an all-time low, as domestic woes exacerbated the flight from sterling. The super-strong dollar didn't just push around currencies, Gold and Bitcoin hit a two-year low on Sept. 28 and Nov. 21 respectively, oil topped out and stocks negatively diverged to the greenback.

After falling asleep at the wheel last year while U.S. inflation hit its highest level in over 40 years, the Federal Reserve hiked interest rates by 0.75 percentage points four consecutive times as the central bank repeatedly assured that it would do what was required to bring down inflation.

However, additional factors were driving the world reserve currency higher. Cryptocurrencies worldwide acted as digital dollars at the expense of domestic currencies and the bear market as well as the war in Ukraine prompted investors into the dollar as a haven.

The dollar peaked as U.S. CPI eased, and FOMC minutes revealed that Fed members were primed to slow the path of interest rate hikes. However, the 8% retreat in the dollar since its Dec. 28 high was also technical when an overcrowded long position unwound.

The Fed is squarely focused on employment as the driver of inflation so Friday's nonfarm payrolls could catalyze strong dollar moves.

Now, let's see how the complex themes impacting the dollar are playing out on the smoothed-out supply-demand gauge. 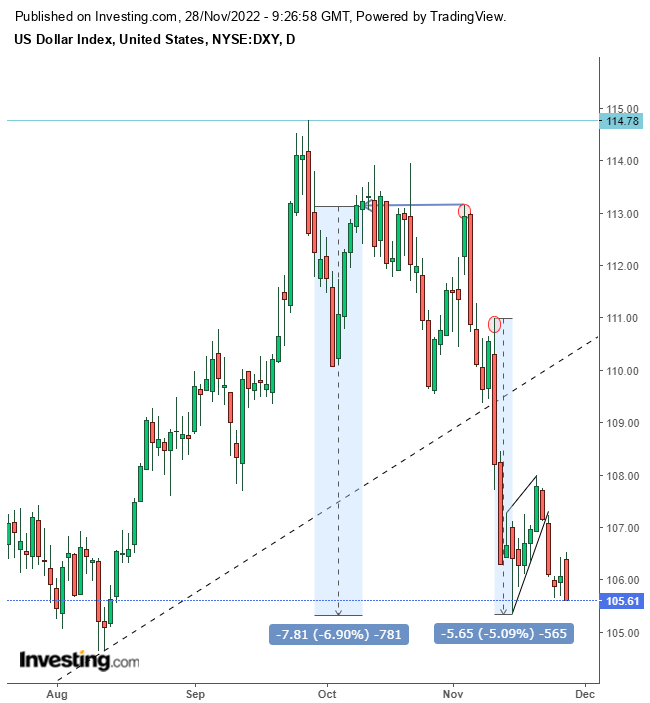 The greenback may have completed a rising flag, a rest period after a neck-breaking decline. The downside breakout demonstrates that new bears replaced earlier bears covering shorts after a heartstopping drop.

Conservative technicians measure the straight-line selloff from Nov. 11-15, a 5.65 move that preceded the range. Aggressive traders may measure from the top of the move on Nov. 3, providing a 7.81 plunge within eight sessions—from the 107.30 breakout. These two moves imply targets of 101.65 and 99.49 respectively.

However, even if the dollar follows through on this path, I expect it to be short-term before synchronizing with the medium-term uptrend. 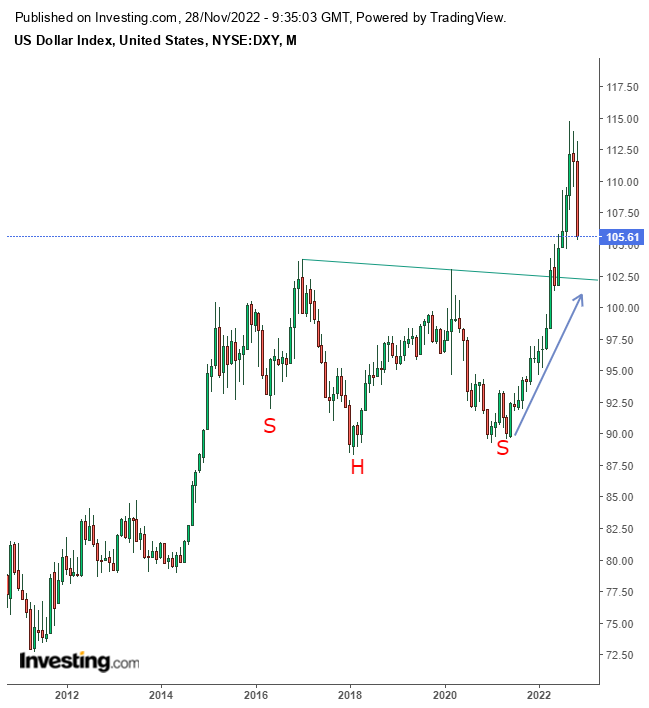 The U.S. currency completed a massive H&S continuation pattern, and the current decline is a return move to retest and confirm that the previous resistance turned to support.

Why would the dollar continue to rise if inflation is peaking and the Fed is eager to slow hikes? China's ongoing zero-COVID policy lockdowns together with the ongoing war in Ukraine are two very high risks to inflation.

Conservative traders should wait for a return move to retest the flag's integrity.

Moderate traders would wait for the throwback for a better entry.

Aggressive traders could enter a long contrarian position, bouncing off two-week lows, before joining moderate traders with a short.

Disclaimer: At the time of publication, the author had no positions in the securities mentioned.