The USD/JPY will be in sharp focus ahead of the US nonfarm payrolls report and inflation data in the week ahead, with investors, also keeping a close eye on falling crude oil prices and bond yields. There is a good chance therefore that we will see further strength for the Japanese yen in days and weeks to come, as some of the influences that had encouraged traders to short the currency are no longer valid or as prevalent.

The USD/JPY has already started to turn lower with rates breaking below a bullish trend line and the 50-day moving average: 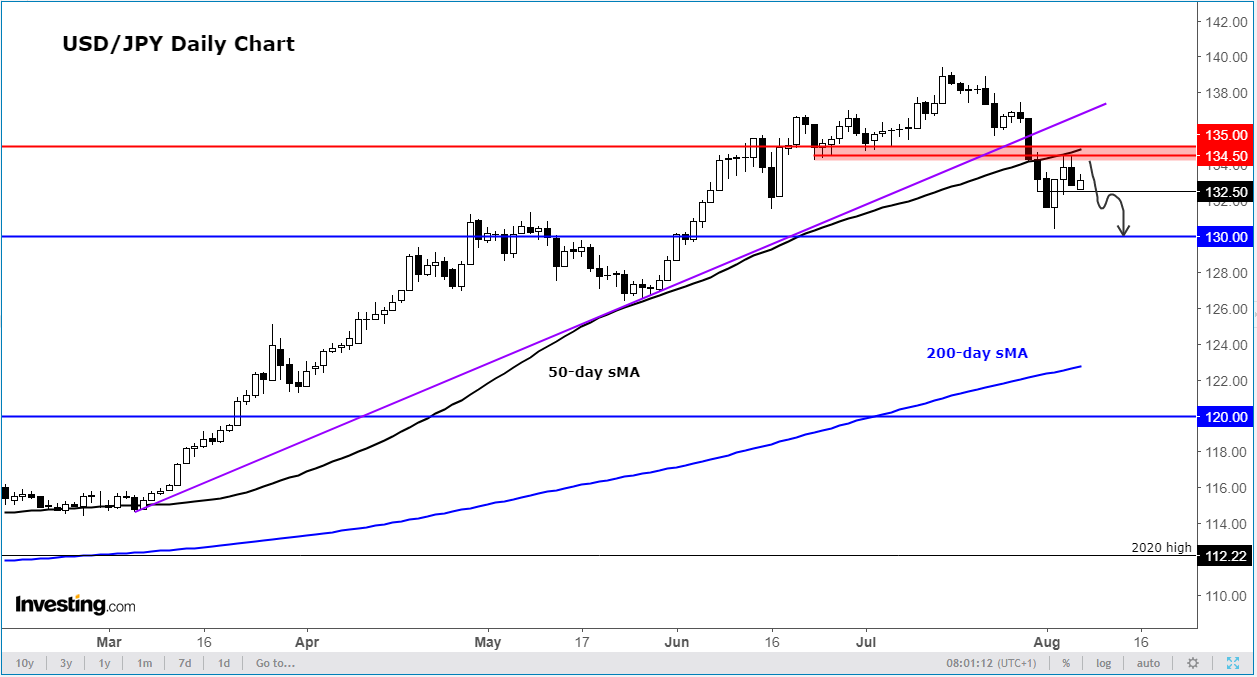 It has also broken below key support around 134.50 to 135.00, an area which has now turned into resistance. The short-term path of least resistance is therefore to the downside.

From here, it looks like we will see a potential drop to 130.00, and that move could happen as early as later on in the session in the event we see a very weak US jobs report.

The US dollar has actually started to weaken against a number of foreign currencies with even the euro and pound gaining some ground against it. This is because investors have cut back their expectations about further aggressive rate increases from the Federal Reserve due to signs of a weakening economy and peak inflation.

As far as the Japanese yen is concerned, it is fair to say that oil prices have been one of the primary drivers behind its weakness throughout the first half of this year. As oil prices rallied, the yen weakened as investors swapped their low-yielding Japanese currency with those of oil exporters where yields were much higher, including the US and Canada. The Bank of Japan decided not to join other major central banks in fighting inflation. Bucking the trend, it kept its ultra-loose monetary policy unchanged.

But in recent weeks, we have seen quite a sharp turn in most buck-denominated asset prices. The big drop in oil and other commodity prices has increased talks of peak inflation, causing bond yields in these countries to fall faster than that of Japan.

Something interesting to note from the above chart is that oil prices peaked first, way back in March, although it then consolidated in a big range, before starting to fall more profoundly around the start of June. We then saw the US 10-year bond yield head lower from around mid-June. But it took the USD/JPY another month before it too started to go lower.

From those summer peaks, WTI and US 10-year yields have fallen around 28% each in percentage terms at their lowest. But the USD/JPY is only around 6% worse off from its corresponding peak. Thus, the USD/JPY has some catching down to do with both crude oil prices and bond yields.

As far as the very short-term is concerned, all eyes will be on the US jobs report for USD/JPY traders on Friday, followed by next week’s publication of US CPI data. Obviously, if jobs, wages, or inflation data disappoint expectations, it is reasonable to expect the USD/JPY to accelerate to the downside.