Gold has been weighed down since March when the Federal Reserve raised interest rates for the first time since 2018.

The yellow metal continued to fall as the Fed was getting ready to increase rates at a faster rate.

Finally, the Fed raised its benchmark interest rate by 0.5 percentage points earlier this month, the sharpest increase since 2000 and analysts expect the Fed to raise rates seven times in 2022.

However, gold has been rebounding since Friday amid a decline in the dollar . 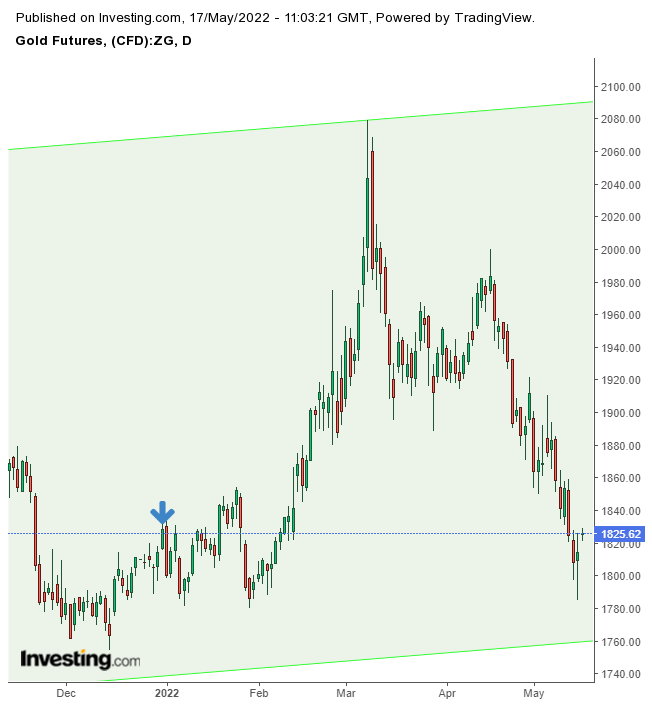 Now, let us take a step back and look at the bigger picture 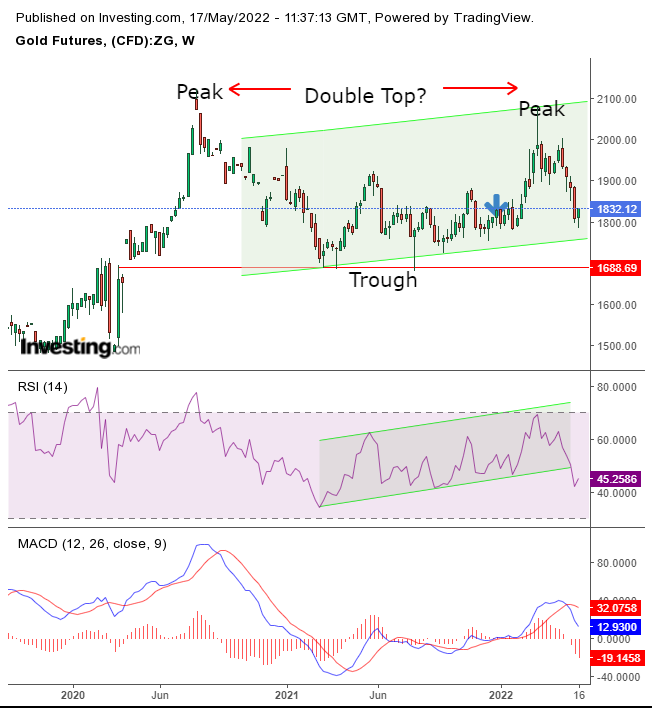 There are two primary technical forces. One is driven by a rising demand for the yellow metal amid the worst inflation in over four decades, with concerns that the Fed interest rate hikes will actually cause a recession. In this scenario, the precious metal is a hedge against inflation.

The other force is supply overcoming demand. Note that when the contract started falling, the March peak registered a lower high than the August 2020 record peak, suggesting that bears are in charge. The long-term trend is still up, as determined by the direction of the peaks and troughs. Only a trough lower than the one in March will establish a downtrend.

A stricter interpretation will demand a minimum of two peaks and two troughs, independent of the uptrend.

Meanwhile, both the Relative Strength Index, measuring momentum, and the Moving Average Convergence Divergence, measuring pricing, have fallen below their supports, suggesting the rising channel will break, increasing the chances the price will fall below the March low, completing an oversized Double Top.

So, which trend will win?

We don't know. All traders can do is manage risk and trade according to their style. Aggressive traders can go long on the intra-weekly bullish hammer at the bottom of the rising channel, knowing it could backfire and fall as it completes a massive Double Top. To sort itself out, cautious traders can wait for the long-term trend—sideways now.

Conservative traders should wait with a long position for a peak above the record August 2020 high or for a new low to short the commodity.

Moderate traders could go long if the daily chart posts a series of rising peaks and troughs to synchronize with the weekly rising trend.

Aggressive traders can enter a long position, counting on the rising channel and the weekly hammer, though the candle's bullish call will go into effect only after the weekly close.

Since trading is nothing more than "luck management," instead of knowing the future, money management is the key to success. Here is an example: