In Tuesday's post I outlined how institutional investors are rerouting funds from Alibaba (NYSE: BABA ) to Amazon (NASDAQ: AMZN ), and I suggested it might be due to the regulatory environment.

Amazon is under the regulatory gun again. The world's second-largest retailer has been mounting a counter-attack, accusing the Federal Trade Commission (FTC) of a "burdensome" investigation harassing its senior executives, including Jeff Bezos. My only observation is that I do not know of any company that is happy to be investigated.

The FTC is targeting Prime, as it is concerned that Amazon is using unethical practices to manipulate users to commit to unneeded services and to prevent them from canceling them.

Understandably, the online behemoth is concerned, as Prime is a critical component of its business, creating a long-term funnel of loyal (or captive, as the FTC may be thinking) customers.

Could the FTC investigation unravel one of the drivers that have enabled Amazon to dominate eCommerce in recent years? 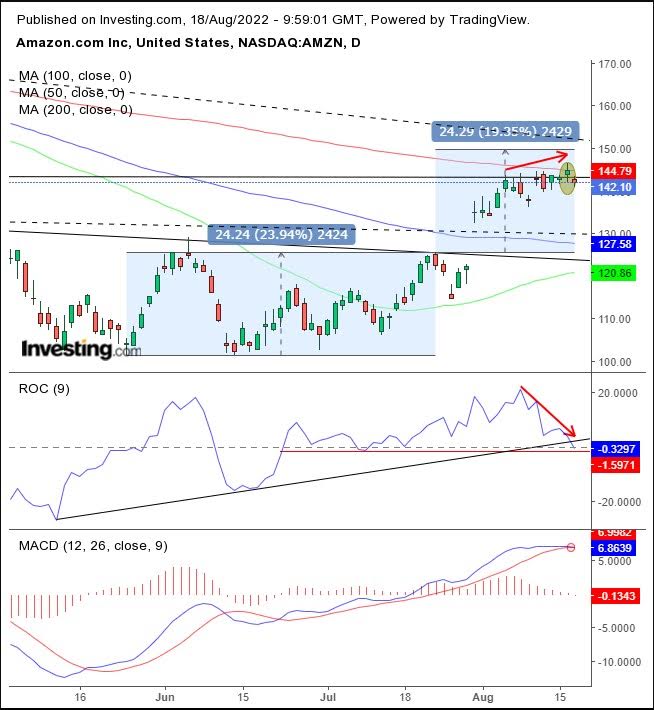 The price has been churning since August 4, which coincides with an interpretive neckline of an H&S top. Wednesday was the one day that the price peeked and may have peaked. Note that the price penetrated above the 200 DMA but only on an intraday basis. Alas, the price closed precisely below the major MA.

Some might argue that the last three trading days formed an Evening Star. Purists may insist that the second candle is too small, and the pattern requires a long red candle. That does not concern me. The fact that yesterday's decline retreated from Monday's advance matters. Monday's candle wasn't long, as well. So, how meaningful is Thursday's retreat? What I am concerned about is the preceding sideways move. I would be more impressed with an Evening Star that follows a sharp rally, assigning the reversal significantly more potency.

Still, the inability to remain above the 200 DMA, coinciding with a possible H&S neckline, nearing the bottom's implied target, and the nearing falling trendline, does make a compelling case that supply is charging up. The price's inability to maintain an advance after news of institutional money buying into Amazon suggests that demand has run out and is a bearish sign. Additionally, the ROC, which measures momentum, fell in contrast to the rising price, triggering a negative divergence.

When momentum does not support the price, it's set up for a decline, as the stock was rising on fumes. Unless it gets a fresh boost, it will run out of steam and likely drop. Furthermore, the indicator fell below its uptrend line since the May low, when the bottom began ranging, suggesting it will keep falling. If the ROC falls below its lows since June, it will indicate that that momentum topped out, which could lead the price to do the same.

Even the MACD, a lagging indicator that compares different price averages, triggered a sell signal as the long MA fell below the short MA, showing that current pricing is weakening.

Conservative traders should wait with a short for this week's close to confirm last week's hanging man and this week's shooting star, then for bulls to retest bears' resolve with another rally that fizzles.

Moderate traders would also wait for this week's pricing to solidify a bearish stance, then wait for a return move to reduce exposure, if not seek confirmation, before committing to a short position.

Aggressive traders could short upon this week's confirmation as described, provided they can withstand whipsaw.

The more aggressive the position, the more critical a coherent plan addresses your timing, budget, and temperament. If you don't yet know how to write one, you may practice with a generic sample: