Imagine if Coca-Cola's (NYSE: KO ) secret recipe got out, allowing others to begin selling the most consumed soda in the world. Might that impact Coca-Cola's business?

Some of China's biggest tech companies were forced to share their algorithms with Beijing amid a crackdown on data abuse, potentially compromising closely guarded secrets. Many consider these algorithms a crucial component in what makes these companies successful. In recent years privacy issues have been at the heart of political controversies worldwide. So far, big tech companies in the West have kept regulators at bay, arguing their algorithms were trade secrets.

Moreover, the Chinese economy has been showing signs of cooling in the aftermath of its Zero-COVID policy. Retail sales grew 2.7% annually, almost half of the expected 5% forecast and industrial production rose by 3.8%, well below the 4.6% estimate and even last month's 3.9%.

The PBOC thought these figures were worrying and cut interest rates while other major central banks were raising them. This move surprised markets after policymakers resisted lowering borrowing costs after the country's economy stalled in the previous quarter amid the risk of rising debt, consumer inflation, and pressure on its currency.

Softbank (TYO: 9984 ) also showed it had no confidence in China's economy and sold off its Alibaba (NYSE: BABA ) shares, cutting its stake from 23.6% to 14.6%. This divestment is noteworthy, considering SoftBank's CEO Masayoshi Son has been famously fiercely bullish on China and unwinding the Japanese conglomerate's most famous investment. One of his best bets is a red flag.

Another institutional investor that dumped Alibaba is Bridgewater Associates, the world's largest hedge fund. Interestingly enough, Bridgewater shored up its positions in Amazon (NASDAQ: AMZN ), Meta Platforms (NASDAQ: META ), and Alphabet (NASDAQ: GOOGL )—companies that have been able to retain their algorithms a secret. 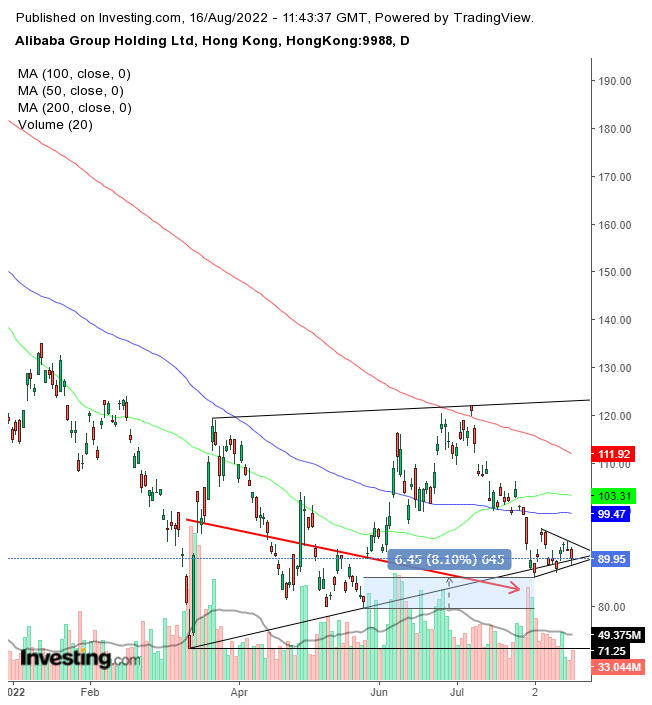 Alibaba may have been developing a rising wedge. The pattern of highs and lows point in the same direction, while the lows gain on the highs. While the March 15 to May 26 troughs gained 14.24%, the March 23 high to the July 8 peak gained a paltry 2.2%.

Again, the price rose 8.1% between the May 26 and August 2 lows. We're seeing a pattern in which, despite buyers' willingness to buy at ever-increasing prices, they are not seeing any progress in highs. The assumption is that bulls will give up and liquidate, allowing bears to break the range to the downside.

This disappointment is why the rising wedge disrupts a downtrend, and technicians expect them to break in the same direction as the existing trend. Notice how the 200 DMA hit the price back down from the structure's top to below the 50 and 100 DMAs. Let's observe the volume behavior during this range. Spikes have been declining with each gain in the price (red arrow).

Since the beginning of the month, the price has been ranging in a pennant formation. Also, a presumed, albeit smaller, continuation pattern. Bears need to catch their breath after a near-19% plunge in the six sessions that precede the pennant. The lucky bears can't believe their windfall and lock-in profits before it bounces back. However, if the price breaks to the downside, it will demonstrate that the only reason the price ranges this month is that the demand came from bears covering shorts, not because of bulls increasing positions. That realization is expected to pull all the bears back in.

It's essential to understand how everything ties in on the chart. Note that the pennant develops on the very bottom of the rising wedge. The larger pattern provides the smaller pattern support, even as the pennant acts as a market slingshot to break through the wedge's floor.

Conservative traders should wait for both patterns to complete, which will be simultaneous, then wait for the return move to verify the downtrend.

Moderate traders could wait for the same downside breakout and return move to reduce exposure, if not confirm resistance.

Aggressive traders can short upon the downside breakout according to a trading plan that incorporates your timing, budget, and temperament. If you don't know how to do that, here's a generic sample just for practice.