The Japanese economy has been battling deflation for over two decades. Deflation is when the costs of goods and services in an economy are falling. While that may appear positive to consumers, it is in reality financially inviable. Falling prices means corporates reduce activities as they don't want to produce goods at low margins. This translates into falling employment and wages.

However, after battling deflation, Japan is now under the gun of inflation. While a tempered rise in prices could benefit the economy—as businesses increased profitability encourages expansion, leading to job creation and rising wages—prices rising too fast would chip away at the yen’s buying power, which would lower consumer and investment spending.

Japan’s wholesale inflation soared to the highest in 13 years, which puts a strain on manufacturers, already suffering from supply shortages, exacerbating the challenges of low domestic consumption.

Let’s see how this translates into the supply and demand as seen on the charts. 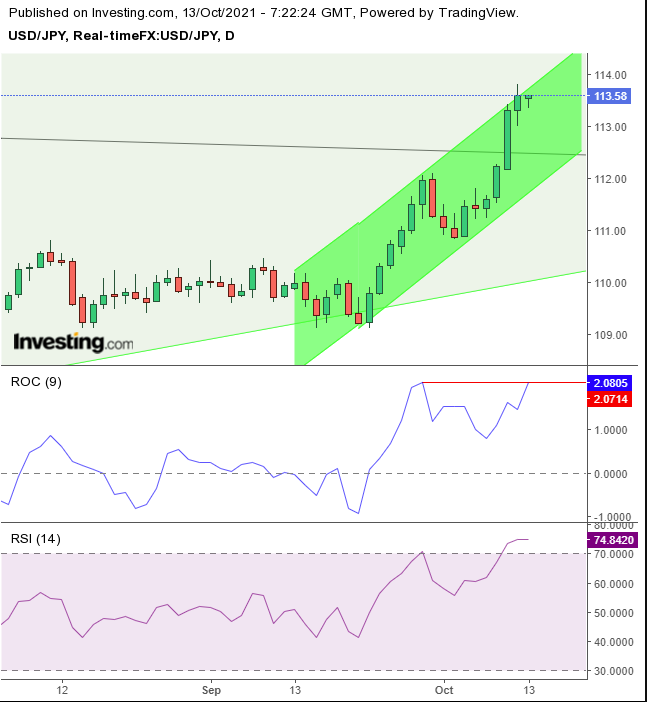 The dollar has reached the top of its rising channel versus the yen, increasing the chances of a pullback, as momentum-based indicators imply. The ROC has stopped at its previous high, unable to keep up with a higher peak in the price. The RSI reached 74.84, the most overbought condition since April, and flattened.

Although today’s trading rebounded from the first decline in five sessions, the price is flat with yesterday’s closing. Moreover, the trading pattern developed a potential hanging man. Today’s rebound may have lured bulls into expectations of a continued straight line up for the price, but a close tomorrow below today’s opening price may cause a panicked short squeeze, priming that correction to the bottom of the channel. 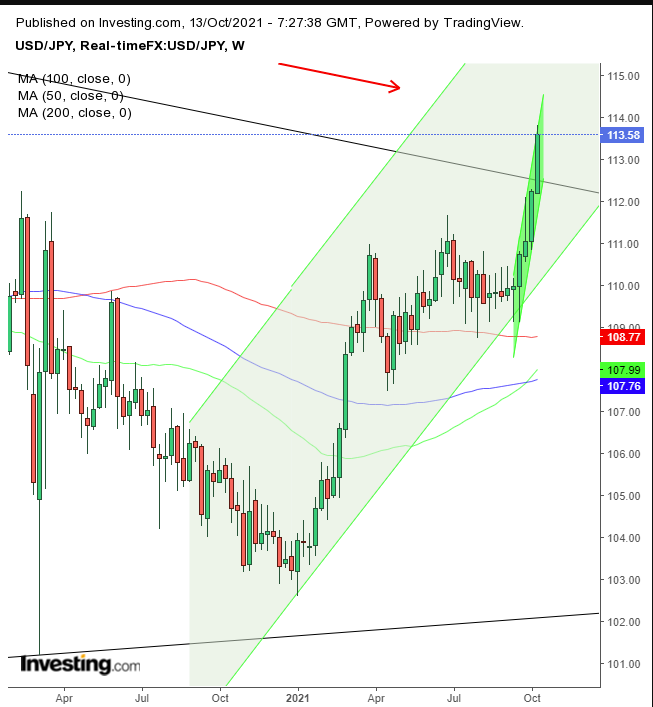 In the weekly chart, we discover that the dollar-yen has been on the rise for the sixth straight week, the most since December 2016, when the Trump Trade took the markets by storm. Here we see the 50-DMA has crossed the 100-DMA, heading toward the 200-DMA—which has been providing a neckline for a failed H&S top, whose blowout provided the technical fuel for the pair to surge 3.5% in the current rally. 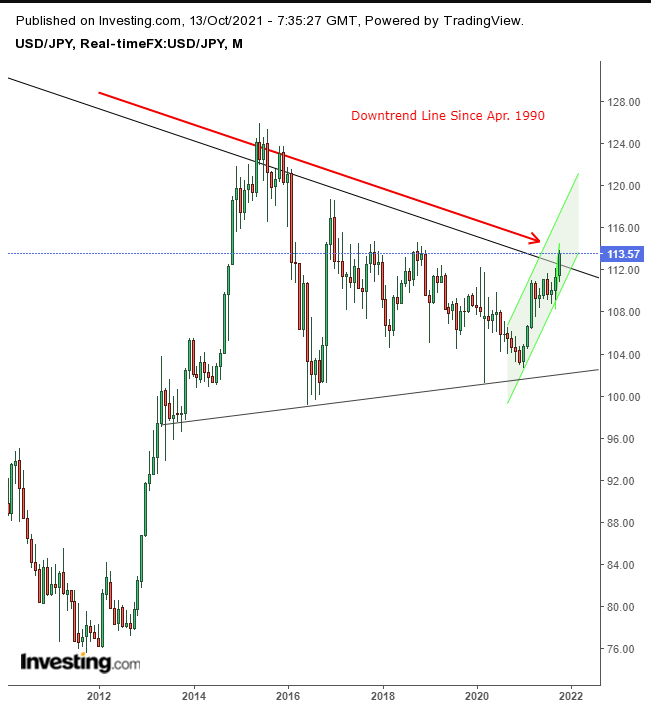 The monthly chart shows that the current advance has cut through the macro downtrend line for a second time since the 1990 peak—the first time being in 2015. The price action developed since formed a symmetrical triangle, whose top is made up of the 31 year-long downtrend line, underscoring its significance as a technical pressure point. Given that the triangle is an interruption in an underlying uptrend since the 2011 bottom, the odds are in favor of an upside breakout.

In summary, while in the short-term the USD/JPY has room for a corrective dip, its medium-to-long-term is up and is testing the secular downtrend.

Conservative traders should wait for the pair to fall back to the bottom of the rising channel and demonstrate trend integrity with accumulation.

Moderate traders would also wait for the dip, for an entry close to the support of the channel bottom, if not for added confirmation in the rally.

Aggressive traders could enter a contrarian short position, provided they accept the higher risk that goes along with the higher returns that come with beating other traders to the punch. The higher risk demands a careful trade plan. Here are the salient points of one: