Based upon the company's guidance for fiscal 2022 (ending July), Cisco Systems (NASDAQ: CSCO ) stock trades at 13x earnings. That's an exceptionally low multiple for a tech company—or any company, for that matter. 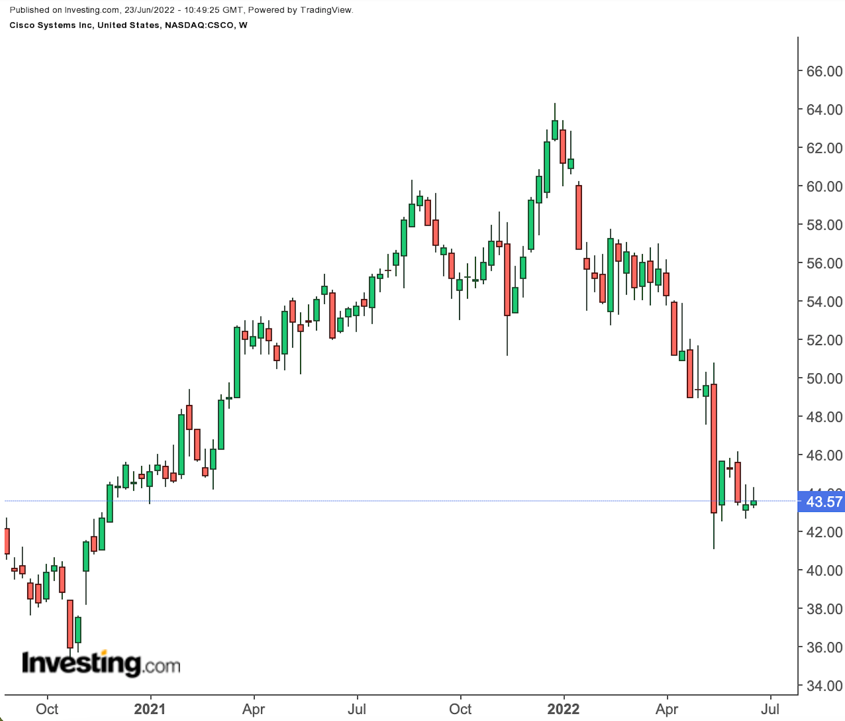 Indeed, 13x earnings is a multiple that implies essentially zero growth going forward. Add in a 3.5% dividend yield and Cisco stock looks a steal after declining a surprising 31% so far this year.

A Lack of Growth

At the midpoint of that range, Cisco should increase profit by just 7.4% over the three-year period, or a 2.4% annualized rate. Still, the company is driving at least some growth—and perhaps a bit more than the stock is pricing in.

But almost all of that growth in EPS is coming from the 'S', not the 'E'. Like many mature companies, Cisco continues to buy back stock. Its diluted share count should be more than 6% lower in FY22 than in FY19. Adjusted net income for the company as a whole was $13.8 billion in FY19—and at the midpoint of guidance will be quite close to that figure in the current fiscal year.

Cisco earnings haven't grown—and so the Cisco share price hasn't grown. Since the beginning of 2019, CSCO has gained less than 1%. The NASDAQ 100 , an index of which Cisco is a member, has rallied 82%.

And so the approach to CSCO can't be to ask, “Why is this stock so cheap?” The answer to that question is quite simple. Earnings aren't growing, in large part because Cisco's legacy end markets aren't growing.

Indeed, as much as CSCO has struggled, major rival Juniper Networks (NYSE: JNPR ) has done even worse. That stock trades barely above where it did in early 2014, and has gained less than 5% since the start of 2019. Elsewhere in computer hardware, a stock like Hewlett Packard Enterprise (NYSE: HPE ) trades for less than 7x forward earnings.

Hardware simply is a tough business, particularly as workloads continue to migrate to the cloud. Just because Cisco is the biggest player in hardware doesn't mean it's immune to that problem.

As a result, the key question for Cisco stock is “How does the stock stop being so cheap?” The answer to that question too is quite simple: the company needs to jumpstart growth. But a simple answer is not the same as an easy answer.

Pivoting Away From Hardware

We know hardware is a difficult business because Cisco itself is trying to pivot away from that business toward faster-growing, more consistent, and higher-margin software and subscription revenue. In Q3, according to the post-earnings conference call, 43% of total revenue now comes from subscriptions.

Much of that revenue came via acquisitions such as Cisco's $2.35 billion buy of Duo Security back in 2018. Earlier this year, the company reportedly made a $20 billion-plus offer for Splunk (NASDAQ: SPLK ).

For the moment, however, Cisco is doing more development internally. It has launched its Security Cloud, integrating cybersecurity with its legacy hardware offering. AppDynamics Cloud helps companies manage cloud infrastructure (aspects of which often are run in a highly compartmentalized manner, making it difficult to spot problems between them)

This strategy makes some sense. And to some degree, it worked—for a while. Somewhat quietly, CSCO was one of the better large-cap stocks of the pre-pandemic bull market, more than tripling between the second half of 2012 and the middle of 2019.

But it's not working now—or at least, not working well enough. In Q3, software revenue rose 2% even excluding impacts from the war in Ukraine (which led Cisco to exit operations in that country, along with Russia and Belarus) and a comparison against a fourteenth week in the prior-year quarter. Subscription revenue as a whole rose 3% on the same basis.

That kind of growth isn't good enough. Younger, nimbler cybersecurity companies in particular are increasing sales at a far faster clip. CrowdStrike (NASDAQ: CRWD ), for instance, expects revenue to grow more than 50% this year. Cisco has to do better.

The Case for Cisco Stock

To be fair, perhaps Cisco will do better. After Q3, chief executive officer Chuck Robbins was adamant that his company wasn't facing a demand problem—but a supply problem. Components are in short supply. Container ships are backed up. Air freight capacity is limited.

To be sure, Wall Street was not all that receptive to that explanation; much of the Q&A on that call seemed to consist of analysts trying to poke holes in the theory. But this is at the very least an abnormal environment, and it may be unfair to compare fiscal 2022 to the far calmer fiscal 2019.

The flipside, however, is that IT demand soared during the pandemic—because it had to. The rise of remote work and the rush into e-commerce by so many brick-and-mortar companies required significant spending on infrastructure upgrades—spending that boosted profits across the industry. Yet Cisco really wasn't able to take advantage of that demand and significantly grow profits.

That in turn colors the outlook going forward. The operating environment of the past few years had a good number of challenges—but plenty of positives as well. Net/net, it did little for Cisco's bottom line. Somehow, someway, that needs to change for CSCO stock to rally again. The market is skeptical that it will—and seemingly rightly so.

Disclaimer: As of this writing, Vince Martin has no positions in any securities mentioned.

Looking to get up to speed on your next idea? With InvestingPro+, you can find: