Gold prices are the cusp of a breakout or stalling at the low $1,800s this week, depending on U.S. inflation data and a speech by Federal Reserve Chair Jay Powell that could set the tone for longs trying to find their feet after last week’s shake-up in the yellow metal.

Crude markets are at an inflection point too, with Brent hitting $60 per barrel and U.S. West Texas Intermediate in hot pursuit of a new one-year highs, prompting the recurring question: Is oil overbought at this level? Or could it continue climbing? 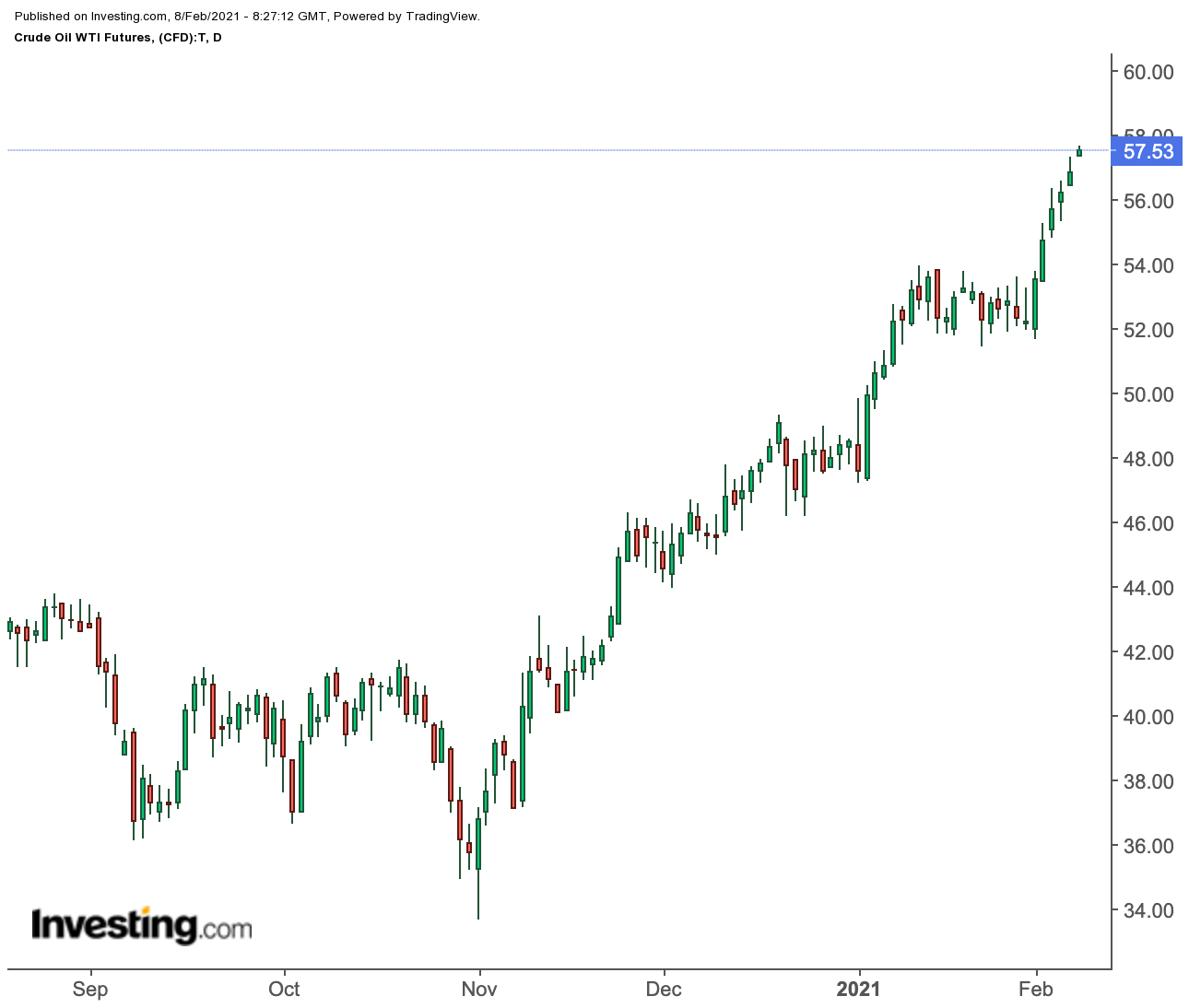 More on that debate below, but first, let’s get to gold.

On Wednesday, market watchers will be paying close attention to U.S. Consumer Price Index data for January, amid growing expectations that an uptick in inflation could be larger and longer lasting than the Fed is anticipating. Also on tap will be wholesale inventories .

U.S. Treasury investors are betting that inflation will rise if the economy continues to progress in the second half of this year, after contracting in 2020 at its deepest pace since World War II. The prospect of a new coronavirus relief package is adding to inflation expectations.

Wednesday is a packed day as Fed Chair Powell will also be speaking about the labor market at a webinar hosted by the Economic Club of New York. Later that evening, the U.S. Federal Budget Balance will be published, while on Thursday, initial jobless claims numbers will be released.

Any of these data releases, along with Powell’s speech, could determine the direction and velocity for gold this week, as well whether the Dollar Index and U.S. 10-year Treasury yields will continue to trend higher.

Last week, benchmark gold futures for April delivery on New York’s COMEX lost 2% and tumbled to a 10-week low beneath $1,785 an ounce. 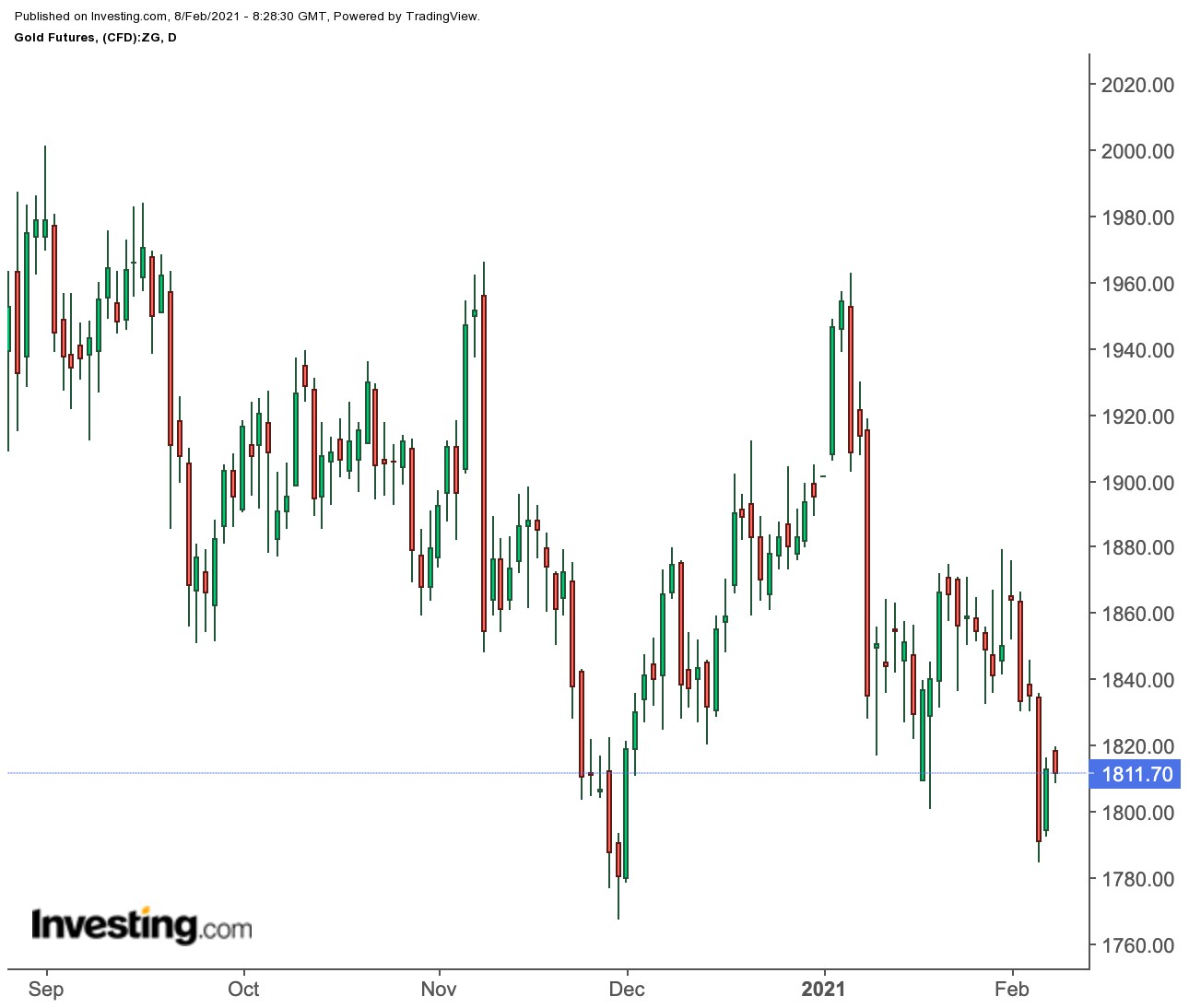 The correction in gold came after the dollar and yields broke higher on a combination of upbeat jobless claims and ISM non-manufacturing PMI data.

While the yellow metal managed to regain its $1,800 berth before the week ended, its immediate upside appears tenuous.

The path forward for gold is mired in uncertainty and much of this has yet to do with the overlapping outlook for yields as well as inflation. Yields hit a new 11-month high of 1.191 on Monday.

Economics 101: Spiking yields make gold, a non-yielding asset, attractive. Yet, if economic recovery outperforms Fed expectations, then inflation, a gold-booster, will kick in. The Fed has no immediate plans to raise interest rates, which have been at near zero since the COVID-19 pandemic outbreak began almost a year ago.

The other big inflation juggernaut is the Biden administration’s $1.9 trillion fiscal stimulus bill. If it is passed in one go or in instalments—senior Democrats just added a $3,000 single child relief on top $1,400 checks for individuals—it could go some way in adding immediate inflationary pressure that could lift gold.

Daniela Sabin Hathorn, in a blog on Daily FX, broke down the dilemma of forecasters in trying to envisage the probable path for inflation, which would be key for gold:

“Although expectations are for inflation to increase this year on the back of built-up demand, gold traders need to be prepared for the continuation of an environment of low inflation in the near future.”

Sunil Kumar Dixit of S.K. Dixit Charting in Kolkata, India, says April gold futures, hovering at $1,815 on Monday’s Asian trading, could near $1,870 at the peak. But he thinks that they could revisit last week’s lows and extend deeper than that if support fails to hold at $1,792.

On my end, Investing,com’s own Daily Technical Outlook for April gold maintains a “Strong Sell” signal. Yet, a modestly-evolving upside formation sets three immediate Fibonacci thresholds, first at $1,819.42, then $1,820.84 and finally $1,823.13.

Oil’s technical charts are also mixed. WTI’s RSI, or Relative Strength Indicator, keeps flashing red that it is overbought. Yet if the current upside momentum holds, it could persuade oil bulls to stay on track, regardless the chart signals.

Also, the hedge funds that often front run the trends in oil are wagering on the crude rally to continue.

Iran, meanwhile, has turned its oil spigots on in full as President Joseph Biden motions for a new U.S.-led nuclear deal for Tehran. U.S. Secretary of State Anthony Blinken has previously said he wants to see a significant retreat first in Iran’s uranium enrichment. But a presidential order isn’t one to be ignored.

An Iran deal could quickly put more barrels on the market than the Saudi-led and Russia-assisted OPEC+ alliance of oil producers would like. Interestingly, while Iran remains a key member of OPEC, it has been treated as a virtual outsider by the Saudis during the past three years of the “maximum pressure” campaign applied by the Trump administration on Tehran. Iran, therefore, owes nothing to the Saudis in helping keep in place OPEC’s output cuts deal that accounts for a $10-$15 premium in current oil prices.

Be that as it may, Iran is unlikely to be able to flood the world market with oil in the near term. Global inventories of oil have drawn down sharply in recent months, evidenced by the so-called backwardation in crude prices, where the spot contract trades at a premium to nearby months on the complex. And U.S. shale oil exports are still struggling to regain the momentum of higher output after months of rig additions. One key reason, there is no surplus of U.S. oil overfilling tanks now as roaring demand from China means it is importing almost all of that oil.

But Iran’s return to the market could still pose troubles for oil bulls. Iran’s production peaked at around 4.0 million bpd before the exports clampdown by President Trump. What’s important to note though is that the Mullahs do not have to put that much oil back on the market. The very announcement that nuclear talks with Iran are on could be a trigger for a near-term selloff in crude. How persistent the pressure will be depends on the timetable set for Iran’s ratification of U.S. conditions for its return to the market.

The oil rally has had few pauses since November. Often, a trigger is needed to set the market sharply back. Remember the tech stocks plunge in November amid the cyclical reset sparked by the breakthrough in vaccines? Oil needs something like that if its direction is to change. Iran could be it, or if not, something else.

Amid the overwhelmingly bullish voices now in oil, two stood out against the crowd in recent days.

Mike Muller, the head of Vitol’s Asian operations, said in an interview with Dubai-based consultant Gulf Intelligence that oil was “getting ahead of itself in terms of a post-vaccine euphoria,”

Gunvor Chief Executive Officer Torbjorn Tornqvist said on Friday he is skeptical, for now, of gains far beyond $60 a barrel because that might trigger an avalanche of shuttered supply.

As with all projections, we urge you to consider these, but to also use your own judgement—tempered with fundamentals and technicals—to proceed in the way that works best for you.

Disclaimer: Barani Krishnan does not own or hold a position in the commodities or securities he writes about. As an analyst for Investing.com he presents divergent views and market variables.

Comments are welcome and encouraged. Inappropriate comments will be reported and removed.