The reading on US consumer price inflation for August will likely set the tone for risk appetite across markets this week, with gold particularly cued in on the metals side.

On the energy front, investors and traders in oil will look out for the OPEC and IEA monthly updates to figure out supply-demand amid continued struggles with the Delta variant of COVID. 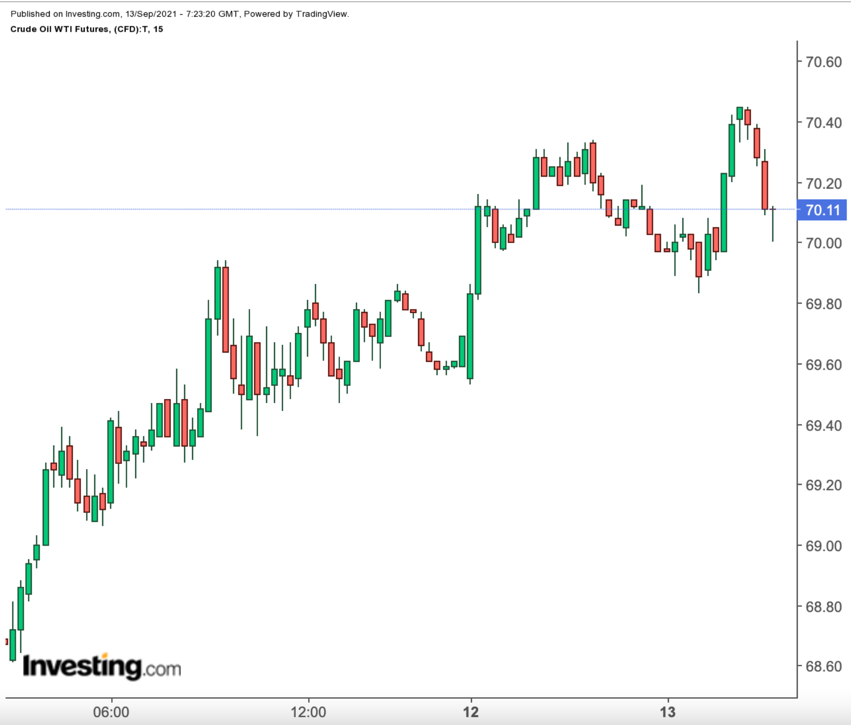 The August Consumer Price Index , or CPI, reading due on Tuesday, is at the forefront of this week’s markets economic calendar as economists grapple with the question of whether this year’s inflation spike will abate at all, as the Federal Reserve claims it will.

With the Fed entering its typical blackout period ahead of its Sept. 21-22 policy meeting, focus could be larger than usual on the August CPI numbers. When the US and other central banks choose to taper their economic stimulus is key to risk appetite across markets, with as many economists calling for a quick taper as those suggesting a gradual retreat.

US CPI growth slowed in July but remained at a 13-year high of 5.4%. For August, economists are expecting the advance to slow further to 5.3%.

US gold futures were a tad higher in Monday’s Asian trading as Treasury bond yields weakened from Friday’s close while the dollar remained steady. 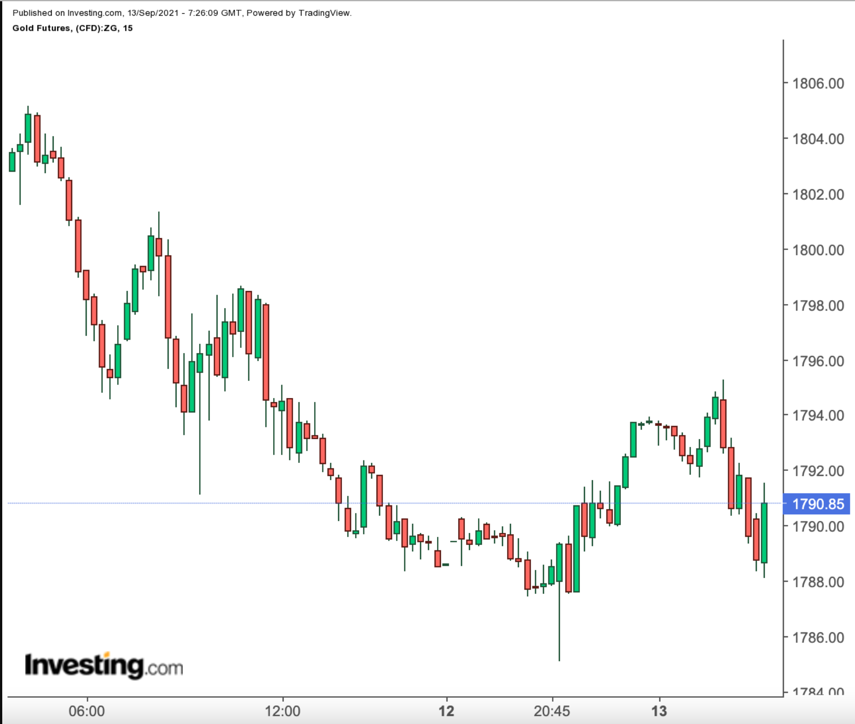 December gold fell 2.3% last week, sliding its most since the week to July 29, and booking its first weekly loss in five as brief euphoria for longs over the dismal US jobs report for August gave way to dismay as the dollar rebounded on talk of a prompt Fed taper.

Speculation that the central bank will be pressured to act quicker on inflation came as data showed US producer prices rising by 8.3% in August, their most in over a decade. Until the so-called PPI data emerged, the argument for a taper was, however, weakened considerably by the US jobs report for August, which came in at 70% below economists’ targets.

The question of when the Fed ought to taper its stimulus and raise interest rates has been hotly debated in recent months as economic recovery conflicts with a resurgence of the coronavirus’ Delta variant.

The Fed’s stimulus program and other monetary accommodation have been blamed for aggravating price pressures in the United States. The central bank has been buying $120 billion in bonds and other assets since the COVID-19 outbreak of March 2020 to support the economy. It has also been keeping interest rates at virtually zero levels for the past 18 months.

After declining 3.5% in 2020 from business shutdowns owing to COVID-19, the US economy expanded robustly this year, expanding 6.5% in the second quarter, in line with the Federal Reserve’s forecast.

The Fed’s problem, however, is inflation, which has been outpacing economic growth.

The Fed’s preferred gauge for inflation—the core Personal Consumption Expenditures Index, which excludes volatile food and energy prices—rose 3.6% in the year through July, its most since 1991. The PCE Index including energy and food rose 4.2% year-on-year.

The Fed’s own target for inflation is 2% per annum.

In oil, crude prices extended Friday’s rebound on concerns over the looming Tropical Storm Nicholas which churned through the Gulf of Mexico on Sunday before its expected landfall along the Texas shoreline by late Monday or early Tuesday.

Just two weeks ago, Hurricane Ida lashed coastal areas of neighboring Louisiana in a hit whose impact and fallout to the US oil industry. About three-quarters of the US Gulf's offshore oil production, or about 1.4 million barrels per day, has remained halted since late August—roughly equal to what OPEC member Nigeria produces.

Oil prices also maintained their upward trajectory on Monday ahead of the Organization of the Petroleum Exporting Countries’ monthly supply-demand report due at 8:30 AM ET (12:30 GMT). The OPEC report aside, the International Energy Agency, or IEA, representing consuming nations, is due to release its outlook on Tuesday.

“When one looks back at oil's price volatility over last week, what stands out is the short-term gnomes rush from one side of the range to the other on a daily basis. So, despite a lot of intra-day noise, prices really went nowhere last week.”

“It would not surprise me in the least if oil prices unwound their gains later today.”