Europe’s signaling of a likely ban on Russian oil could keep crude prices hovering above $100 a barrel this week. 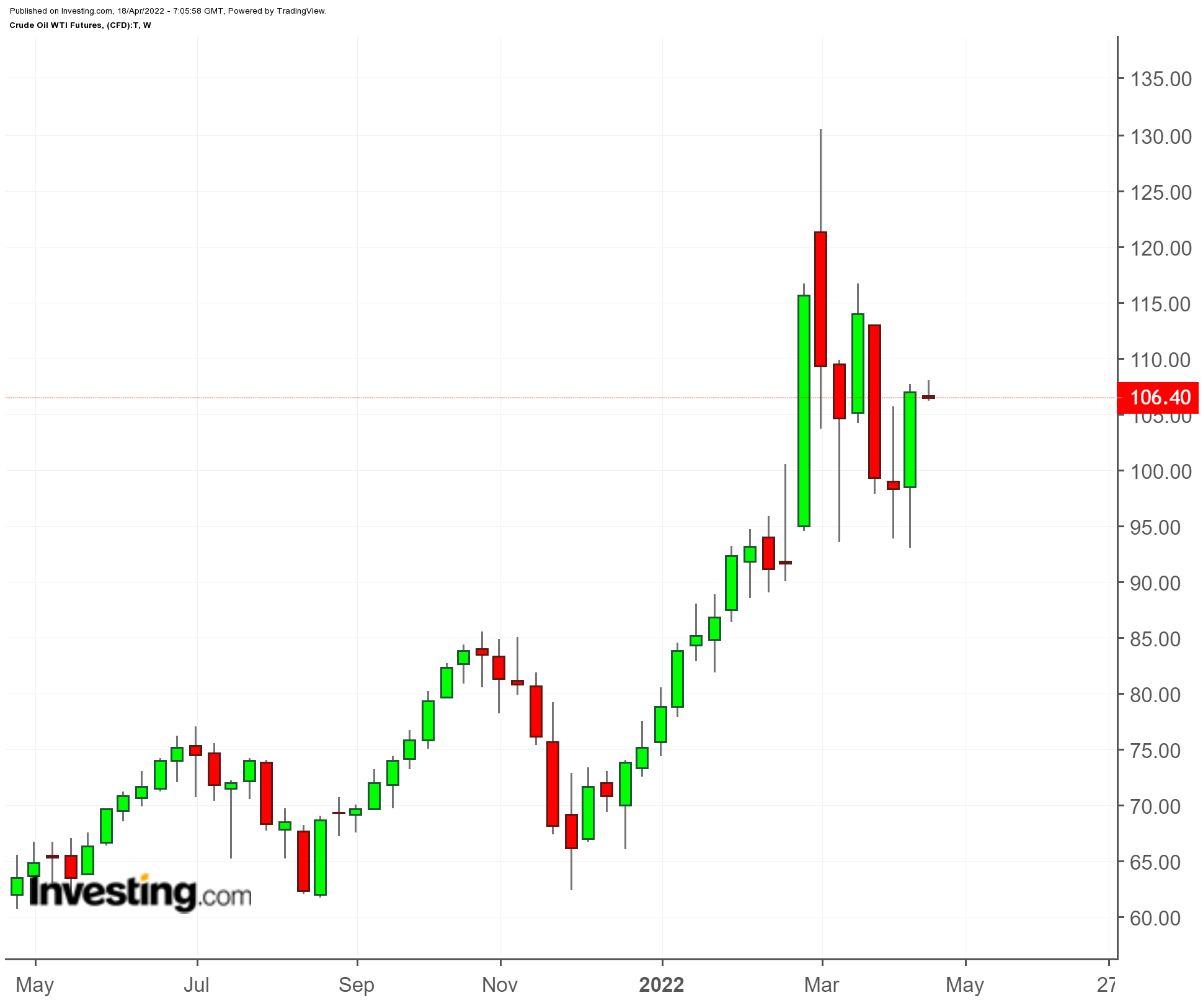 “Markets are already seeing the impact on production and trade from the Shanghai lockdowns, and if these start spreading, the picture for China dims considerably, even without the downstream impact from the Russian invasion of Ukraine.”

China’s gross domestic product expanded by an annual 4.8% in the first quarter, China’s National Bureau of Statistics said Monday, a faster pace than the 4% expansion recorded in the final three months of 2021 and the 4.6% expansion predicted by economists.

Even so, consumer sentiment has plummeted, production costs have risen, and COVID policies threaten to wreak havoc with production and logistics in the world's No. 2 economy. Eventually, all these will weigh on other Asian markets as well.

Data suggests that China started the year well, but as the quarter has moved on, the headwinds have gotten stronger. A slowing property market, sweeping COVID restrictions and the Ukraine invasion are all pushing up base commodity and energy prices.

Beijing’s central bank, meanwhile, is still intent on deleveraging sectors of the economy, adding to the weight on China's growth. “About the only thing missing is a meaningful rise in inflation, which is some small sliver of comfort,” said Halley.

Balancing these concerns on the positive were, of course, signs of the European Union coming under increasing pressure by the day to toughen sanctions that will particularly hit oil and gas this time amid the deepening crisis in Ukraine.

"The oil market will likely stay on a bullish trend this week with limited additional supply coming from major oil producers to offset a reduced flow from Russia," Kazuhiko Saito, chief analyst at Fujitomi Securities Co Ltd, said in comments carried by Reuters. He added:

"Soaring US heating oil prices were also behind the recent rally as expectations grew that (the) US petroleum market would get tighter due to increasing demand to export to Europe."

But those comments came before tensions grew in the Ukraine crisis over the weekend, with Ukrainian soldiers resisting a Russian ultimatum to lay down arms on Sunday in the pulverized port of Mariupol.

Moscow, which calls its actions in Ukraine a "special operation," said its forces had almost completely seized the city, providing no signs of a ceasefire.

The International Energy Agency had warned that roughly 3 million barrels daily of Russian oil could be shut in from May onwards due to sanctions, or buyers voluntarily shunning Russian cargoes.

Russian oil production has continued to slide in April, declining by 7.5% in the first half of the month from March, the Interfax news agency reported on Friday. 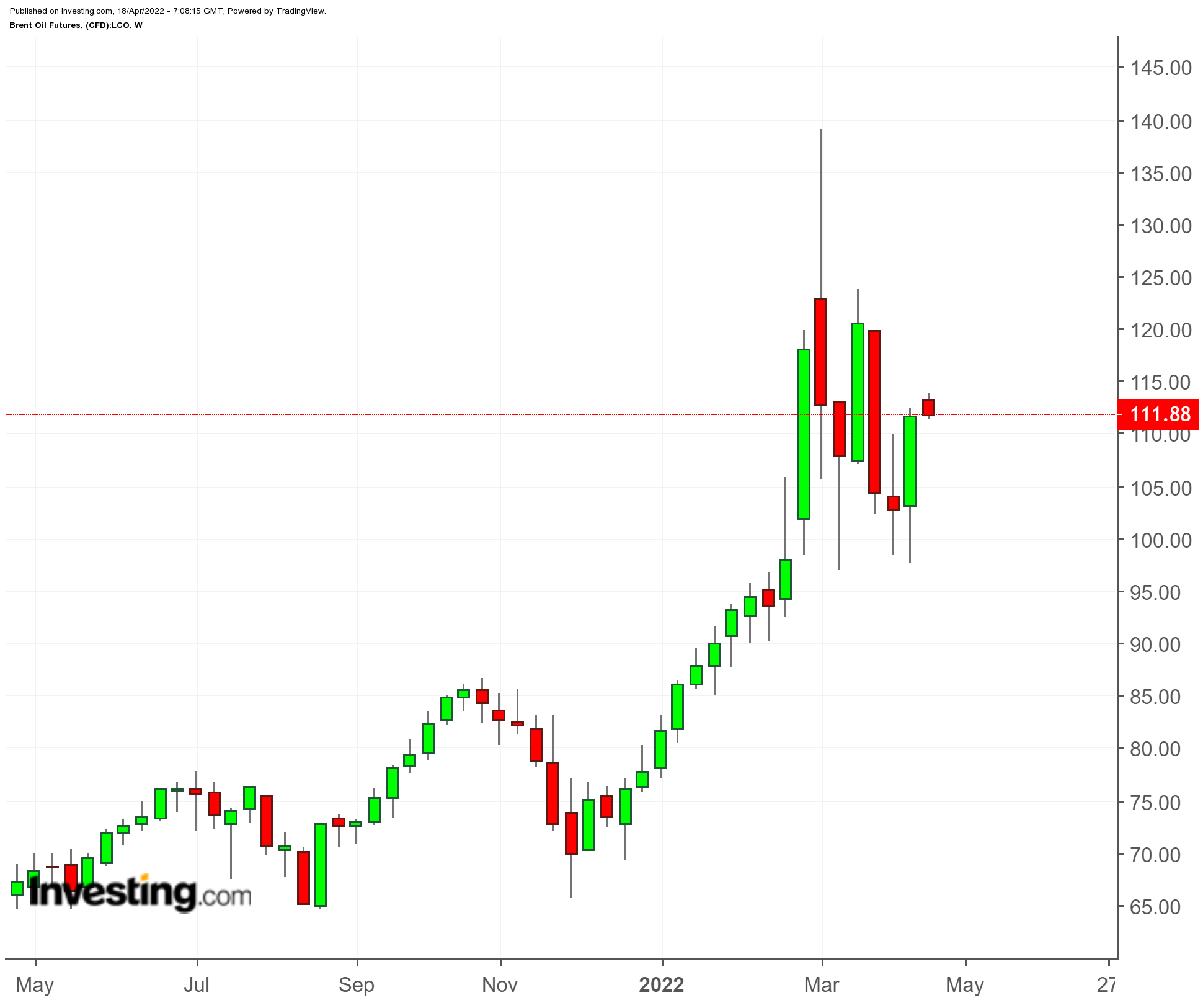 Ahead of the Good Friday holiday, Brent settled Thursday’s trade at $111.70, rising 8.7% on the week, after back-to-back losses that left it down 13% over two previous weeks.

The US crude benchmark could extend its upside to $119 in the week ahead if its momentum is unbroken, said Sunil Kumar Dixit, chief technical strategist at skcharting.com.

“WTI gained a whopping $14 from the previous lows of $92.90,” Dixit noted, adding that its bullish momentum was further established by an RSI, or Relative Strength Indicator, reading of 62 and stochastics at 55/48.

On the flip side though, a run below $105 could spell trouble for US crude.

Traders in gold and other safe-havens are awaiting comments due Thursday from Federal Reserve Chair Jerome Powell at what would be his final public appearance before the central bank’s May 3-4 interest rate decision. 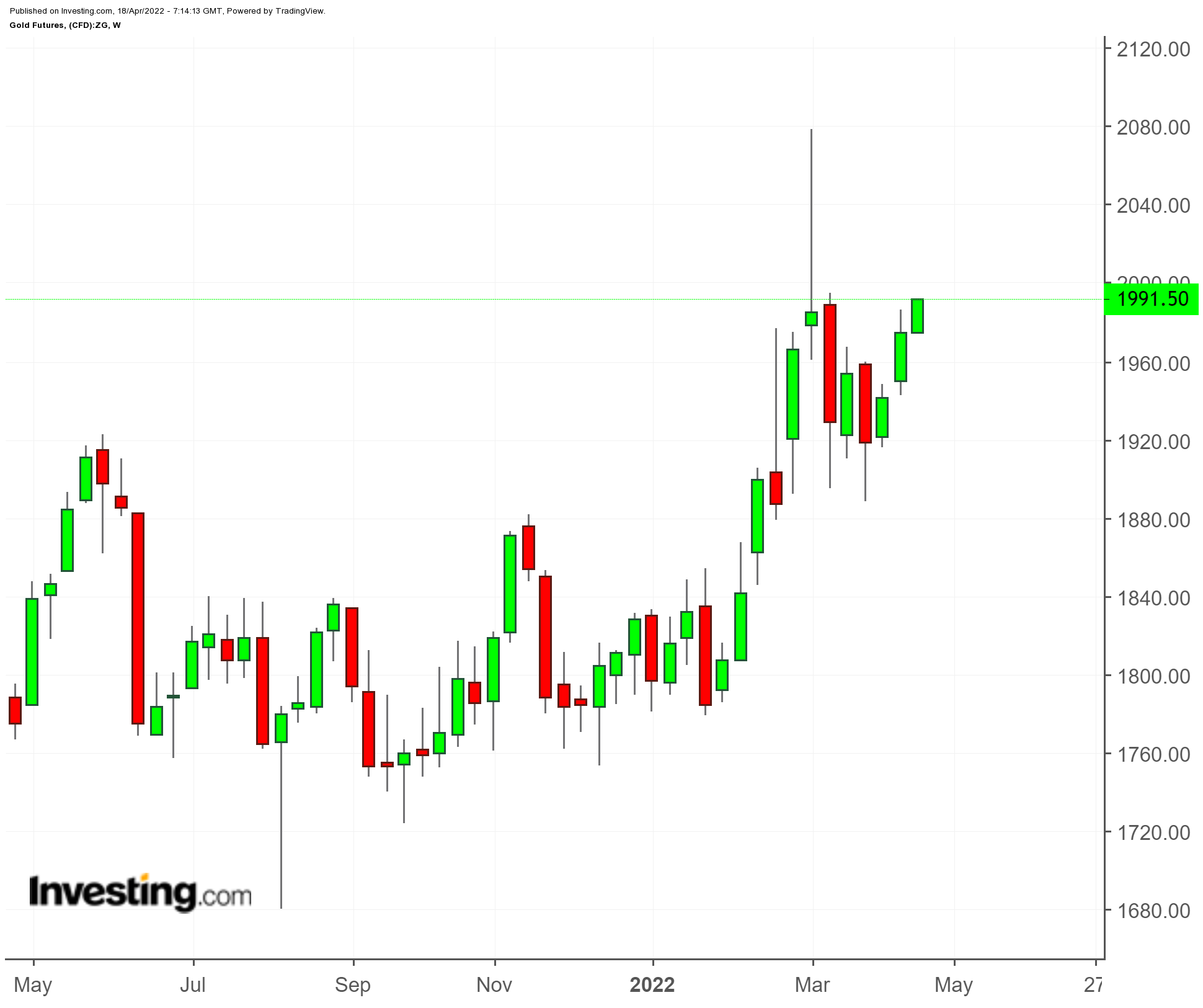 Powell is to speak at the spring meeting of the International Monetary Fund on Thursday and later in the day he is due to take part in a panel discussion on the global economy along with European Central Bank President Christine Lagarde and other central bank policymakers.

The Fed hiked rates by a quarter percentage point at its March meeting and since then has flagged another half-point move in May.

Many Wall Street analysts and investors believe the Fed has not moved quickly enough to combat high inflation and are now anticipating more aggressive rate hikes as the central bank catches up.

Data last week showed the US Consumer Price Index rose 8.5% in the year to March, the fastest annual increase since 1981.

Adding to the hawkish tone was the FOMC's meeting minutes from March, released on Wednesday, that said most members of the committee were agreeable to having “one or two” 50 basis point hikes in coming meetings.

Following that, the Fed’s most hawkish policymaker, James Bullard, said rates must breach the central bank’s typical target and go as high as 3.5% later this year in order to suppress inflation growing at twice that pace.

“I would like to see the Fed Funds Rate rise to 3.5% in the second half of 2022,” Bullard, who is St. Louis Fed President, said in comments made on Thursday.

After slashing rates to nearly zero at the height of the COVID-19 outbreak, the Fed’s policy-making Federal Open Market Committee, or FOMC, approved the first pandemic-era rate hike on Mar. 16, raising rates by 25 basis points, or a quarter point.

Many FOMC members have concluded since that the hike was too tame to rein in inflation galloping at 40-year highs and that more aggressive increases of 50 basis points may be needed in the future. The central bank is also considering as many as seven rate adjustments in all this year.

Bullard said the Fed was behind in its fight against inflation and needs to raise rates another 3 percentage points before the year's end.

The pace he was suggesting implied that the Fed should embark on 50 basis point, or half-point increases, at each of its six remaining meetings for the year. The Fed’s typical target for inflation is just 2% a year.

Dixit of skcharting.com, who tracks the spot price of gold , said the week ahead suggests an inflection point for the yellow metal.

But the weaker close on Thursday itself may cause some sideways action too, he cautioned.

“When the market reopens for Monday’s Asian and European sessions, there could be a downward move to retest $1,959 that can trigger a short-term correction to $1,932.”

Failure to hold above $1,932 could push gold further down, toward $1,890, especially in an environment of surging US bond yields, he added.

“Traders need to be watchful about the 10-year and 30-year note yields running to multi-year highs on recession concerns,” Dixit said. “These yields are like double-edged swords that can be both beneficial and destructive to gold, as they spur more inflation-hedging until the dollar starts surging to trigger sell-offs.”