Oil and gold could trade in a range, with intermittent volatility, in what is set to be a lightweight week for US data, as the Federal Reserve holds to a blackout on comments ahead of its July 27 rate decision . 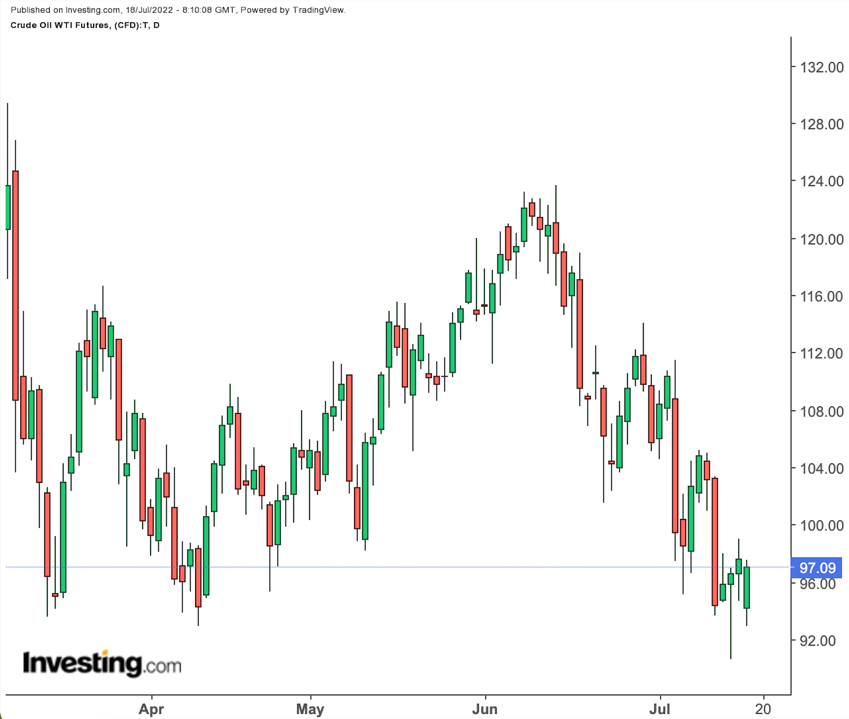 Futures of both US crude and bullion fell in five of the past six weeks as the dollar pushed to two-decade highs. 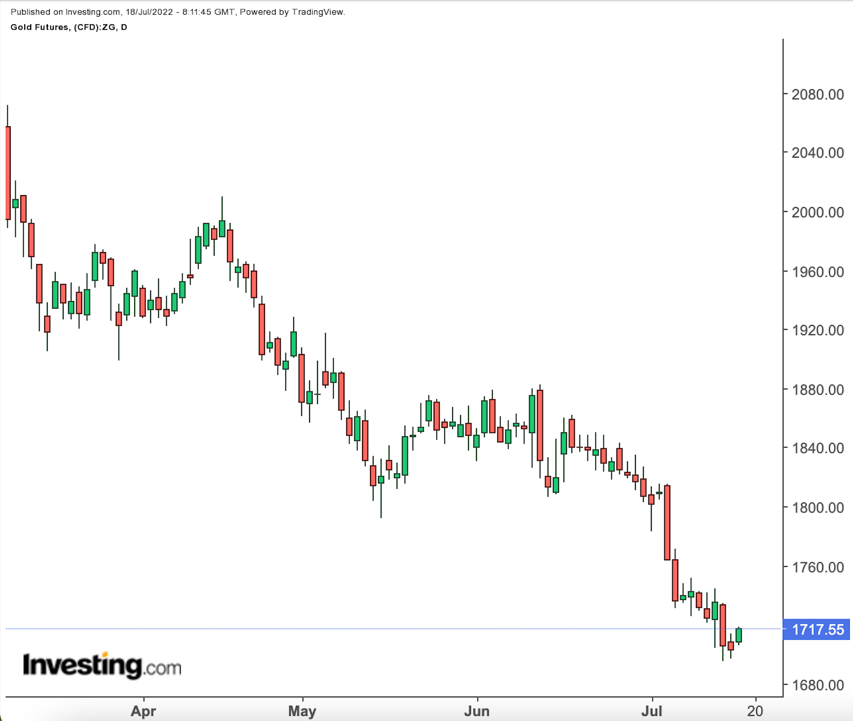 The greenback lost some of its momentum as a new week began in Asia, amid skepticism about a record 100-basis-point rate hike by the Fed when it meets. The central bank needs to bring annual inflation —which hit four-decade highs of 9.1% in June—to its target of just 2%.

“Despite the ructions in the speculative futures markets, the real-world dynamic remains as supportive of oil prices as ever. If Russia doesn’t switch gas exports back on to Europe at the end of the week, Brent crude could once again, find itself back near $110.00 a barrel.”

Amid heightened volatility ahead, WTI’s sustained move away from the just-ended week’s lows of $90.58 to hold at above $92 can push it towards the Daily Middle Bollinger Band of $104.30, said Sunil Kumar Dixit, chief technical strategist at skcharting.com.

One reason for oil’s plunge has been the White House’s increased jawboning over oil companies’ and oil producers’ roles in inflation and increased fears of a recession.

Whether Biden got any immediate gains from the politically risky visit remains to be seen. The price of oil poses a real catch-22 for the president, central banks, and the wider economy—a sustained drop in the price of crude and subsequently gasoline would take off a great deal of inflation pressure, but also may signal that a recession is here, which brings its own economic and political challenges.

Strategically, even if the Saudis raise production slightly in the coming weeks—after the additional 650,000 bpd a month that OPEC+ has already committed for July and August—it’s a win of sorts for the White House.

With the Biden visit, it’s looking increasingly likely that Saudi oil policy towards the administration will not be as toxic as before. This is in spite of the president reminding MbS on Friday that he held him responsible for Khashoggi’s death, to which the monarch responded by releasing pictures of the two of them smiling and chatting.

To MbS, it is most important to show the world that Biden acknowledged him as the next Saudi king and that the president recognized Riyadh as holding the levers to the world’s oil. In Biden’s case, he wanted to tell MbS in person who he really thought he was. In that sense, both got what they wanted.

The US gold benchmark has fallen for five straight weeks now, losing a cumulative 9%. Year-to-date, it is down 7%.

Since the Consumer Price Index for the year to June came in on Wednesday at a new four-decade high of 9.1%, bets on rates have been volatile—with the pendulum swinging between an unprecedented increase of 100 basis points for July versus the broader consensus for a 75 basis point hike.

“Risky assets have been beaten up enough and could be ready for a bounce here,” said Ed Moya, analyst at online trading platform OANDA.

“The precious metal is still vulnerable to further technical selling.”