Last week was oil’s worst since April 2020 and a new marker in the history books of crude trading. However, it is unclear where the market’s headed in the coming days. 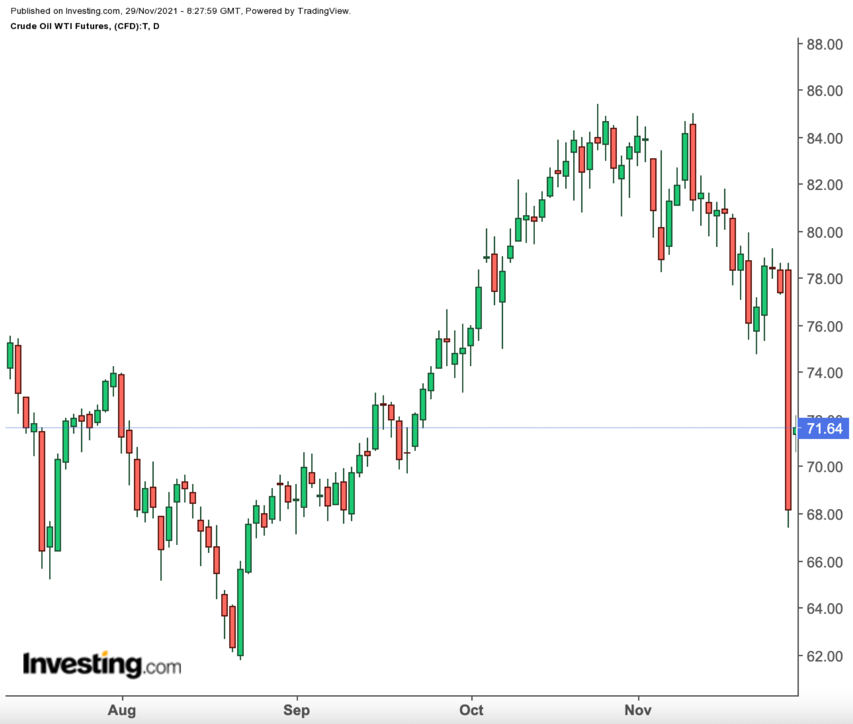 That answer can only be told with accuracy when the extent of infections, hospitalizations and fatalities from the coronavirus' new Omicron wave are known. That may seem obvious.

But for markets and decision makers pressing for information that flows by the nanoseconds, being ahead of every twist and turn in the new round of the pandemic will be as important as dealing with its aftereffects.

Anyone in doubt should take their cue from oil producing alliance OPEC+, which has delayed by 48 hours two technical meetings scheduled for Monday and Tuesday, ahead of the all-important meeting of its ministers led by Saudi Arabia’s Abdulaziz bin Salman and Russia’s Alexander Novak.

“This is in order to allow more time to assess the market in light of the new COVID-19 variant concerns,”  Eamonn Sheridan of ForexLive said.

At the time of writing, US crude’s West Texas Intermediate benchmark was up 4.5% to $71.22 per barrel, recouping virtually half of the 11% plunge on Friday that marked the sharpest one day loss since the first major COVID outbreak of nearly two years ago.

For many oil bulls, the nascent recovery after last week’s plunge would have resulted in a whoop of joy.

The rebound came as investors looked for bargains after Friday's slump, amid speculation that OPEC+ may pause an output increase in response to the spread of Omicron.

“I can’t help but feel that Friday’s lows were probably the bargain of the year if you were an oil buyer, speculative or physical,” said Jeffrey Halley, head of Asian research at OANDA.

Phil Flynn, analyst at brokers Price Futures Group in Chicago, concurred with that view, describing WTI at $72 per barrel as already “cheap.”

“Price-wise for oil, this should be like a Black Friday Discount sale,” Flynn wrote in a commentary ahead of the weekend.

“If I had an upside price risk I would use this break as a hedging opportunity,” he added.

“I cannot tell how bad this variant might be and whether it will lead to massive lockdown. Of course, if this variant does turn out to be a lot worse than the Delta variant, then all bets are off.”

Indeed, some think oil’s fallout from Omicron is far from over.

“China is not buying at these prices,” Madani added.

“Bring it down some more and they definitely will. This Omicron strand will take up to two weeks to understand; after-which there’ll be expert consensus. There’s more downside coming in the meantime.”

COVID-19 is back on top of the agenda for investors amid fears that the new Omicron variant could stall the global economic recovery from the nearly two-year pandemic.

And that could decide the direction for gold as well, with the yellow metal up 0.5% ahead of Monday’s open in New York, after Friday’s 0.7% gain on safe-haven play. 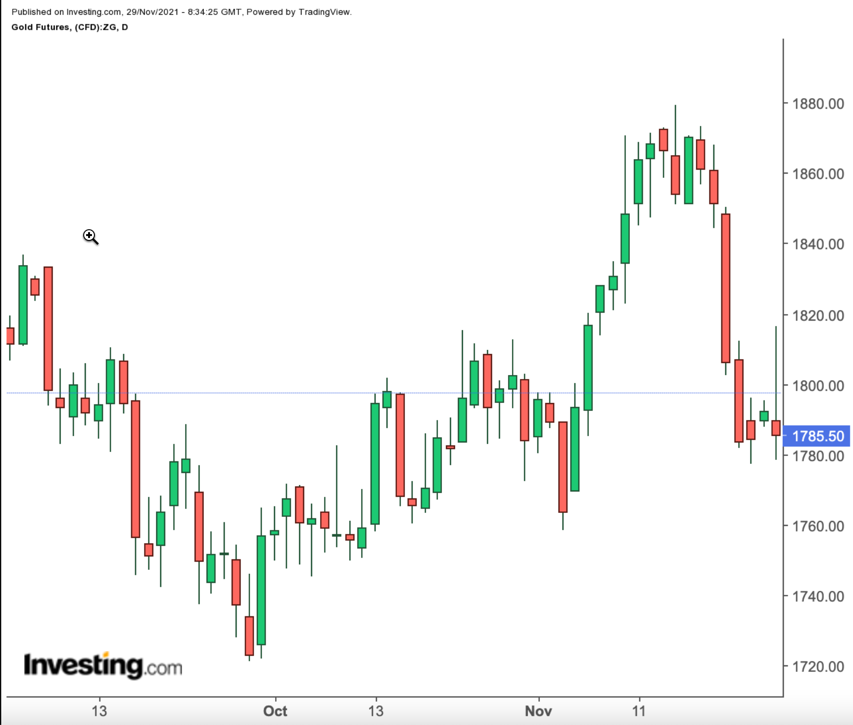 “Gold will have resistance at $1800.00 and $1815.00 to start the week, with the post open spike to $1770.00 an ounce this morning, a dubious move even by Monday Asia futures open standards, will provide initial support,” said OANDA’s Halley.

The new strain of the virus may also raise doubts over how quickly the Federal Reserve can move to unwind stimulus to tackle spiraling inflation.

Against this background, Friday’s US jobs report and testimony on Tuesday by Fed Chair Jerome Powell and Treasury Secretary Janet Yellen will be closely watched.

Before Friday, investors had been upbeat about the strength of the economic recovery amid broad vaccine availability and advances in treatments, despite fears over steadily rising inflation.

A robust November jobs report could underline the case for the Fed to speed up unwinding its $120 billion-a-month stimulus program at its next meeting in mid-December. But a fresh wave of the pandemic could throw those plans into doubt.

Concerns over spiraling inflation, coupled with signs of an accelerating economic recovery had prompted investors to begin pricing in a faster taper and earlier interest rate hikes.

Friday’s nonfarm payrolls report for November is expected to show that the economy added 550,000 jobs, bringing the unemployment rate down slightly to 4.5% .

The economic calendar for the week ahead also features the Institute for Supply Management’s indexes of manufacturing and services , along with data on pending home sales , consumer confidence and the Fed’s Beige Book .

Fed Chair Powell, fresh from his nomination for a second term by President Joseph Biden, is due to testify on the CARES Act, the central bank’s pandemic-era stimulus program, before the Senate Banking Committee in Washington on Tuesday. Treasury Secretary Janet Yellen is also due to testify.

A similar hearing will be held before the House Financial Committee in Congress on Wednesday.